Bear captured on camera as it interrupts BBQ, is shot with tranquilizer and becomes dozy

Driving to her friend's house for a barbecue, Johanna Dalton mentioned to her partner that she hadn't seen a bear since moving to the Crowsnest Pass three years earlier. 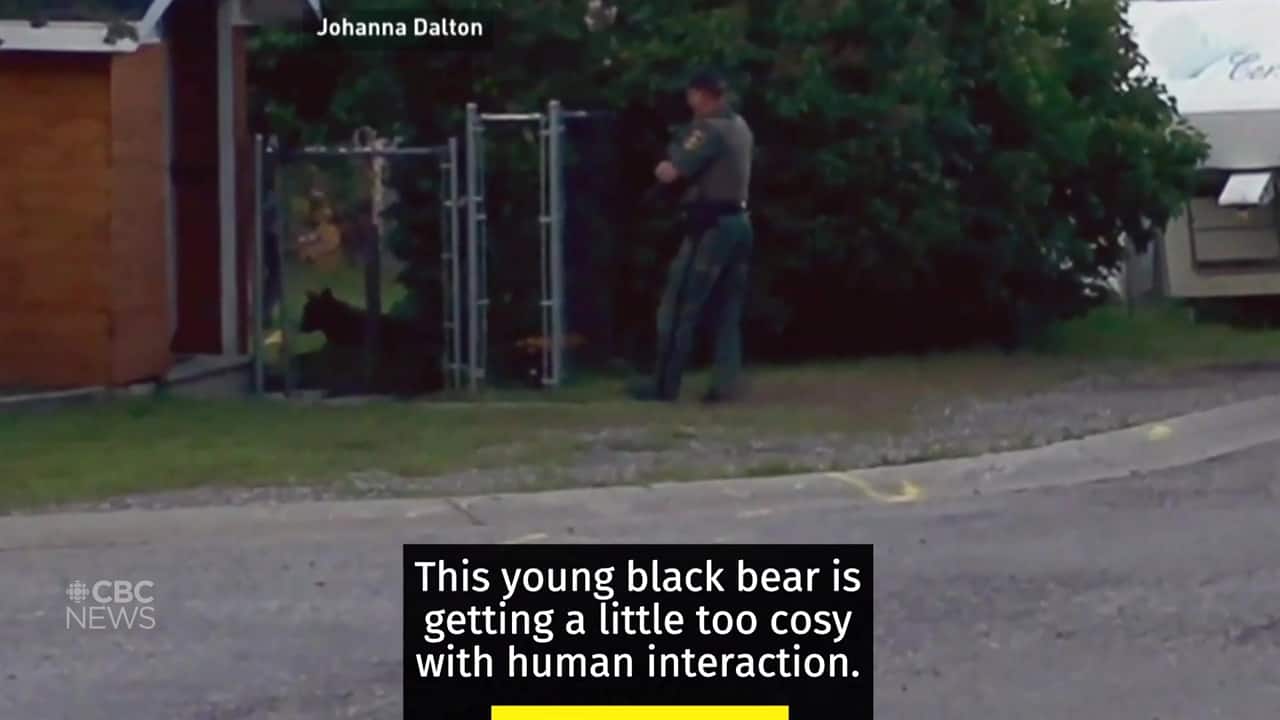 6 months agoVideo
0:55
This three-year-old bear got a little too comfortable being around humans in the Crowsnest Pass 0:55

Driving to her friend's house for a barbecue, Johanna Dalton mentioned to her partner that she hadn't seen a bear since moving to the Crowsnest Pass three years ago.

That streak came to an end shortly after.

While sitting in their friend's yard, someone came over to say there was a bear in a neighbouring property. So Dalton and her group went over to check it out.

She caught the scene on video and continued to film for about a half-hour as an Alberta Fish and Wildlife officer shoots the bear with a tranquilizer dart and the animal bounds off to a nearby creek to battle the effects of the sedative.

"It's not like the movies when it happens instantly," Dalton said of the 20 minutes or so that the bear tried to escape from the creek area.

"He was still very awake, but lethargic, I guess."

Dalton was able to capture the whole scene from a bridge directly over the action.

She said the whole experience was amazing, but that it was hard to watch the animal struggling to get away, unable to get a solid footing due to the tranquillizer.

Eventually, an Alberta Fish and Wildlife officer was able to get close enough to the animal to give it another shot that soon knocked it out.

"There were just too many people around for his safety and for public safety," said John Clarke, district officer for Fish and Wildlife.

Clarke says generally residents are pretty good about hiding attractants, like the bird feeder seen at the start of the video.

"It's a struggle, but this community is doing really well. Some people just need some more education, I guess."

Onlookers, RCMP officers and the Fish and Wildlife officer then carried it up out of the creek bed.

"I got to touch the bear, too," said Dalton. "I never thought I'd get to touch a bear that was alive and not in a scary way."

She's not sure where the bear ended up, but after a checkup and some eye drops, it was taken out of town and released.

Clarke says while this bear was successfully moved, relocating animals is not their first choice.

"Relocation is hard on them because you are dumping them where they have no idea where they are and where their food sources are."

With files from Drew Anderson