'It's not a bad bear': Why Bear 148 is still roaming free after multiple encounters with hikers

Parks Canada says it will be keeping an eye on a grizzly bear after an encounter with a group of hikers and their dog in Banff's Mount Norquay area last weekend. Bear 148 has had many run-ins with humans, but nothing has led to tragedy so far.

Collared grizzly female has had 3 run-ins this spring

Parks Canada says it will be keeping an eye on a grizzly bear after an encounter with a group of hikers and their dog in Banff's Mount Norquay area west of Calgary last weekend.

Officials say the young female grizzly, known as Bear 148, followed the group to a parking lot where they met park staff.

Parks Canada says the bear ranges along the Bow Valley and has had several encounters with people over the years, including three incidents this spring.

Bill Hunt with Parks Canada says she may have reacted to seeing the dog.

"Never, ever any kind of contact incident with a person," he said.

"Like I say, she's vocal and she lets you know she's there and she wants her space, which can be very intimidating from a large grizzly bear but then that's it. If she has an opportunity to leave the zone or get away, that's what she does."

Parks says it's still investigating and may step up tracking efforts on the bear. They are also reminding park visitors to stay bear alert in the backcountry.

It's something that Kenzie Campbell will keep in mind next time he ventures out. He was with two friends and a dog named Momo on Sunday for a hike up to the Cascade amphitheatre near the Mount Norquay ski hill.

"And the first turn we made on the trail head we saw this grizzly bear right there, maybe 20-30 feet away," said Campbell.

The group stopped, but the bear got closer and closer. They decided to let their brave dog Momo off its leash, and she took off. The bear followed closely behind.

"As soon as we saw the bear's back we started running," he said, adding at this point the adrenaline was pumping as the group tried to think about how to survive the situation.

"We were up to our shins in snow, cause it was right at the bottom of the ski hill." 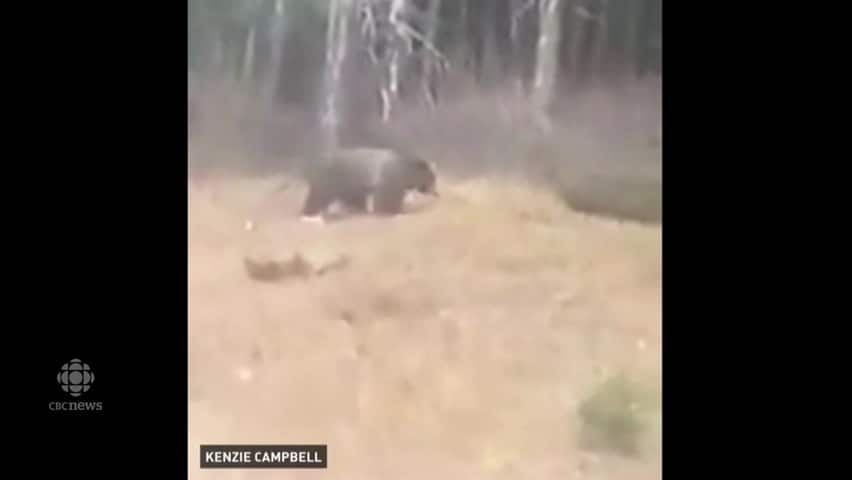 Hikers chased for 20 minutes by Bear 148

4 years ago
0:09
Parks Canada says it will be keeping an eye on a grizzly bear that had an encounter with a group of hikers and their dog in Banff's Mount Norquay area last weekend. 0:09

The dog came back with the grizzly in tow, but the bear seemed to lose interest. They made their way down to the parking lot with the bear still following them, but at a distance.

Parks Canada met them in the lot, but the bear charged again. The group jumped into a Parks truck, since they had no vehicle, and watched the bear roam nearby.

The group was so grateful for Momo, who belongs to Campbell's friend from Wales, that they gave her her favourite treat — broccoli and eggs — that night.

A Canmore, Alta., woman also had an encounter with Bear 148 in April.

She was kick-sledding — a form of dog sledding — on the Spray River Trail that runs behind Banff Springs Hotel when she heard the sound of a large animal behind her.

"She stopped the sled and made her presence known to the bear by yelling and waving her arms to make sure the bear understood that there was a person associated with the sled and the dogs," Hunt said.

Campbell said he heard of the incident, and realizes now he should have taken better precautions, like carrying bear spray.

"It's not a bad bear, just doing what bears do," said Campbell, saying if the bear wanted them dead it would have happened.

A Calgary bear expert says some dogs can cause — not stop — bear attacks on their owners.

Steven Herrero, a world-recognized bear expert, looked at 92 bear attacks in North America over a five-year period. He told CBC News in 2014 that when dogs are off-leash they can attract bears.

Part of the explanation might be that bears and dogs — and their wolf ancestors — are age-old enemies, he said.

Parks Canada advises those who are out enjoying the backcountry to leave their dogs at home or keep them on a leash because dogs can provoke defensive behaviour in bears. Officials also advise people to make noise and to watch for fresh bear signs.

Letting Momo off her leash was a split decision, but it could have saved the group.

"The bear was about 15 feet from my girlfriend, and the dog was barking and growling, so we didn't want to provoke the bear anymore," said Campbell.

"My friend is really happy with Momo. She's pretty proud."