'Time for us to grow up': Big city mayors say Battle of Alberta unhelpful in economic future

Leave the rivalries on the field and the ice because it’s time for Edmonton and Calgary to partner towards a post COVID-19 and post oil-price crash future, and that includes economic diversification. That’s one of the key messages the mayors of those cities want out there and they are, despite stereotypes, on the same page.

Don Iveson and Naheed Nenshi say when their cities are winning, we all do

Leave the rivalries on the field and the ice because it's time for Edmonton and Calgary to partner towards a post COVID-19 and post oil-price crash future, and that includes economic diversification.

That's one of the key messages the mayors of those cities want front and centre and they are — despite stereotypes — on the same page.

"When it comes to jobs and prosperity and inclusion and justice and opportunity, I think it's time for us to grow up and embrace an urban vision of Alberta that is of benefit to the rural areas and all of the regional centres," Edmonton Mayor Don Iveson told West of Centre host Kathleen Petty.

"Over the years the rivalry has gotten a bit out of hand, to the extent our cities have been played off against each other over, and over, and over again in the Alberta political context."

He's talking about treatment by the province and Ottawa, but also the symbolic line that connects the province's two most populous cities: the Queen Elizabeth II Highway and adjacent communities, which include more than three million people and $250-billion of gross domestic product.

"It's a more significant economic and population unit than the B.C. Lower Mainland but we have never allowed ourselves to think that way because of a friendly rivalry that goes back more than 100 years. We need to start thinking about banding together. Crisis is a time to reevaluate who your friends are and who you need to guard against."

Calgary Mayor Naheed Nenshi is driving on the same road.

"We have to see the Queen Elizabeth II Highway between us as a corridor, not a gate that prevents people, ideas and money from flowing back and forth," Nenshi said.

Nenshi says he and his northern counterpart have spent a lot of time getting Ottawa to understand the Alberta experience in recent years.

"It is very jarring, it is very dislocating. It has taken years for Don and I to get that message through. I feel like the federal government is starting to wake up to this but we need the provincial government as well to be partners in all of this."

As one example, Nenshi said Calgary lost out on a huge opportunity that an eastern rival won.

"We lost a bid for a particular company to set up here in Calgary, and there were many reasons," Nenshi said.

"They set up in Halifax. The province and city worked together to land that. We never do that."

Both mayors say going beyond oil and gas is key, regardless of who they have to convince of that.

"Our recovery from this has to include thinking very seriously about economic diversification," Iveson said.

"We have seen the vulnerability and volatility that we are dealing with exploit some of the structural weaknesses to our economy and in turn to Canada's economy. We need to continue to diversify."

Nenshi could not agree more.

"Pre-COVID the Alberta finance minister actually said economic diversification is a luxury we cannot afford in bad times. I cannot imagine a more wrong-headed thing to say as a policy maker," Nenshi said.

"The issue is will. We love the energy sector. We support it. We believe in it. But we also need to work on all of these other things and build on the strengths we have got coming out of the energy sector in order to do that." 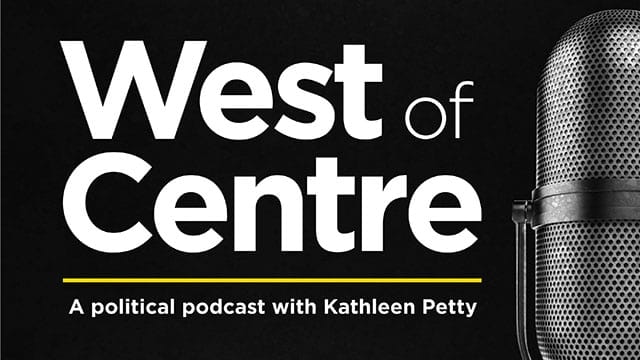 West of Centre33:18Intensive care for Alberta cities
COVID-19 is battering economies in Canada's major cities. While some economists predict a rebound when the virus is contained, Edmonton and Calgary might not be so lucky. On top of the virus and the impact of a shuttered economy, they’re coping with the effects of a collapse in world oil prices and demand while delivering essential services. Revenues have plummeted and cities can't run deficits. Kathleen Petty talks to Edmonton mayor Don Iveson and Calgary mayor Naheed Nenshi about the unique challenges for Alberta’s two largest cities. 33:18

Iveson said there is a change on the horizon and it's needed.

"There is beginning to be a recognition that we have to have a different economic strategy than betting everything on energy, which is really not working out well for us now."

Nenshi said Alberta is in a unique position compared to other provinces.

"We are the only province that has two large cities of roughly the same size," he said.

"Competition is still healthy. We should compete with one another because it makes each of us stronger. But ultimately, for Canada the nation to work, the province has to work and for Alberta to work, Edmonton and Calgary both have to work."

With files from Kathleen Petty and West of Centre