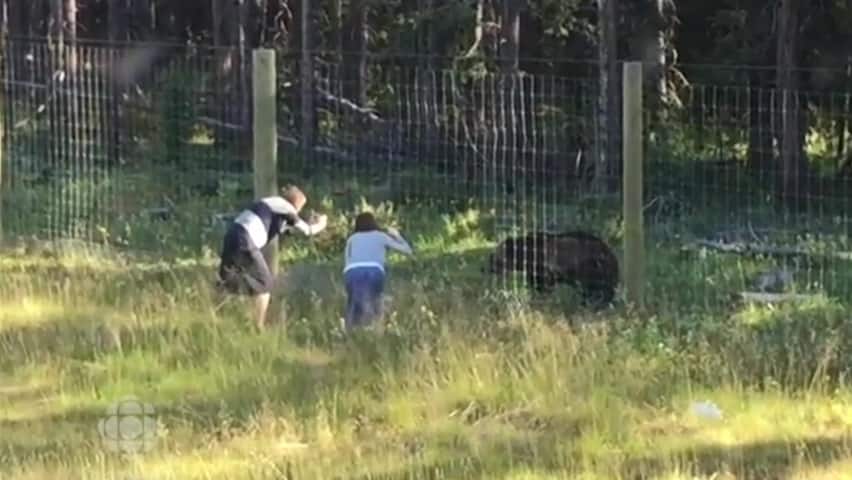 Mark Sawlor says he couldn't believe how close people got to a grizzly bear in on July 5, 2017 in Banff National Park. Parks Canada says visitors should stay 100 metres away when taking pictures of bears.

3 years ago
0:41
Mark Sawlor says he couldn't believe how close people got to a grizzly bear in Banff National Park 0:41

The Sawlor family wanted to see a grizzly bear while on vacation in Alberta and got their wish while driving from Banff to Lake Louise.

But Mark Sawlor says he couldn't believe how close some tourists got to the wild predator with only a wire mesh fence for protection.

"We saw some cars on the side of the road and thought there was a bear there, so we pulled over," Sawlor said.

The family from Nova Scotia was on the way to Lake Louise for a canoe trip on Wednesday and took a pit stop to record video of the bear.

Sawlor said that within minutes more than a dozen people were out of their cars on the side of the Trans-Canada getting dangerously close to the animal.

"It was like they felt that fence was going to protect them somehow," Sawlor said. "People were turning their back to the bear … I think they broke every rule there are around bear encounters."

"The more people that gathered, the safer they felt," Sawlor said. "I was just really concerned, I didn't want my kids to see anyone get hurt."

There have been a number of incidents in recent weeks of people getting too close to wildlife in Banff National Park.

On June 25, a tourist walked right up to a grizzly on the side of a road in what appeared to be an attempt at a grizzly bear selfie. The encounter was caught on video by another photographer with a telephoto lens shooting from a safe distance.

Parks Canada advises people to keep their distance from wildlife.

Visitors are asked to stay 30 metres away from elk, deer, bighorn sheep and mountain goats and 100 metres for bears, wolves and cougars.

It is illegal to feed, entice or disturb wildlife in a national park. The maximum penalty is $25,000.