Bison turn up bones of their ancestors, old wallowing spots in return to Banff 140 years later

Bisons' hooves are turning up the soil of Banff National Park to reveal the bones of their ancestors that trod the same land more than 140 years ago, Banff town council heard Monday in an update on the animal's reintroduction project. 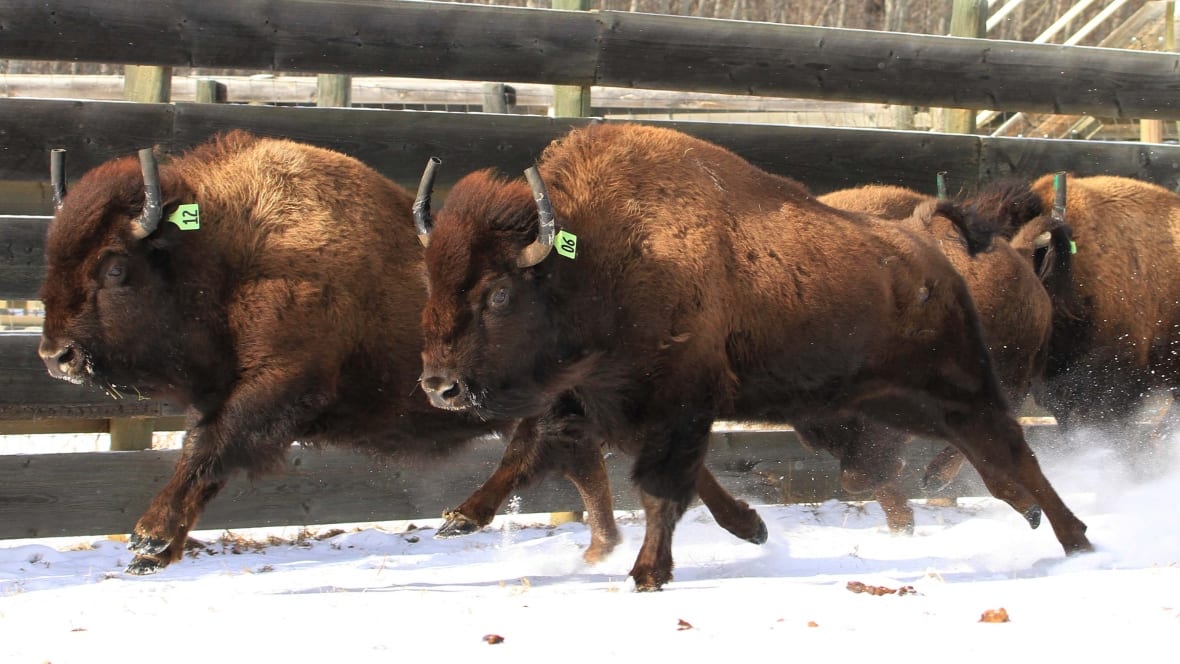 Bison helicoptered in to Banff for historic homecoming after 140 years

4 years agoVideo
0:35
After years of consultations and detailed planning, Parks Canada officially reintroduced 16 bison in Banff National Park in what is being called a “historic homecoming” and an important conservation effort as part of Canada’s 150th anniversary year. 0:35

Bisons' hooves are turning up the soil of Banff National Park to reveal the bones of their ancestors that trod the same land more than 140 years ago, Banff town council heard Monday in an update on the animal's reintroduction project.

Parks Canada is at the halfway point of a five-year pilot project, which aims to test the reintroduction of wild plains bison to the park's ecosystem.

The project began in February 2017, when 16 bison were relocated from Elk Island National Park, east of Edmonton. The large ungulates were moved to a fenced pasture in the remote Panther River Valley, about 40 kilometres north of the Banff townsite.

The animals now number 36 and are roaming free in a 1,200-square-kilometre reintroduction zone. The herd population is expected to surpass 300 by 2031.

"They're revisiting many of the areas their ancestors did and as they're literally grazing down the grasses in places, they're revealing old wallow spots that would have been there from hundreds, or even thousands, of years ago and in fact they're reactivating them," said Karsten Heuer, the manager of the bison reintroduction project.

Heuer said the wallows are reactivating the ecosystem by tempting birds back to the meadows, and creating itinerant habitats for amphibians that love the puddles created by the imprints left as bison roll in the grass.

And, in one instance, staff following a trail created by the bison found a skull of one of the animal's predecessors.

Bison used to be abundant on the Great Plains, which stretch from north of Edmonton down to Texas. Small numbers roamed what is now Banff National Park for 10,000 years until they were nearly driven to extinction by human activity prior to the park's creation in 1885.

"This is kind of neat to learn our lessons, to reverse a historic wrong on a small scale … and then hopefully inspire other similar projects," Heuer said.

Heuer told council it's been powerful to witness their return, both for ecological reasons and for the cultural significance the bison have for Indigenous people.

"It's hard to explain without maybe sounding a bit cliché, but bison are to the First Nations cultures around here what the salmon were to the coastal and caribou were to the northern cultures … to witness that hope and sense of rejuvenation is pretty powerful."

Heuer said it's too early to say for sure, but his personal opinion is that the experiment is going well. The animals are largely healthy, and just one calf has died from what's believed to be natural causes.

Wolves have largely left the bison alone as well.

Heuer said in 2022, Parks Canada will assess if longer term restoration of the animals to the park is feasible. If not, the animals, and fences, will be removed.