A student scared to be at school shared a video of a packed hallway at Central Memorial High School, while students at Bowness High School weigh in on how they are feeling and school safety measures. 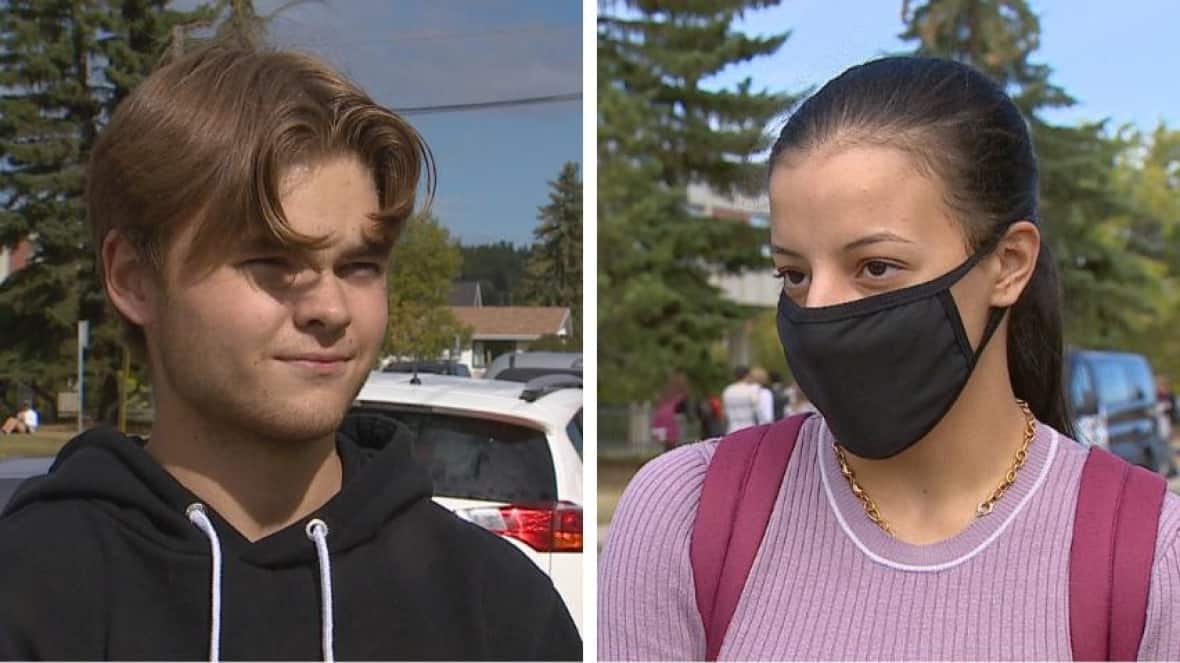 2 months ago
4:10
The principal of Bowness High School had some strong words for the Alberta government after discovering a case of COVID-19. Find out how the students there feel as some students were forced into quarantine. 4:10

Within the first 10 days of reopening, at least 16 infectious cases of COVID-19 have been identified in schools across the province and outbreaks were reported at three schools.

It's been a nerve-wracking back-to-school transition for parents and teachers. But are the kids all right?

From angered and scared to not very fussed, it depends on whom you ask.

Since classes resumed Sept. 1, public health measures have been in place to suppress transmission of the virus in schools.

These include physical distancing, mandatory masking when distancing cannot be maintained, enhanced cleaning procedures and daily screenings for symptoms.

But cases have surfaced, including someone at Bowness High School who tested positive for COVID-19 on Sept. 5, which a parent says prompted an entire classroom to isolate for 14 days.

Days later, trepidation lingers for some at the school, while others are heartened by the measures the school has been taking.

"When I found out that they [the confirmed case] weren't in any of my classes, it made me feel a lot better," Grade 12 student Faith Long, 17, told CBC News on Tuesday.

Meera Mahram is also in Grade 12 at Bowness High School, and like Long, she feels unnerved.

Carter Bird, 16, is a Grade 11 student who says he isn't too afraid to be back. People certainly congregate, but Bowness High is doing everything it can for the students, he says.

"Our school had been trying pretty hard to, you know, keep us safe," Bird said.

"We've been wearing a mask, sanitizing. We wipe down all of our, you know, high touch areas every single time we're finished in class. So, we're definitely trying our best."

Physical distancing a challenge inside

Alberta's chief medical officer of health, Dr. Deena Hinshaw, said on Tuesday that the province is not surprised to see cases of COVID-19 in schools.

On Wednesday, Alberta launched an online map to help parents track COVID-19 cases in schools across the province.

"We have known that with opening schools in person, it was absolutely expected that there would be infectious cases," Hinshaw said.

Dr. Vanessa Meier-Stephenson, an infectious diseases physician who works with the University of Calgary, isn't surprised by the cases, either.

She expected to see the virus in schools because the province has reported high community transmission in recent weeks, and active cases that approached 1,700 after the Labour Day long weekend — the highest since May 9.

"The individuals who currently have infections now obviously didn't get it from schools, so they got it from the community," Meier-Stephenson said.

"The catch … now is to make sure that we're preventing any spread in the school setting."

Outside the medical community, someone who also expected a case is Emma Reimer, a Bowness Grade 12 student — though she was taken aback by how quickly it happened.

"I kind of knew it was coming … because [of] just the lack of social distancing. But I didn't think that there would be a case as soon," said the 17-year-old.

"I didn't really want to go to school today because of it, but it seems like we're doing better right now."

The number of students in the school makes everything a bit crowded, Reimer says. Precautions have been taken to streamline traffic areas, but the volume of students is still high, making physical distancing a challenge.

"It's better since we have two-way traffic and we have designated stairwells to go up and down," Reimer said. "But there is a lot of kids in the school still, and it's still a problem."

That there are lots of kids in the school — and the strain that puts on the ability to physically distance — is not a problem unique to Bowness High School.

A photo obtained by CBC News shows students — many who appear to be wearing masks — packed in halls at Sir Winston Churchill.

And at Central Memorial High School, one student says they feel some of the safety measures are not enforced.

They shared a video with CBC News of students packed into a crowded hallway, and CBC News has agreed to withhold the student's name over concerns it could affect his academic standing.

The short, two-second clip shows a crowd of approximately 200 students passing each other elbow-to-elbow and lingering in a hallway.

All of the students appear to be wearing masks, but few seem to be maintaining even 10 centimetres distance from each other — let alone the recommended two metres.

"I don't feel safe at school," the student said.

"In the hallways as well, there's no staggered entries, or staggered class changes or lunches. It's like a free for all.

"We do have one-way hallways and directions but they aren't really followed. Sometimes I feel our school put them in place just so we can say we have those. But no one really follows them."

The student says the situation in classrooms, most of which have 30 to 40 students, isn't much better.

"Some teachers are really good about having kids sanitize their hands ... and then other teachers are talking about how they give their students mask breaks and how they are not going to wear masks when they talk to us when they are presenting," they said.

"It angers me knowing that people who are supposed to be there to protect us aren't enforcing rules or are being bad examples for kids."

CBC News shared the video shot at Central Memorial High School with the Calgary Board of Education (CBE) and the provincial government, and both issued statements.

"As we move through the school year, we all share a responsibility to follow safety measures for ourselves and others. As shared by Alberta Health Services, we cannot stop COVID-19 from entering our schools, but we can minimize the risk of infection and spread," the CBE's statement read in part.

"To this end, Calgary Board of Education will approach safety measures from the perspective of helping students learn new behaviours and strategies to stay healthy in a world where COVID-19 continues to be a threat."

Colin Aitchison, the press secretary to Education Minister Adriana LaGrange, says that guidelines, including physical distancing, need to be followed, but are managed by each school and school authority.

"All students and staff are expected to follow the public health guidelines that have been set out for schools, including social distancing guidelines," part of Aitchison's statement read.

"Regarding distancing, many schools are adjusting their daily calendars to allow for staggered bell times to minimize traffic in the hallways. Since situations will vary from school to school, this is a decision each school and school authority will have to make together."

Schools would also be inspected by Occupational Health & Safety under Alberta Labour and Immigration to ensure they are following public health measures, he says.

"If a teacher, staff member, parent or student feels that their school is not following provincial guidelines, we would encourage them to raise their concerns with their principal or school board trustee."

Safety measures followed inside, not outside, students say

At Bowness High School, both Faith Long and Meera Mahram say that inside the school, COVID-19 safety measures are well-followed, surfaces are sanitized and masks are worn.

It is outside, they say, that the vigilance deteriorates.

"I think everybody's doing well in the school, but like outside of school, everybody takes the mask off and no one really follows the protocols," Mahram said.

Dr. Hinshaw acknowledged this trend in a briefing on Sept. 8.

"We've seen with school reopening that students who are understandably excited to see each other are perhaps forgetting that COVID-19 doesn't just live in the school," Hinshaw said.

"You know, the risk is probably higher as they step out of the doors and then start to congregate socially."

Long says she has seen social media videos that show the same behaviour in other high schools, and worries it will perpetuate transmission of the virus.

"They know that once they get outside the school, that they don't have to wear masks and the teachers can't make them wear a mask," Long said.

"I believe that's one of the reasons why the cases are going to increase — not just at our school, but in all schools.… And I think that kids need to be, to make sure the spread doesn't increase."

However, Long says that ultimately, the school is doing as well as it can with the resources that it has — though it should have had more.

"I think that they've done whatever they can, judging by what they've been given, even though they could do a lot better if they were given more support from the government," Long said.

"There is no world in which you could reduce class sizes in half and reopen the schools for the current school year.... It's simply fictitious. It has nothing to do with reality," Kenney said at the time.

Last weekend, after the COVID-19 case at Bowness High was confirmed, principal Jana Macdonald expressed frustration at the provincial government in a social media post, and invited Kenney and LaGrange to visit the school.

Long says that if Kenney and LaGrange took the principal up on her offer, they would understand more help is needed.

"I think they would see that what they're saying the schools should do isn't enough," Long said.

"That they need to hire more teachers to make social distancing possible in classes, and wearing masks isn't just enough, and doing split-up lunches isn't enough, so that there aren't cases in the school."