Similar walkouts occurred at dozens of schools across the city 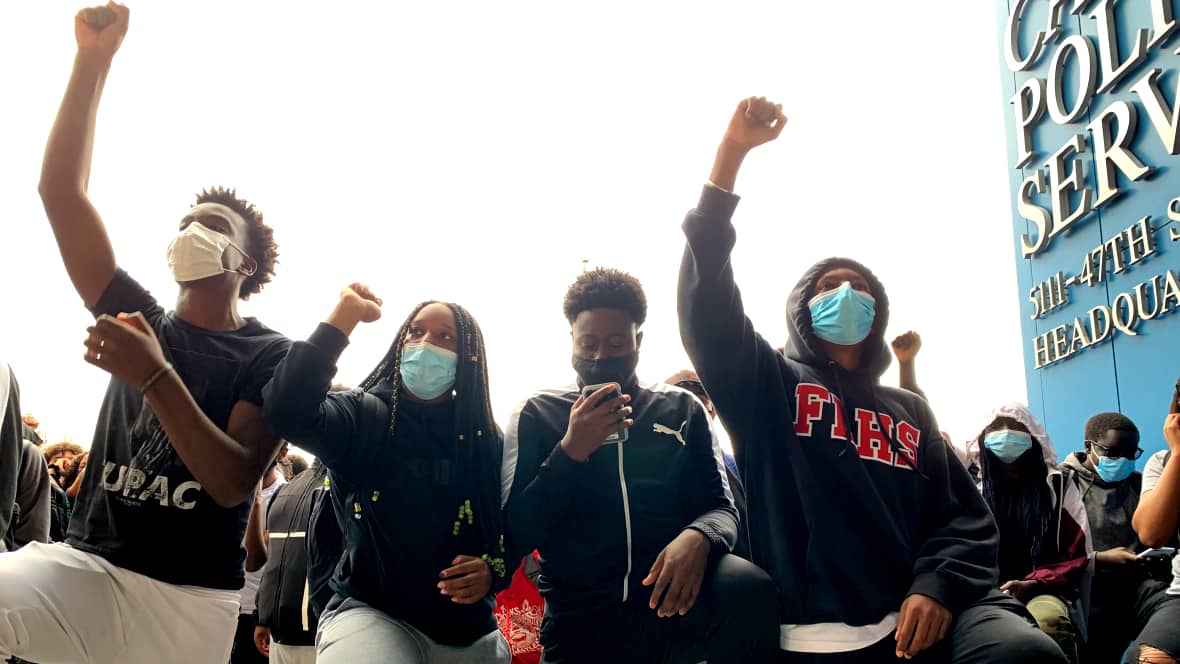 4 months agoVideo
2:04
Bishop McNally students ended their anti-racism walkout with a peaceful sit-in outside Calgary police's headquarters on Oct. 8. Find out what started it. 2:04

Students organized the walkout after two recordings began circulating online of staff from the school district using the N-word.

"It's such a derogatory term and it needs to be stopped by Black people, by all types of people," said 16-year-old student McArthur Hilton. "I don't appreciate that from an older person who is supposed to be an example to us. As students will also look up to the teachers doing the right thing, and they should not be using that word at all."

One of the incidents occurred at St. Michael School two weeks ago. Four students were suspended for recording principal Lianne Anderson's remarks without her knowledge and posting it online — something the school board said violates the student code of conduct.

The other incident occurred at Bishop McNally in the past two years, but the video of the incident only recently began making rounds on social media.

The Catholic school district has since apologized for both situations.

"While we can't discuss any specific personnel situations due to privacy concerns, we can tell you that we apologize and our hearts go out to any student or staff member ever impacted by systemic racism," said chief superintendent Bryan Szumlas in an emailed statement.

"We take every situation seriously and will investigate each individually to ensure a positive outcome that aligns with our faith."

In a statement to CBC News, Alberta Education said these situations are unacceptable.

"Period. We do not condone it, And frankly, it shouldn't come as a surprise to anyone in the education system that this is completely unacceptable and inappropriate," said press secretary Colin Aitchison in an email.

"It is our expectation that the school division will take steps to listen to their community and work to ensure safe, welcoming and caring learning environments for all of their students and staff."

Students said it was important for them to walk out this morning to show the school board officials and school administration that they have voices and want real change.

"It's important to walk out today because that's all we can do. We can't do a lot in the world, you know, we're youth who are 16, 17, 18 years old in high school," said Hilton. "We just have to fight for our rights every day, and to be honest, if things aren't changing here, we're going to do the same thing every day until something changes."

Supported by Sankofa Arts and Music Foundation — a local non-profit that uses art and music as tools for social change — students put together a list of demands for the school district.

Those demands include the development of an anti-racism task force that includes students and parents, as well as the delivery of anti-racism training for all students and staff and acknowledgement of past failures.

"We want concrete and immediate standards of language across the board," said Marion Ashton with the Sankofa Foundation. "To be an educator and to use that word with our children, it's not OK. We need clear standards to be set."

Ashton said students are also demanding that the school district research and collect data about the problems associated with Black students' experiences in the school system.

"The experiences that they talk about, it's not a fragment of their imaginations," she said.  "We need some research now across the board."

Students said they would also like to see themselves and their cultures more accurately represented in curriculum and staffing.

"In all the Calgary Catholic schools I've been to, I've never had a Black teacher. I really never had Black teachers in all my years," said Grade 11 student Audrey Micah.

"And we should start to learn about who Black people are, who we are at our base. You know, we created so many things. We have successes, we're talented people, we're smart, but we're overlooked. It's never taught in the curriculum in schools."

Ashton said educators found to be using racist language should be fired.

"We need them to be fired," she said. "Adults work with the most vulnerable in society, our children, and we know how they behave. They don't know how to act. They don't care about the impact of the word."

McNally students ended their walkout nearby at the city police headquarters, where they discussed issues they see at school and in society with senior Const. Craig Collins, the hate crime co-ordinator for the Calgary Police Service.

"It's a really powerful message. There's been so many articulate conversations that I've had with the group and so forth," he said. "I'm not in the least bit surprised. It's encouraging. And I think it's a serious thing that we encourage people to have that belief to be safe, lawful, peaceful, which is exactly what it was."

Similar walkouts occurred at the same time as McNally's at dozens of other Catholic and Calgary Board of Education high schools across the city.

The Catholic school district said it was aware of student demonstrations that took place across Calgary today.

"We hear the voices of our students concerning this important matter," said Szumlas.

"There is work to be done in our district on systemic racism. In consultation with stakeholders, we will work on professional development for all our staff and on information for our families. Each and every one of us has a role to play in the fight against racism."

The CBE said it was aware of the student walkout scheduled for Thursday morning.

"We do not have information available at this time regarding the number of schools or students who participated. This was not a CBE event, and as such, we did not promote it," said the CBE in an email.

"We did not prevent our students from leaving class during this time; however, any students who were not present in class were marked as an unexcused absence."

The board said it works with school communities to create welcoming, caring, respectful and safe learning environments for all students.

"We recognize the importance of public schools in creating a stronger democracy and the right of students to advocate for important causes."