The family of a Calgary man killed in a plane crash in Antarctica says they don't want anyone risking their lives to do the recovery.

Calgarian Michael Denton, 25, among those killed in mountain crash 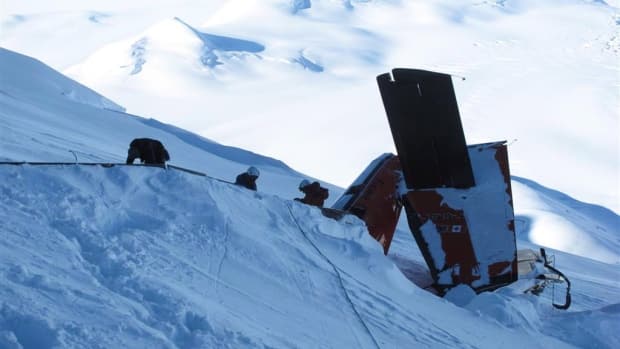 7 years agoVideo
2:54
The family of a Calgary man killed in a plane crash in Antarctica is asking that their son's body be left where it is. 2:54

The family of a Calgary man killed in a plane crash in Antarctica says they don't want anyone risking their lives to recover the body of their loved one.

Michael Denton, 25, died in January when the Twin Otter plane he was flying in with two other Canadians for Kenn Borek Air crashed into one of the highest mountains in Antarctica. With the summer season starting on the bottom of the world, there is discussion around whether to try recovering the bodies.

We know where they are, and they are buried in the most spectacular, beautiful place you could ever be.- Carol Denton, victim's mother

Denton's mother says no one should be put at risk.

"We really do not want anybody else risking their lives to do the recovery, and I know that's not something Mike would want," said Carol Denton.

"They're buried in a very sacred spot, and a beautiful spot, and it does bring us a lot of peace knowing that."

Search and rescue operators from New Zealand helped in the initial search for the plane but were not able to access the three bodies.

Crews found the plane's tail and top right wing sticking out of the snow and were able to retrieve a voice recorder and GPS unit.

However, the cockpit was blocked by crumbled cargo and fuel tanks and it was deemed too risky to stay any longer.

"His life dream has always been to go to the Antarctic and also to fly Twin Otters," Denton said.

As a child, Michael and the family used to drive to the airport near their home and watch the planes take off. The love of flying is something that might have come from his father, who had his pilot's licence, says Denton.

Michael was the plane's first officer and at the time of the crash was newly married to a woman he had been with for seven years.

"[It was] probably a relationship that many people don't experience," Denton said.

"They were extremely connected and close, so he really did live a full and rich life — it just was too short."

Michael had flown for Kenn Borek Air in northern Canada and Denton says he was thrilled to be paired with Bob Heath, one of his fellow crash victims and a highly experienced pilot.

"He was ecstatic — the things that they would see and just the experience of being there was quite something," Denton said. "You could tell that's just what he really wanted to do ... that certainly gives us comfort."

Many of Michael's items lost in flood

The family lost most of Michael's personal memorabilia in June's flood but were able to save some photographs.

While having the bodies so far away makes it harder for the family to come to terms with Michael's death, Denton says they are extremely grateful to the initial search and rescue crew that made it to the crash site and was able to recover some personal items and identification.

"The people involved and the stages that they had to go through, we just absolutely were so grateful, extremely grateful, because I think knowing that they actually got in the plane has brought huge closure for me ... we could be sitting here not knowing where that site was," Denton said.

"We know where they are, and they are buried in the most spectacular, beautiful place you could ever be."