The Alberta government is joining the fray to help Edmonton and Calgary bid for retail giant Amazon's second headquarters.

Amazon looking to open second North American office, with potential for over $5B in investment and 50K jobs 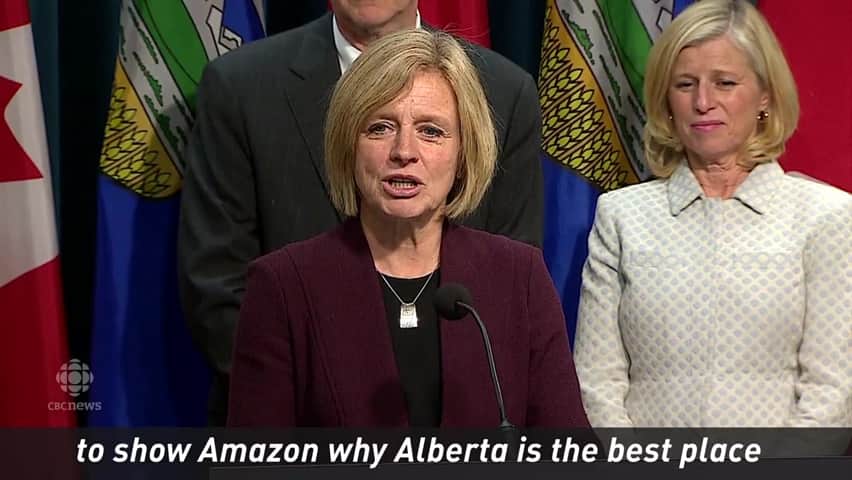 Notley's pitch to Amazon for an Alberta HQ2

The Alberta government is joining the fray to help Edmonton and Calgary bid for retail giant Amazon's second headquarters.

Premier Rachel Notley says a consultation team of business and academic leaders will assist the cities to make the best bids possible.

"Our object is to get that headquarters into this province," Notley said Monday. "We brought this group together to give us the best advice possible for how we as a provincial government can support the bids effectively.

"Also to ensure that we co-ordinate effectively with the federal government to make sure that they are at the table as quickly as possible and in a way that ensures Alberta's interests are properly represented."

Amazon announced earlier this month it is opening a second North American office, spending $5 billion and hiring as many as 50,000 employees.

The company said it wants to be near a metropolitan area with more than a million people, have access to top technical talent, be near an international airport, have direct access to mass transit, and have space to expand over the next decade.

Alberta's low tax regime, young workforce and network of post-secondary institutions should put it among the top 10 per cent of bidders, Notley said.

Amazon's current Seattle home has more than 40,000 employees, 33 buildings and 24 restaurants. Amazon is taking bids until Oct. 19 and will make a decision next year.

Cities from across North America are scrambling to bid.

Other cities scrambling to bid

Manitoba Premier Brian Pallister has already reached out to political and business leaders, saying he wants a "Team Manitoba" effort to lure Amazon to Winnipeg.

Ed Clark, who is heading up Ontario's Amazon bid, has said while the province would consider sensible incentives, it will not offer billions in subsidies to the e-commerce giant. Clark said that wouldn't be fair to other firms.

Notley wouldn't say if Alberta's bid will include financial incentives or loan guarantees. She would only say the package has to make overall sense for Alberta and for its economy.