A giant Amazon warehouse is nearing completion just north of Calgary and the company is looking to fill more than 1,000 full-time positions for when operations begin later this year.

Tech giant's investment 'a sign of some good times that may be coming forward,' says city councillor 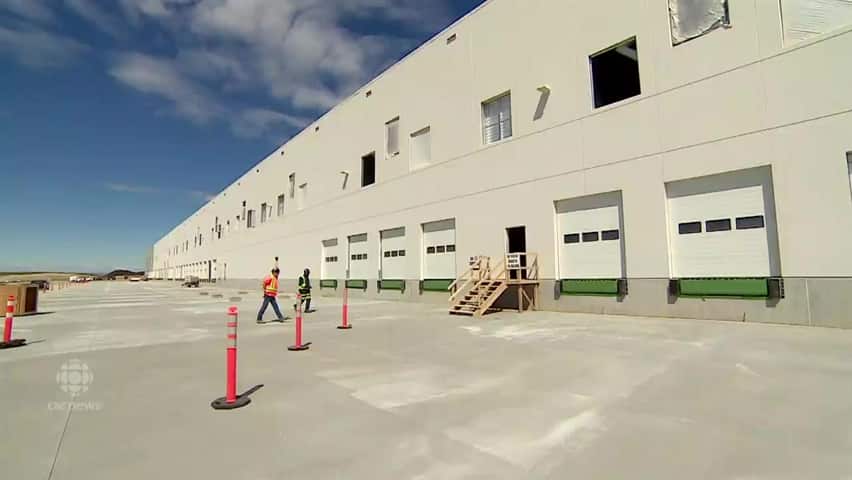 A giant Amazon warehouse is nearing completion just north of Calgary and the company is looking to fill more than 1,000 full-time positions for when operations begin later this year.

On Tuesday morning, media were given a hard-hat tour of the massive 600,000-square-foot warehouse in Balzac. The facility will receive, sort and pack all manner of items for delivery in Western Canada.

Jas Khangura, general manager of the facility, said Amazon is searching for employees to package orders, manage human resources and oversee mechanical and engineering components once the warehouse is up and running.

Speaking at the event, Calgary Coun. George Chahal said the facility is "a sign of some good times that may be coming forward" for the city.

"This is all of the Calgary region working together to bring in this great employer, Amazon, who's gonna bring a lot of great jobs, well-paying, good jobs to our communities," said the Ward 5 representative.

"Hopefully, with Amazon coming here, other large multinationals will also see the great advantages we have in the Calgary region," Chahal said.

At times, crews of 40 to 70 people were simultaneously shovelling snow off the massive area so that construction could continue, he said.

"This was a tremendous task, and in my 12 years of experience have never seen a crew work so hard to keep the project's schedule, no matter what challenge Mother Nature presented," Fried said.

The warehouse has more than 5.5 kilometres of conveyor belts and was built with 2,438 tons of steel, roughly equivalent to the weight of 850 Ford F-150 trucks.

Using complex technology, the conveyor belts and routers help direct the flow of traffic and accurately transport items throughout the centre.

"Think of it as a continuous train," said Steve McElweenie, vice-president at Honeywell Intelligrated Canada. "You induct packages on to it, and it goes in a continuous loop, and there's various discharges around the sorter itself."

This fulfilment centre will complement a larger Canadian network of Amazon distribution warehouses already running in several locations in Ontario and B.C.