A small Alberta town’s attempt to discourage geese from too getting comfortable there took flight about six weeks ago, but it’s getting mixed reviews and ruffling some feathers.

But critics say leave them alone, they were here first 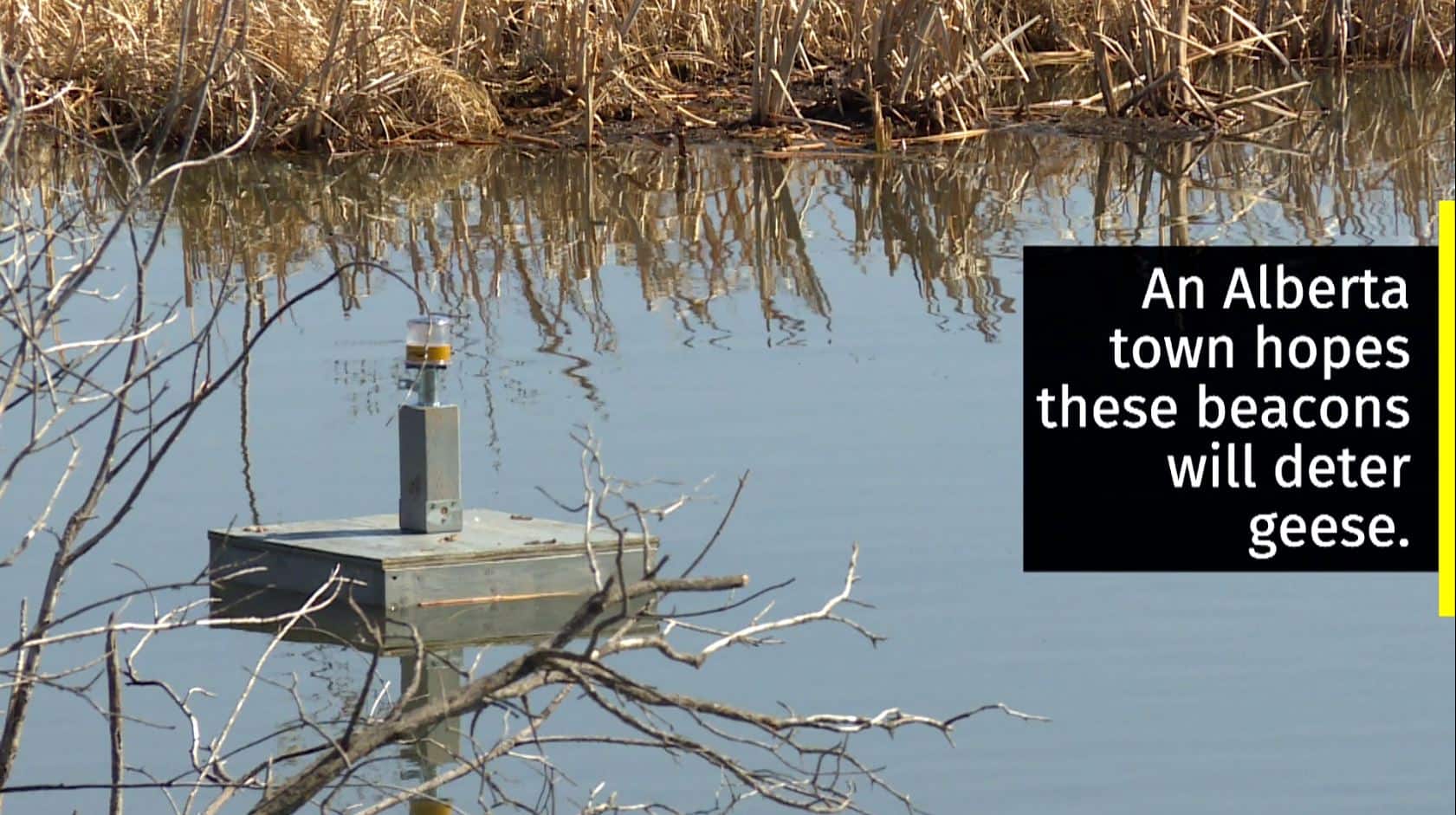 A small Alberta town's attempt to discourage geese from getting too comfortable took flight about six weeks ago, but it's ruffling some feathers.

The parks manager for Blackfalds, Alta., just north of Red Deer, says the town is dealing with an influx of geese that poop everywhere and can be aggressive at times.

"They have been causing some grief to the public and to our infrastructure," Jeff Heindel told CBC News.

The numbers have been creeping up, especially in parks with ponds and lakes, for the past five years.

Heindel says there have been complaints, including one from a resident who had around 30 or 40 geese on their front lawn.

The town tried fences and even some creative landscaping, but the birds wouldn't budge.

"Unfortunately, we have some residents who are feeding the geese. If they get food, they are going to keep coming back," Heindel said.

So about six weeks ago, after a lot of research, the town set up six floating beacons on the pond in the McKay Ranch area.

The solar-powered devices collect energy during the day and become flashing lights at night, which makes the birds uncomfortable.

"They make the site not a place where the geese want to rest at night," Heindel said.

"They are distracted by the light and they can't see their predators."

But when the town shared the pilot project on social media, there were lots of keyboard critics.

"It was pretty negative," Heindel said.

"It was disappointing because our crew and our town love wildlife and we have no intention of pushing wildlife out of our community. But we want to keep our parks and trails safe for all users."

You can likely include Jeff Derrick as a critic.

"Why are we pushing them out of their natural habitat?" the five-year resident said.

"We come in. There is a nice pond here. We build houses all around it."

Derrick says people he talks to are generally against mitigation efforts.

"It is only a couple of months a year that they are here and then they are gone. A lot of the community says, 'Don't do it. Let them be.'"

Another resident, Heather Wassink, says that while her young children like the geese, she understands the challenge the town faces.

"My youngest, he's almost a year old now, he's learned his first bird sign. When he hears the geese, he's got his hands up in the air doing the bird sign," Wassink said.

"But I am hoping it will be effective," she said of the beacon project.

"It's not always great walking through the paths with goose poop everywhere. I appreciate it [the beacon project]. It's non invasive. It's not a crazy expensive option. It won't muddle up the landscape. It is not a big fence."

"In our opinion, the numbers are a little bit lower in this space right now compared to last year," he said of the McKay Ranch area.

And he points out, the beacons are just one option. The project will be assessed in the fall.

"We are trying some humane ways to have some control over the numbers, and this is just one tool we are trying," he said.

"It doesn't hurt the geese. It just doesn't make them feel secure, so they don't want to raise their goose family here."