4 tornadoes touched down in Alberta on Tuesday, Environment Canada says

Four tornadoes briefly touched down but it's believed there was no damage. The tornadoes were given a preliminary rating of EF0, which is the lowest rating on the Enhanced Fujita scale.

It's believed the twisters didn't cause any damage

Four tornadoes touched down in Alberta on Tuesday.

Environment Canada confirmed Wednesday that four tornadoes were observed, according to its preliminary weather summary:

All tornadoes were brief and it's believed there was no damage, The twisters were given a preliminary rating of EF0, which is the lowest rating on the Enhanced Fujita scale. 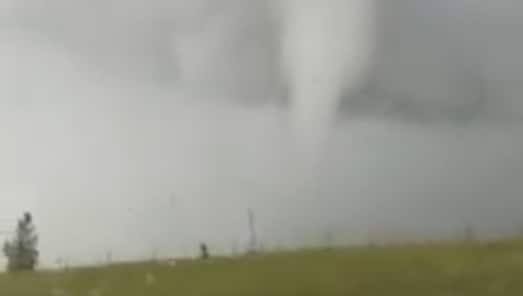 Funnel cloud appears along Highway 1 near Brooks on Tuesday

8 months ago
1:08
Darcie Smith captured this video from the passenger seat of her truck. 1:08

An alert on Tuesday evening had cautioned that the tornadoes were likely to lift and touch down multiple times before dissipating, and that the weak tornadoes could appear as funnel clouds with swirling debris near the ground.

Environment Canada said multiple funnel clouds were observed across a large area of Alberta on Tuesday evening, and that its meteorologists are seeking photos of the clouds or any damage caused. Anyone with photos is asked to call 1-800-239-0484, email abstorm@canada.ca, or tweet using the hashtag #abstorm.

On Wednesday afternoon, weather advisories stated that conditions could be favourable for the development of funnel clouds in northwest Alberta, near Grande Prairie and Peace River.

And wind advisories were in place for the southeastern part of the province, with gusts of up to 100 km/h expected near Medicine Hat and Hanna.

Alberta has seen plenty of extreme weather so far this summer, including Calgary's mid-June hailstorm that is the fourth-costliest natural disaster in Canada's history.