The anger is real, but is western separatism?

Since last week's federal election returned Justin Trudeau's Liberals to power, with no seats in Alberta and Saskatchewan, the anger in Alberta seems to have intensified. Western separatism is again being bandied about.

There's no denying the anger in the west, but quantifying what that means for Confederation isn't so easy

Let's see if you've heard this one before: there's a Trudeau in the Prime Minister's Office and he's angered a lot of Albertans and the oilpatch. Alienation and resentment fester, triggering separatist sentiment.

In 1980, there were no Liberal MPs from Alberta, Saskatchewan or B.C. in Ottawa, and a separatist actually won a provincial seat in an Alberta byelection (but lost it within months).

Since last week's federal election returned Justin Trudeau's Liberals to power, with no seats in Alberta and Saskatchewan, the anger in Alberta seems to have climbed from its already considerable heights. Western separatism is again being bandied about.

But how substantial, or how real, are those sentiments, and what does that mean for Alberta, the West and Confederation?

It's hard to quantify whether online venting is a real thing that could transform into Albertans actually wanting to break away from the rest of Canada.  Still, there's no doubting the animosity and impatience Albertans have for Ottawa these days.

One thing that is not up for debate is there is real anger in Alberta.

Many in the heart of Canada's stubbornly sluggish energy economy feel — justly or not — that the federal government has been actively undermining the industry Alberta is so dependent on.

"Because they see things like this tanker ban on one coast but not on the other and start to wonder: 'Well, what has Alberta done to deserve being targeted by its own federal government to essentially shut down its oil and gas economy?'"

The list of grievances is long: There's new legislation on environmental reviews of large industrial projects like pipelines, which Alberta Premier Jason Kenney calls the "no-more-pipelines act;" there's the aforementioned tanker ban on the northern West Coast; and there's also frustration with equalization payments that some Albertans feel are too high (due, it should be noted, to our higher earnings.)

A fiscal stabilization fund that funnels money into provinces when their GDP nosedives is out of date and provided a relative pittance when the price of oil cratered.

Then, there's the dreaded carbon tax.

For weeks this past winter, angry protestors in yellow safety vests lined the byways and highways of the Prairies demonstrating against a laundry list of grievances ranging from the carbon tax to immigration.

In the recent federal election, that all added up to a giant blue swath washing over Alberta and Saskatchewan, with almost 70 per cent of Albertans voting Conservative.

But would the anger subside if our bellies were full?

"Historically, the sentiment is always strongest when the economy is down," said Solberg. "But it's not just about the economy. It's about when the government does something that interferes with the economy and causes this to happen."

It's a volatile situation that requires deft hands.

Kenney says he's an avowed federalist. A longtime Calgary MP who was at the cabinet table when the current equalization formula was developed under prime minister Stephen Harper, he says he wants to find solutions that help Alberta and calls separation "irrational."

But there is that whole negotiation thing.…

Kenney plans to barrel ahead with a referendum on equalization, which he said will provide leverage when negotiating with Ottawa.

He also said last week that he'll appoint a panel to talk to Albertans — including those with separatist views — about the province's place in the federation.

"There's two approaches that leaders can take in an environment like this in Alberta today," he said about the panel consultations.

"One would be to dismiss and ridicule the sentiment of frustration that is palpable and refuse to listen to those people. That is the worst mistake possible that would just, I think, create even more frustration. The other alternative done is to actually listen to people and respect what they have to say. And I think that is the much wiser approach."

Melanee Thomas, a political scientist at the University of Calgary, doesn't think the premier is doing the province any favours by playing to separatist sentiments. She thinks he's using it to his political advantage.

"Who's the person who's speaking most about western separatism and especially 'if we don't get a fair deal, we're going to have a referendum on equalization, and we should just leave,'" she said.

"This is an elite-driven narrative. I mean, I'm looking at Jason Kenney."

And there is a political advantage to whipping up anger. Angry voters are motivated voters.  Kenney and the UCP arguably rode a wave of anger into office in April, capturing a massive majority government over the incumbent NDP.

"I don't think that people in Western Canada want to separate," Lougheed told CBC News in October 1980. "They want to be a part of the mainstream of Canadian life."

But Lougheed said Albertans had "a great deal to complain about, and they're justified complaints."

Solberg points to Preston Manning and his Reform Party as an example of channeling western rage into something constructive for Alberta.

"It can be used, you know, to to get things for the province and get a fair shake and consideration, but it does have to be handled with care," he said.

"You know, if there was sort of an articulate spokesperson for western separation or for Alberta separation, it would be that much more tricky to handle."

So far, that articulate voice, or real support behind any kind of separatist movement, hasn't materialized.

"I believe the first step is to hold a referendum and let the people themselves decide once they know all of the ramifications. There's lots of reasons to be afraid of this as there is to leaving an abusive relationship and seeking a divorce," he said.

"You know it's not unlike that type of situation, but people reach that point where that's the only viable option no matter what the cost is both financial and emotional."

Still, Hill and others like him think despite the "myriad hurdles, challenges and difficulties" involved in separation, it's the only choice.

He also thinks there will be enough support, if the discussion takes place in a meaningful way, for a referendum to pass.

The numbers, so far, don't support his claim.

Just prior to the election, polling firm ThinkHQ conducted a survey on separatist sentiment in Alberta.

It found 23 per cent of Albertans would vote to secede from Canada — a number that dropped to 16 per cent in Edmonton.

That's despite 71 per cent of respondents saying they believe the current federal government has hurt the province.

The poll was conducted online using a random stratified sample of panellists between Oct. 4 and 7. The margin of error for a comparable probability-based random sample of this size is plus or minus 2.8 percentage points, 19 times out of 20.

In many ways, that anger is manifesting in online memes and angry Twitter tirades, but the real test of a movement's strength is whether it can transform that online push into real-life action (or prove the proponents are real-life people).

To that end, the Wexit movement is planning to host rallies next month in Red Deer, Edmonton and Calgary. CBC News reached out to Wexit leader Peter Downing but did not hear back.

Hill doesn't think the result would be the same after Trudeau's re-election, and ThinkHQ warned another Trudeau victory could exacerbate feelings of alienation.

But pollster Janet Brown, who was not involved with ThinkHQs poll, thinks the separatist sentiment is overplayed.

"Well, I think the frustration is real and the sense of alienation is real. I don't know that there's too many Albertans who really are looking at separatism as a real sort of tangible sensible idea," she said.

"But I think when people talk about separation, it's not because they actually want to separate, it's just an expression of frustration."

Some muse that Alberta should follow the same path as Quebec, stoking nationalism and watching threats of separatism ebb and flow in order to get more out of Confederation, but there's no guarantee that works or can be contained.

Where do we go from here?

The dust is still settling from a bellicose federal campaign that saw Kenney stumping for the losing Conservatives.

Regional wounds are real, particularly in Quebec with its resurgent Bloc Quebecois, in Alberta and in Saskatchewan.

There's still a Trudeau in office, which for people like Hill is a problem in and of itself. And despite the highest wages in the country and a healthy GDP, Alberta still feels left behind and unable to get its main product to market. 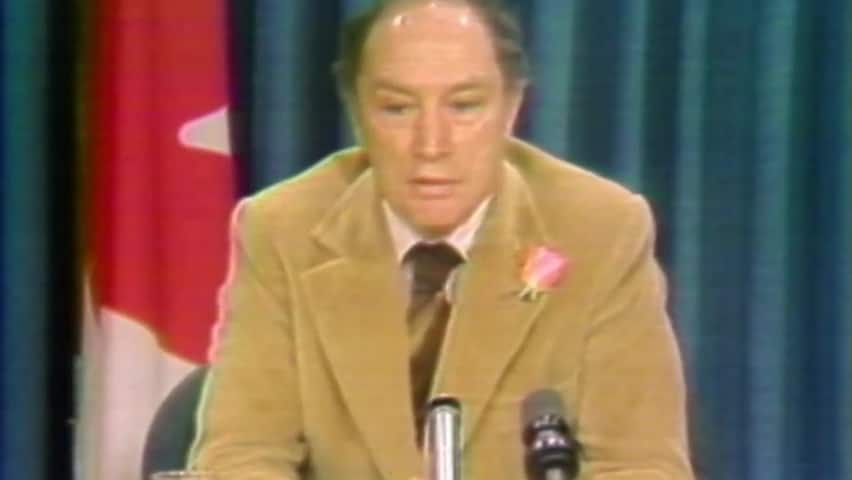 'Maybe the westerners... should get into governments in Ottawa'

40 years agoVideo
1:26
Prime Minister Trudeau says that rather then thinking of separating, Alberta should find a way to demand more from the federal government. 1:26

Proportional representation would even out some of the regional voting blocks, but that's not on the table since Trudeau trampled on the promise of electoral reform after his first election win in 2015.

In a recent column for CBC News, he noted a recent Environics poll found 71 per cent of Albertans feel the province is not treated with the respect it deserves in Canada.

And at least there are conversations taking place.

"The good news is that … there was sort of an opening between the feds and the provincial government," said Solberg.

"And maybe an openness to work together to try and address some of the economic problems that Albertans are concerned about."

It won't be enough to quell feelings of western alienation. Short of a massive transfer of population out of Ontario and into Alberta, it's hard to see what would. Senate reform, maybe?

Western rage seems embedded in Confederation, but the caution is it's now tinged with a contemporary, digitally amplified populism.

"And you just have to look at what's happening in Britain right now with Brexit. You know, people who don't take this Wexit thing seriously do so at their peril. I'm not saying we're going down the road of Britain, but you just can't count on the idea that people are going to back away from this idea just because it doesn't make sense to the premier."