The RCMP's commanding officer in Alberta denies there is systemic racism in policing in Canada, amid allegations his members used excessive force against an Indigenous chief during an arrest.

The RCMP's commanding officer in Alberta denies there is systemic racism in policing in Canada, amid allegations his members used excessive force against an Indigenous chief during an arrest.

Over the weekend, Chief Adam alleged that he was beaten by RCMP officers and his wife was manhandled back in March when police stopped him for an expired licence plate in Fort McMurray. That arrest is now under review.

Nwofor said she has personally experienced two traumatic incidents of racism by police in Alberta and has heard many accounts from Black, Indigenous and other people of colour about racism during contact with police. 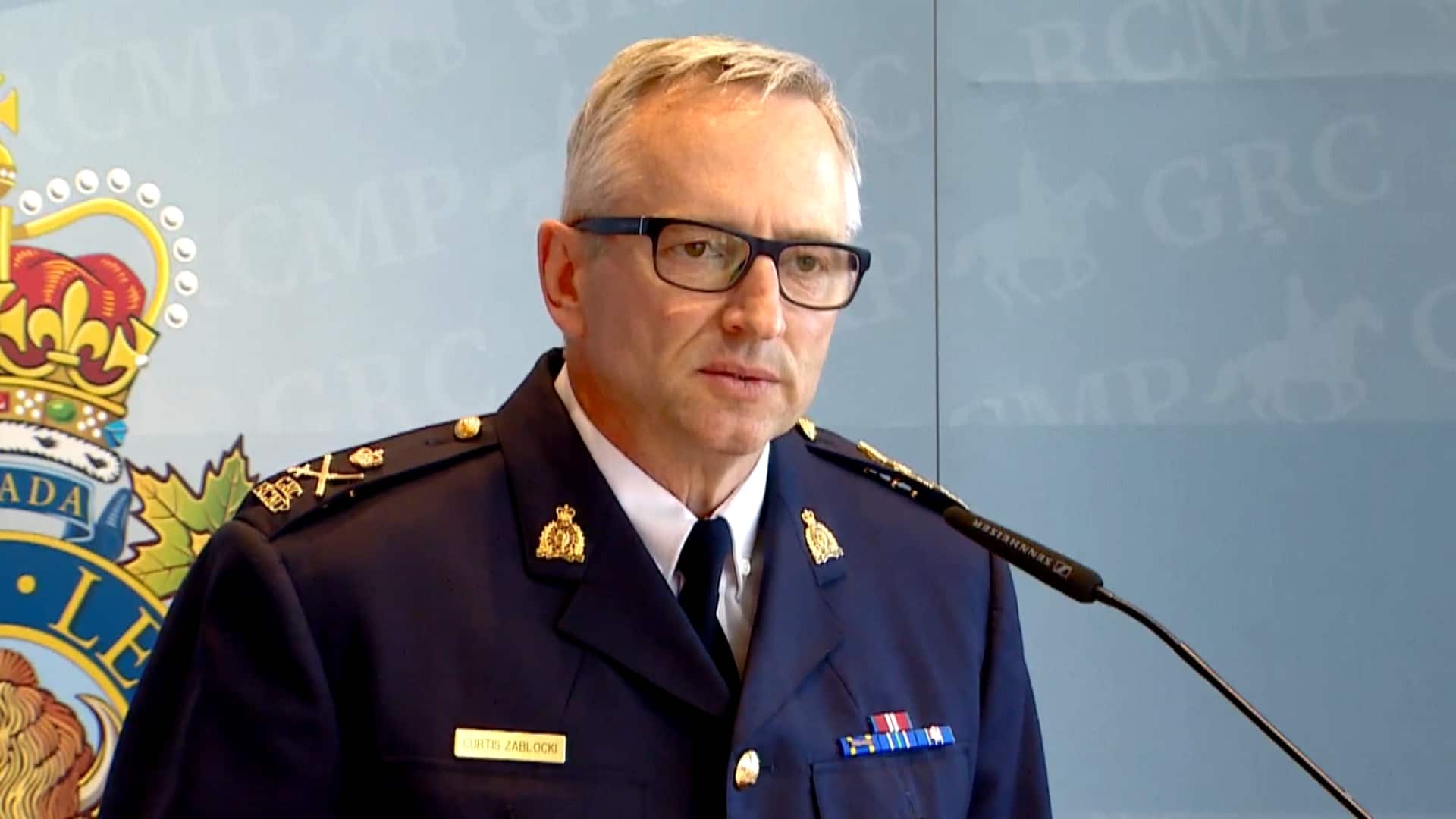 9 months ago
0:47
The RCMP's deputy commissioner in Alberta denies there is systemic racism in policing in the province and in the rest of Canada. Deputy Commissioner Curtis Zablocki's comments came just a day after Alberta's Serious Incident Response Team announced it would investigate claims of racism and police brutality brought forward by Athabasca Chipewyan Chief Allan Adam. 0:47

When contacted by CBC News about his comments, Zablocki issued a statement saying: "We all acknowledge that racist individuals can be anywhere throughout our society and institutions — and we have acknowledged that organizationally in the RCMP."

Zablocki added it is the duty of police organizations to "keep listening, learning and working with the citizens we serve — and we are committed to continuing to challenge ourselves to deliver police services in a way that best meets the expectations of Albertans."

But he did not change his initial statement.

"I feel issues of racism and relationships with our diverse communities in Canada differ from our U.S. counterparts," his statement added.

Zablocki's messaging appeared to contradict the policy of Public Safety Canada, which oversees the RCMP.

As well, Intergovernmental Affairs Minister Chrystia Freeland was asked Wednesday about Zablocki's suitability for the RCMP job in Alberta. She replied by reiterating the views of both Prime MInister Justin Trudeau and Public Safety Minister Bill Blair that systemic racism exists and it must be dealt with.

Trudeau and Blair have both spoken with RCMP Commissioner Brenda Lucki about systemic racism, Freeland said.

"It is very important for all federal government institutions, including the police, to operate from an understanding that systemic racism is a problem for us here in Canada, to not be complacent about that, and we have to work together against it," she said.

Lucki said Wednesday that she has since spoken to Zablocki and said he misinterpreted the term "systemic racism."

"His intention was to simply say that, you know, if there is racism, he didn't believe it in his thoughts that it was rampant across the organization," she said.

When asked if there is systemic racism in policing in Canada, Lucki said she believes there is "unconscious bias."

In response to the incident involving Adam, Blair said Indigenous people and communities "still face systemic barriers in Canada, and the racism they face often takes form in interactions with law enforcement."

"Discrimination on the basis of race or any other form of bias is not only abhorrent and not acceptable, it's unlawful," the minister said.

Before coming to Alberta, Zablocki worked with the RCMP in Saskatchewan in the time period after 22-year-old Colten Boushie was shot and killed on the farm of Gerald Stanley.

"Zablocki speaks about listening and learning. Yet he doesn't seem to be doing either," Sunchild said. "If he was listening to the voices of the Indigenous people, of the leaders, of the advocates, he would have learned about systemic racism in the justice system."

Sunchild said she wasn't shocked to hear the comments, saying similar arguments have been made for hundreds of years.

"We've been hearing this … since colonization, since the RCMP came onto our lands to take the children away," Sunchild said. "It's been the same old problem."

"It's very troubling. This is someone who, in his role, would be one of the people who would be leading the efforts to combat systemic racism within the force," Notley told CBC Calgary News at 6. "So if there's a thought that it's not an issue, then clearly the work we assume ought to be going on is, at the very least, not a priority."

Notley said she hoped the deputy commissioner would make a "very authentic and genuine apology" with a clear commitment of combating racism within Alberta police forces.

"I think, if one message that has come through loud and clear, certainly to me and to many folks, we need to begin by listening," she said. "We need to provide a forum for the people themselves who feel this sense of unease, or people who have been victims."

'Many types' of oppression

Nwofor said denying systemic racism is simply an obstacle to changing it.

"There are many types of systemic oppression that are happening in Canada and Alberta's police forces," she said. "To deny it means you want to silence it."

This is not the first time Zablocki has made headlines for comments about race and policing.

In 2017, while deputy commissioner in Saskatchewan, he denied that relationships between police and Indigenous communities in Saskatchewan were "deeply fractured" after a Human Rights Watch Canada report found evidence to the contrary.

ASIRT investigates cases of serious injury or death that may have been caused by police, and "serious or sensitive" allegations of police misconduct.

With files from CBC Calgary News at 6 and Alicia Bridges