Alberta is now collecting data on the racial and ethnic background of people diagnosed with COVID-19 but says it won't release the data publicly, at least not yet.

Alberta Health is now collecting data on the racial and ethnic background of people diagnosed with COVID-19 but says the data is not yet ready for public release because it's not complete.

A snippet of the data was put out by the premier's issues manager Monday, in defence of the premier's comments about high caseloads in the South Asian community.

"Albertans of South & East Asian descent account for just under 20 per cent of COVID-19 cases, but represent only 11 per cent of the population," Matt Wolf posted on Twitter.

The tweet was one of several Wolf posted in response to what he described as misplaced outrage from some of Premier Jason Kenney's critics over Kenney's recent comments about high caseloads in northeast Calgary, where many immigrants live.

"Some are arguing that the premier is 'blaming' or 'stigmatizing' Albertans by trying to raise awareness amongst cultural communities about how to slow the spread," Wolf tweeted.

"No, the premier is not 'blaming' any groups of Albertans. COVID-19 affects all elements of our society. But data does show that some cultural communities are disproportionately affected."

That data is only currently available to Wolf and other members of the provincial government, however.

CBC News asked the province last week for the data, after the premier said on RedFM radio that "we are seeing a very high level of spread in the South Asian community."

In response, Alberta Health provided a written statement saying the information is being collected but is not yet being published.

"To date, we have not been publicly reporting on the race, ethnicity or socio-economic status of Albertans with COVID-19, focusing instead on risk factors and case-specific data by age and location," the statement said.

It went on to say that Alberta Health "may revisit this in the future when it's feasible." 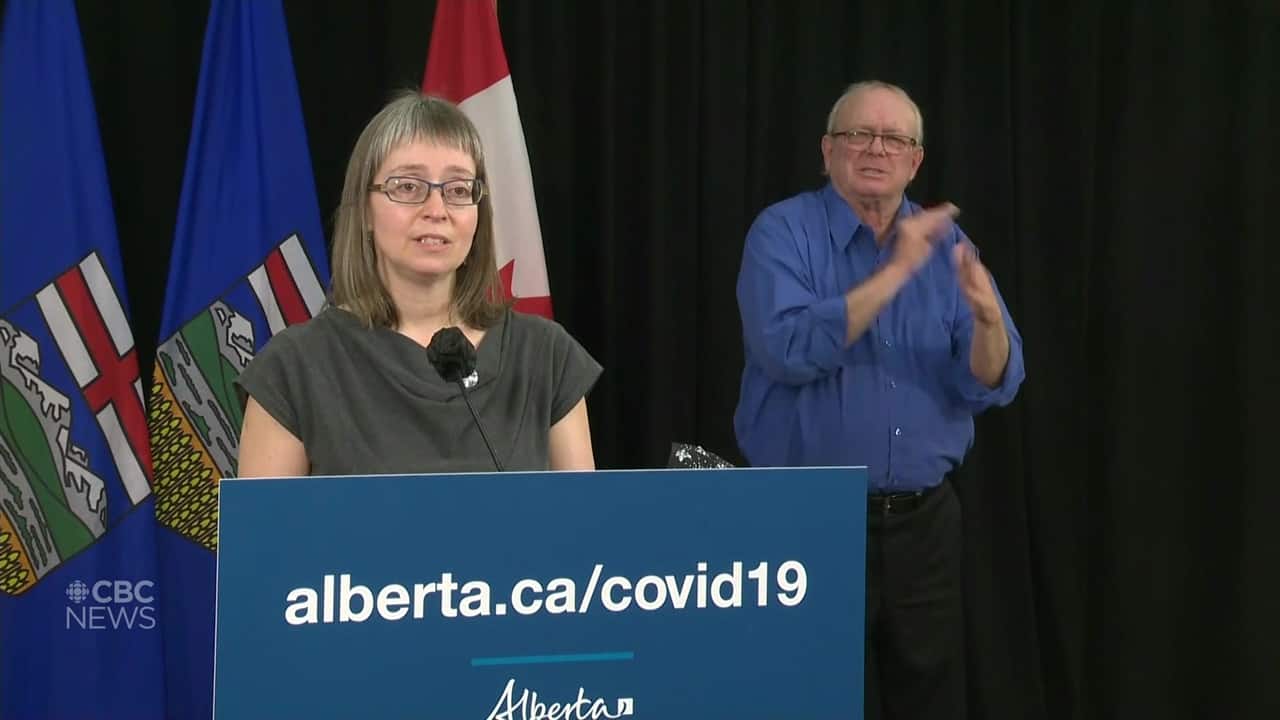 Dr. Hinshaw says Alberta data on racial/ethnic background of people diagnosed with COVID-19 'not complete at this time'

"We have been working over the past several months on putting that data together and doing some analysis so that we would be able to communicate it as a comprehensive whole, with complete analysis," Hinshaw said.

"That's not complete at this time."

Dr. Hakique Virani, a clinical associate professor of public health with the Faculty of Medicine at the University of Alberta, said he was glad to learn the province is now collecting this data but he believes it should be shared publicly, in its entirety, not in snippets.

COVID-19 cases and hospitalizations continue to hit new highs daily, and Virani believes Albertans' trust in the pandemic response has already been undermined for a variety of reasons.

He says it doesn't help when the public is told data exists but isn't ready to be published, only for select parts of the data to then be released on social media.

"When you're hearing two different messages from within the same government, it becomes even more of a challenge," Virani said.

"So we need less confusion and more transparency. And this doesn't serve either of those purposes."

Virani said there is value in collecting this type of data, which has many potential applications.

"It's not just of interest to researchers, but it's interesting to public health practitioners," he said.

"To have local data about certain at-risk groups is invaluable to mounting a sensible response."

In Toronto, demographic data like this was collected early in pandemic, and it showed minority groups were over-represented in reported cases of COVID-19.

Human rights advocates, anti-racism groups, researchers and social agencies have been calling for months for similar data to be collected and shared publicly in Alberta.

"It could lead to a change in health care," Linda McKay-Panos with the Alberta Civil Liberties Research Centre told CBC News in August.

"We need to know what's going on in order to more effectively treat it."

There have been similar calls in Quebec and British Columbia for more of this type of data to be gathered and released.

In the United States, data on race and ethnicity is more routinely collected alongside health data.

In that country, Black people, Indigenous people and Hispanic people are dying of COVID-19 at higher rates than white and Asian people, according to the COVID Tracking Project. There are multiple, overlapping and complex reasons for this, according to researchers who have studied the topic.

The reasons for the high rates among Calgarians of South Asian descent are also complex, Kenney said Monday.

Speaking to former Wildrose leader and Progressive Conservative MLA Danielle Smith, who now hosts a radio show on NewsTalk 770, the premier said there are a wide range of factors related to the rapid spread of COVID-19 among Albertans of particular international backgrounds.

"And some folks, especially refugees who didn't have the benefit of formal education, may even have limited literacy in their own maternal tongue, which means our efforts to translate materials, for example, uncovered that guidelines don't necessarily have the same impact that they might in the broader population," Kenney said.

He said the province is looking at ways to do more "on the ground" outreach to better communicate the latest public health advice to people in situations like that, in addition to supports for people who test positive for COVID-19 but cannot effectively self-isolate due to their living situation at home.

"These are great, hardworking people and we need to to help them," Kenney said.

"So I've asked our team to come up with a much, much bigger package of free hotel isolation where the province will cover the bills."

"This is not at all about blame," the premier added.

"It is about reaching out."

Coun. George Chahal, who represents Ward 5 in northeast Calgary, believes one of the biggest factors at play in this part of the city is the type of work that many people do.

He said it's especially common for people in his ward to have jobs that put them at increased risk, such as working in meat-packing plants, driving taxis, buses or ride-sharing vehicles like Uber, working in hospitals or nursing homes, and working in retail or grocery stores.

"Most of these residents don't have a choice to work from home," Chahal said Monday, in an interview on The Calgary Eyeopener. "We also see in northeast Calgary, there are some of the highest rates of public-transit use — pre-pandemic and during the pandemic," Chahal added.

"So I think this is an important factor, as well."

That will take some time, she said, as the data is gathered via contact tracers and there have been significant backlogs in that system — and gaps in data collection, as a result.

"We will not have reliable ethnicity data for the month of November," Hinshaw said.

"It's really important to remember that single numbers that are released should never be used to stigmatize particular communities," she added.

"There are many reasons why individuals who self-identified within a particular ethnic group may be over-represented and that could have more to do with occupation or with other factors in those individuals' lives, and absolutely should not be taken to infer any kind of blame or stigma on particular individuals."

With files from Raffy Boudjikanian