Alberta prairie falcon population half what it should be, says veteran conservationist

When you're handling baby falcons, it's best to make sure they're the right age. "If you get them too old, they get too aggressive, and they end up shredding you," John Campbell says. 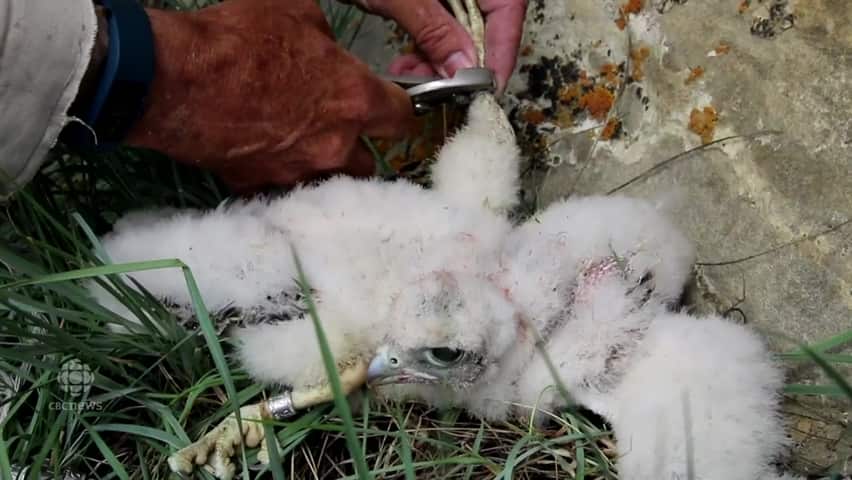 Prairie falcon population half of what it should be

When you're handling baby falcons, it's best to make sure they're the right age.

"If you get them too old, they get too aggressive, and they end up shredding you," John Campbell says, chuckling. "I've got lots of marks and scars on my hands from that. And of course if they get really old, then you've got a risk of them jumping out of the nest and you don't want that."

The Calgarian has been working with falcons for more than 30 years.

Every spring, he packs up his boots, a rope, and dozens of tiny metal bands, then heads out in search of prairie falcon nests.

His goal is to find chicks, scoop them out of the nest and then wrap the bands around their legs.

The idea behind "bird banding," as it's called, is to help researchers track birds after they leave the nest. If a band is found on the ground, or if one of the birds is captured as an adult, the researcher will know where it came from, and how old it is. All that information is inscribed into the metal bands, along with instructions to turn them in to the province if found.

Banding prairie falcons is no easy task. The birds nest high up on cliffs.

First, Campbell scouts the nests with binoculars to see if they're occupied. Then he'll visit the nests to check on the chicks. Sometimes he climbs up to their perch, other times he rappels down on a rope.

Campbell admits that working in the vertical world of the prairie falcon has its challenges.

"I have taken some tumbles. And people do say that I'm nuts. You know, 'close your eyes' or 'he's a mountain goat' or 'crazy,' " he laughs.

"I've been doing it for a long time and I'm still here, so I think I know what my capabilities are."

Campbell sometimes works alone, and other times with a team of volunteers. Over the years, he's banded more than 10,000 birds.

Campbell monitors about 50 nesting sites across southern Alberta. He visits them every year.

And he says that right now, things aren't going so well for the prairie falcon.

It's currently listed as a "sensitive" species by the Alberta government. But Campbell thinks the bird might soon be reclassified to a more serious category. He estimates its population is about 50 per cent of what it should be.

"We're just encroaching on and taking that territory that birds and wildlife in general need to survive in," he says. "And that has ... a negative impact, unfortunately."

Campbell's dedication to the prairie falcon population was recognized by the province in 2015, when he received the Order of the Bighorn Award.

The award is given to volunteers who have made an important contribution to wildlife conservation in Alberta.

But Campbell says he does it because it's fun. He's been working with birds since he was a boy. His father, John Campbell Sr., was one of the first people to breed peregrine falcons in captivity to help boost the population.

Today, descendants of the Campbell family peregrines can be found across Western Canada.

Campbell adds that, ultimately, it's about keeping the prairie falcon population healthy.

"We don't want to lose these birds," he says.

Caroline Wager is a freelance writer and former associate producer with CBC Calgary. She has a Bachelor of Journalism from the University of King’s College, and has also worked as a videographer with CTV Halifax and Citytv Calgary.