Alberta dog reunited with family after turning up in Manitoba — 1,100 kilometres away

With the family dog missing for a month, Jim Third was preparing to tell his kids their beloved Vader was, almost certainly, never coming home — until he got a phone call from another province.

With the family dog missing for a month, Jim Third had prepared "the speech" for his kids.

Down to the finest detail, the Brooks, Alta., resident had planned out how to tell his nine-year-old daughter and 14-year-old son their beloved Vader was, almost certainly, never coming home.

"I was going to do the speech during my supper preparations, while I cut onions," he said.

"And if I bawled like a baby, I could blame the onions."

After weeks of searching — first, alongside the ditches of the Trans-Canada Highway where the dog went missing, then on various lost-pet Facebook groups across the prairies — no credible sign of Vader had turned up.

There were a few false leads, a few faded hopes, but nothing solid to hold on to.

Until suddenly, there was.

A dog had been spotted that looked just like Vader — at least, much more so than the previous leads — and when he looked at the picture, he was 90-per-cent sure it was his dog, he said.

The only thing was: This dog was in Steinbach, Man.

But how Vader wound up two provinces to the east and some 1,100 kilometres away, as the crow flies, was a secondary concern.

The biggest issue was getting him home.

First, there was the matter of convincing animal control officers in Manitoba that Vader was, indeed, the Thirds' dog.

As luck would would have it, Vader had run off (likely in pursuit of a rabbit or other small creature) shortly after being bathed, and his collar was on a rack, drying, rather than around his neck at the time.

But a description of the spot pattern on Vader's tongue and his distinct ears (one up, one down) was enough to confirm to officials that the dog belonged to the Alberta family.

A friendly Manitoban also agreed to house Vader, free of charge, until transportation could be arranged to bring him home.

That's where Maggie Rae came in.

The long-distance trucker is part of a network of animal-loving Canadians who call their volunteer-run group "Furry Hobos 'n' Hiway Heroes" and transport dogs around Canada and the United States for free.

It's a way for animal shelters to move pets between them and to connect them with would-be adoptive families in remote parts of the country, said Margaret Foster-Hyde, the group's co-ordinator.

She said there are about 20 truckers volunteering and the group has transported about 400 pets over the past four years.

"We're all dog-friendly people and the dogs ride in the cab with us," Rae explained. "It's lovely having the company."

In this case, Rae was preparing to take a load of cattle from Winnipeg (near Steinbach) to Lethbridge (near Brooks) and agreed to bring Vader along for the ride.

After the long trip across the prairies, she met up with the Thirds in Alberta to return their long-lost pet, and even broadcast the tail-wagging reunion on Facebook Live. 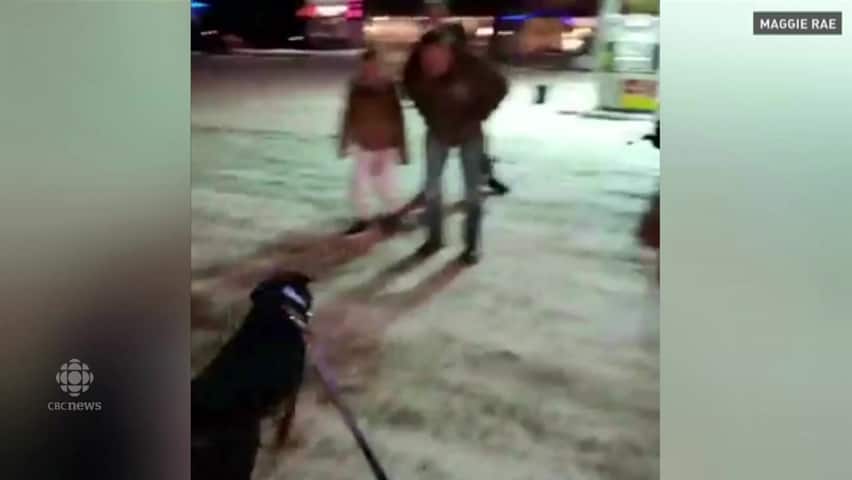 Watch Vader reunite with his family in Alberta

3 years agoVideo
0:40
Vader had been missing for a month before a team of online sleuths and truckers helped bring him home 0:40

"It was like opening the best Christmas present we ever had," Third recalled of that moment.

"It was fantastic to see the smiles on the kids' faces as soon as that truck rolled up."

Third said the reunion wouldn't have been possible without a team of determined animal lovers who shared and reshared his missing-dog posts across the worldwide web.

He said a Saskatchewan resident he came to know named Sheryl Renton was instrumental in getting the word out and helping him navigate the new-to-him world of Facebook groups and internet forums.

While Third was uncertain at first, Renton had little doubt the online community would come through for Vader.

She shared photos of Vader to about 30 missing-pet sites in Alberta in addition to several in Saskatchewan, but it wasn't until she expanded the search to Manitoba, that things really started clicking.

"As soon as I posted him on those four or five sites in Manitoba ... all of a sudden I'm sitting at my computer and (a photo of) Vader popped up, right beside a tree," she said.

Sure enough, it turned out to be Vader that was spotted lying beneath that tree in Steinbach.

Renton figures someone picked up Vader along the Trans-Canada Highway in Alberta and took him to Manitoba, but then got spooked when "stolen dog" posts started popping up in the province and decided to let the pet go.

She noted Vader was in good health and didn't appear to have travelled long distances on foot when he was picked up by animal control officers in Manitoba.

And while the exact nature of Vader's month-long adventure away from home may never be known, Third said he appeared no worse for the wear.

"Oh man, he's acting like nothing happened," he said.

"The next morning, he just took right back to his old mannerisms."