Indigenous Albertans say they were disappointed but not surprised when they heard about an Alberta Health Services employee who referred to a Kainai Board of Education principal using a racial slur. 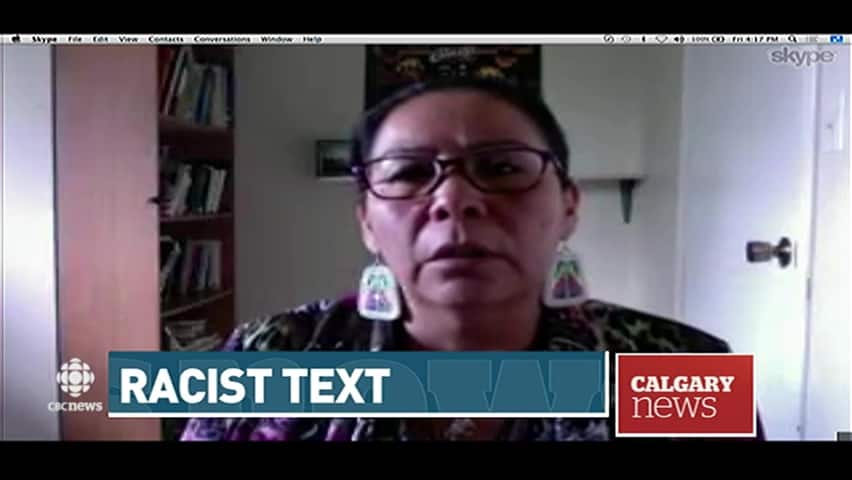 Indigenous Albertans say they were disappointed but not surprised when they heard about an Alberta Health Services employee who referred to a Kainai Board of Education principal using a racial slur.

"It was very disappointing, especially considering it was a [provincial] employee," said Deserae Yellow Horn of the Piikani First Nation.

"This really just continues to strain that relationship between the First Nations and the Alberta Government, to know there is this level of ignorance still there."

Michelle Robinson, who comes from a Slavey Dene background, was saddened by the news but said it was consistent with what she and her friends have experienced directly — both in society at large and within Alberta's health-care system, in particular.

"I wasn't that surprised, to be frank, because a lot of racist terms are thrown around on a regular basis, still," she said.

"One of the terms that was being used against this woman, that's still being said to a lot of women."

The word in question was "squaw," according to Ramona Big Head, the principal of Tatsikiisaapo'p Middle School in Stand Off, Alta., who was the target of the slur.

The text message described how someone had been "yelled at" by Big Head during a training event on the Kainai First Nation, also known as the Blood Tribe First Nation, located about 200 kilometres south of Calgary.

The message appeared intended for another AHS employee but was mistakenly directed to someone who also works at the Kainai Board of Education.

"Think of that image for a second," Big Head said of the slur, which was preceded by the word "rabid."

"This description brings to mind an animal, such as a dog, frothing at the mouth, dangerous, vicious, mad, who ultimately needs to be put down."

'These words are weapons'

CBC News avoided repeating the slur in its initial coverage on Thursday while other public discussion of the slur referred to it as "the S-word."

But both Robinson and Yellow Horn said that led to some confusion as to which word, in particular, was used, as there is another derogatory "S-word" that is often used against Indigenous people: "savage."

"These are words that have been constantly used against us," Yellow Horn said.

"These words are weapons and they are used against people to belittle them and really bring us, as First Nations, down. It's really horrible."

Beatrice Machiskinic said she tries to not pay attention to racial slurs when she hears them in public or in casual settings, but it's a different story when someone in the public health care system directs it toward someone in the education system.

"It's kind of sad to see people in power be able to do that to others," she said.

Alberta Health Minister Sarah Hoffman said the AHS employee has been suspended and there will be further consequences for her.

"Alberta Health Services as well as our government take this very seriously," she said.

"Anyone who's engaged in the public service obviously has a responsibility to treat everyone with respect and the comments — that were very racist and very disrespectful — did not honour that responsibility."

For her part, Big Head said she hoped AHS would take a "strong stand" but she did not call for the employee to be fired.

"I'm not out to get her or get anybody," she said.

"It's not about a witch hunt or anything like that. It's about making sure that everyone else learns from this."

Big Head said she actually thinks the attention the whole episode is receiving could help "expedite" the reconciliation process between Indigenous and non-Indigenous people by exposing racism that still exists, often below the surface.

"It's bringing it to light and people are realizing it hasn't gone away," she said.

History and context of the 'S-word'

The particular slur that was used in the text message has a long and complicated history, said Darin Flynn, a University of Calgary linguistics professor who specializes in Indigenous languages.

While there have been efforts by Indigenous people to "reclaim" the word, he said it's not comparable to what's happened with the "N-word" in North America.

"With this S-word, let's call it, it's really different," he said.

"It's actually, very strangely, used more by whites than by Indigenous people. That's what's baffling about it."

Etymologically, Flynn said the word dates back at least 400 years, and, among people who spoke the Massachuset language in what is now New England, it meant "woman."

But he said people who defend the current use of the word by citing its history are missing the point.

"That argument that the origin of the word diminishes its offensiveness is a non-sequitur for linguists," he said.

"It doesn't matter where a word comes from. It's subjective use. It's the word in context. It's the connotations of the word that are hugely more important."

With files from Kate Adach and Terri Trembath