Schools in Alberta are no longer required to maintain two metres for physical distancing in classrooms, following a directive by Alberta's chief medical officer of health.

Schools in Alberta are no longer required to maintain two metres for physical distancing in classrooms, following a directive by Alberta's chief medical officer of health.

The new order essentially brings the regulations into line with the reality on the ground and follows previous direction from Dr. Deena Hinshaw.

On Aug. 4, Hinshaw brought in mandatory masking for students from Grade 4 to 12 where distancing cannot be maintained.

The new order, signed on Aug. 29,  says "an operator of a school does not need to ensure that students, staff members and visitors are able to maintain a minimum two metres distance from every other person when a student, staff member or visitor is seated at desk or table."

It says this applies within classrooms where tables and chairs are arranged to prevent people from facing each other and allowing the greatest distance possible between seated individuals.

The order was met with indignation on Twitter by Jason Schilling, the president of the Alberta Teachers' Association.

He said he was "stunned by this reversal of physical distancing in classrooms."

Schilling pointed to guidance from the Strategic Advisory Council for the chief medical officer of health and said it recommends distancing in classrooms, but even that recommendation acknowledges distance is not always possible and isn't an "all or nothing proposition."

The chairs of both the Calgary Board of Education and Edmonton Public Schools told Alberta at Noon the order changes nothing in their classrooms.

"The reality is, given our size and our lack of space and our growing enrolment in Edmonton Public Schools, physical distancing was never on the table anyways," said Trisha Estabrooks with Edmonton Public.

Marylin Dennis with the CBE said much the same.

"Physically distancing in the way that we commonly talk about it has never been possible in Calgary classrooms and still isn't," she said, adding distance is just one of several strategies being used to reduce the threat of infection in schools.

Hinshaw took to Twitter on Monday morning to respond to criticism of the order and the fact it was posted on a weekend.

I’ve heard criticism that Order 33-2020 was issued over the weekend. This timing was not to hide information from Albertans but to ensure school authorities knew about the order before it came into effect today (August 31). (1/8) <a href="https://t.co/ZZG0Kwkdx2">https://t.co/ZZG0Kwkdx2</a>

She said the intent was not to hide the order from Albertans and that she would commit to posting all future orders between Monday and Thursday and will share those orders on social media.

Hinshaw also said the new order does not change anything and is consistent with her direction stemming from the Aug. 4 mandatory mask announcement. 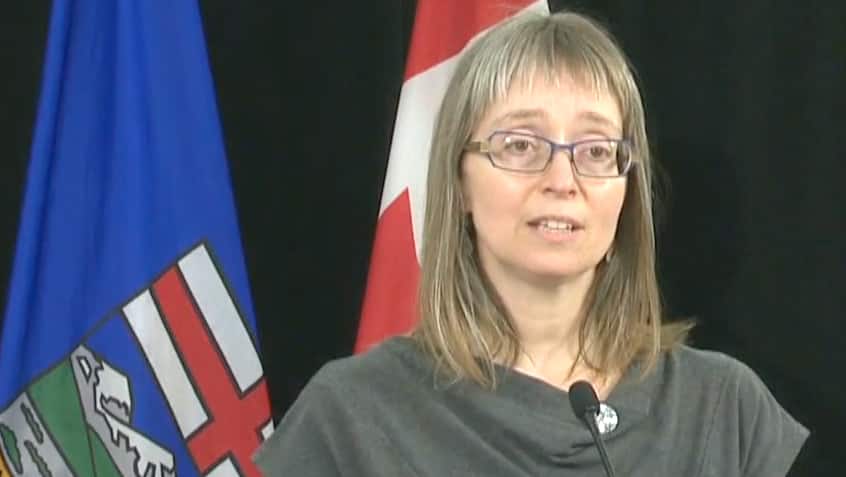 2 months ago
4:30
Alberta's chief medical officer of health says an order issued days before students head back to school was meant to be transparent and not to hide information. 4:30
CBC's Journalistic Standards and Practices|About CBC News