What you need to know about COVID-19 in Alberta on Friday, Nov. 13

Alberta has restricted recreational sports, shut down amateur performances and will close pubs and lounges earlier for a period of two weeks in an effort to curtail the spread of COVID-19 in the province.

For the next two weeks, a swathe of Alberta will suspend indoor group fitness programs, team sports and group performance activities. All restaurants, bars, lounges and pubs in Calgary and Edmonton and other areas under enhanced status (areas with more than 50 active cases per 100,000 people) must stop liquor sales by 10 p.m.

Alberta Premier Jason Kenney also urged Albertans in any area under enhanced measures to not to have social gatherings in their homes.

The new measures were announced on Thursday. On Friday, the province reported 907 new cases and 8,593 active cases — another record high.

The measures were released the same day a letter signed by more than 430 physicians called on Kenney to implement a "circuit-breaker" targeted lockdown, on the heels of a similar call made by dozens of doctors earlier this week.

"There is no more time. We have to act now," said Dr. Tehseen Ladha, who co-authored the latest letter. "We need something strong and mandatory in order to bend the curve." 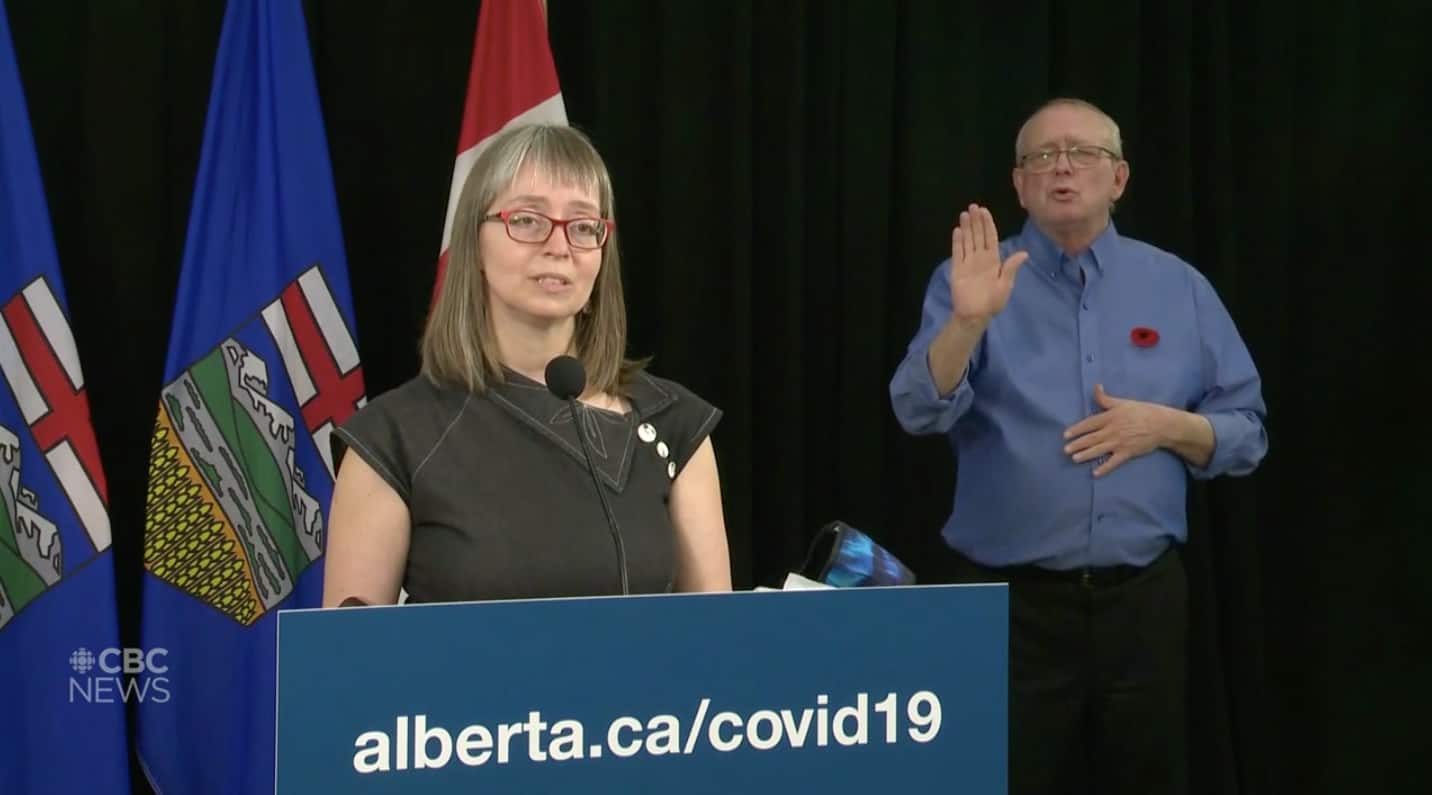 Albertans who test positive for COVID-19 can now access an online contact tracing tool to list the names and phone numbers of close contacts so that they can be notified about potential exposure with an automated text message.

The tool has been announced after cases became so high that AHS announced it would be hiring more contact tracers and no longer notify people who have been found to be in close contact to an infected person unless they are deemed to be linked to a "high-priority setting."

Hospitals in Calgary are preparing for an influx of patients in the coming days and weeks. Dr. Peter Jamieson, the medical director at Foothills hospital, says the city's ICUs are operating at over 80 per cent capacity. If necessary, COVID-19 patients could be sent to a temporary tent facility at the Peter Lougheed hospital or to the Alberta Children's Hospital. 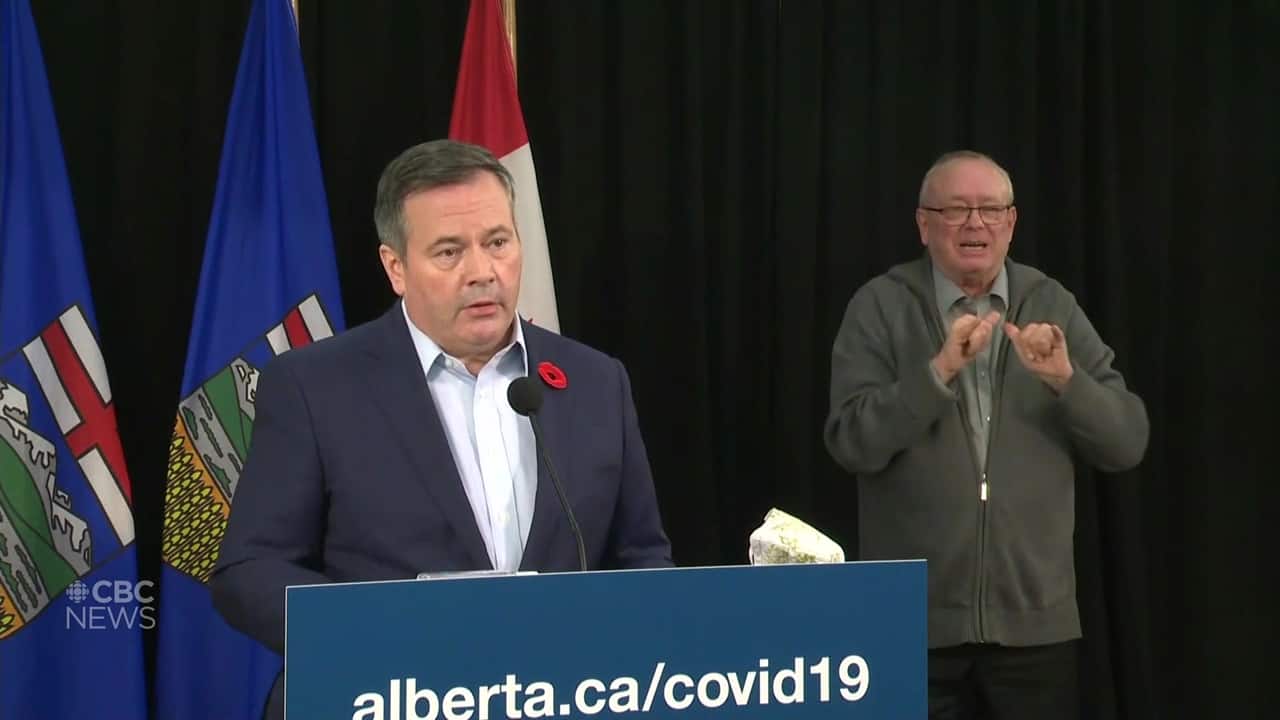 2 months agoVideo
2:42
Premier Jason Kenney is calling on Albertans to not host parties or large family dinners and is expanding the 15-person limit on social gatherings to all communities on the province’s COVID-19 watch list. 2:42

Maintaining appropriate staffing levels in Edmonton hospitals has also been a challenge as COVID-19 cases continue to climb, and some doctors warn that staff are burning out.

The premier has warned that AHS may need to cancel elective surgeries, as it did in the spring, to make more room for potential COVID patients, should case numbers continue to escalate.

The reopening of schools has been highlighted as a potential driver of recent surges in other parts of Canada and around the world, but Dr. Deena Hinshaw, the province's chief medical officer of health, doesn't believe they are causing the high rate of new cases in this province.

Outbreaks at two shelters have left Calgary's homeless terrified to come in out of the cold for fear of catching COVID-19, says a group that helps people living on the streets. Be The Change YYC provides food, water, blankets, hygiene supplies, tents and tarps three nights a week in the city's downtown.

Here is the regional breakdown of active cases reported on Friday.

As of 10 a.m. on Friday, provinces and territories in Canada had reported a cumulative total of 282,582 confirmed or presumptive coronavirus cases. Provinces and territories listed 226,775 cases as recovered or resolved. A CBC News tally of deaths based on provincial reports, regional health information and CBC's reporting stood at 10,767.

Ontario could see 6,500 daily new cases of COVID-19 by mid-December if no further action is taken to curb the fast-rising curve, new modelling shows.

Ontario's science advisory table released projections on Thursday that show the pandemic is worsening across the province overall. Long-term care residents' deaths are increasing each week and case numbers are likely to exceed those of European cities currently in some form of lockdown, if case counts continue to grow by five per cent.

Schools and workplaces have the highest rates of transmission, Legault said during his Thursday news briefing. The premier said 1,174 classes are currently shut down due to positive cases, 324 of those in the last two days alone. It is clear, he said, that schools are a vector for the virus in the province.

Manitoba's sharp new code red COVID-19 restrictions kicked in early Thursday as the province tries to slow the spread of the novel coronavirus.

The new rules are taking effect as the province reported a record-tying nine COVID-19 deaths and 474 new cases on Thursday. The province's five-day test positivity rate — a rolling average of the COVID-19 tests that come back positive — is now 11 per cent, another record.

Schools will stay open, but everything from non-essential retail to theatres and restaurant dining rooms will be closed.

In neighbouring Saskatchewan, more restrictions are being introduced today. COVID-19 case numbers have been rising in the province, with 111 new cases reported on Thursday. The latest figures put the number of hospitalizations at 49, with 13 in intensive care.

More than 300 doctors signed a letter calling for the province to do more to fight the novel coronavirus.

"If more is not done to change our course, we are confident that winter will bring overflowing hospitals, cancelled surgeries, overwhelmed health-care providers and needless death," the letter said.

British Columbia on Thursday announced 1,130 new COVID-19 cases over a 48-hour period (the province did not provide an update on Wednesday), as well as four more deaths.

Officials also presented new epidemiological modelling that showed COVID-19 cases in B.C. are doubling every 13 days, with cases intensely focused in the Vancouver Coastal Health and Fraser Health regions over the past two weeks.