Everything you need to know about COVID-19 in Alberta on Thursday, Jan. 21

Alberta's top doctor says it's encouraging to see the positivity rate steadily declining but added it's critical the province maintain enough restrictions to continue to drive COVID-19 numbers down.

Here is the detailed regional breakdown of active cases as of Thursday.

Here are the latest Alberta COVID-19 stories from yesterday and today:

Declining numbers of cases and positive tests for COVID-19 in Alberta show that restrictions put in place last year have been effective, the province's top doctor says.

Alberta reported 21 more COVID-19 deaths on Wednesday and 669 new cases of the illness.

Laboratories conducted about 14,900 tests over the past 24 hours putting the positivity rate at about 4.5 per cent.

"It's very encouraging to see our positivity rate steadily declining since the peak in December," Dr. Deena Hinshaw, the province's chief medical officer of health, said Wednesday at a news conference.

"And I would say that the data that we have indicates that the restrictions put in place in November and December have achieved, so far, their intended outcome."

It's critical that the province maintain enough restrictions to continue to drive those numbers down, Hinshaw said, given the high number of people still being treated in hospitals.

"We need to build on our collective success by going slowly toward allowing some additional activities and not experiencing a rebound if we open too quickly," she said.

An announcement that Canada will not get any Pfizer-BioNTech next week means Alberta will have to change its vaccination rollout plan and concentrate on giving second doses to those who have already been vaccinated, the province's health minister says.

Tyler Shandro said Tuesday he was "extremely concerned" by the news that Pfizer would decrease the amount of COVID-19 vaccine coming to Canada from its factory in Belgium, with no doses expected to arrive next week and further anticipated reductions in the following two weeks.

"With fewer vaccines arriving, we have no choice but to focus on delivering second doses for those who have already been vaccinated," Shandro said in a statement. 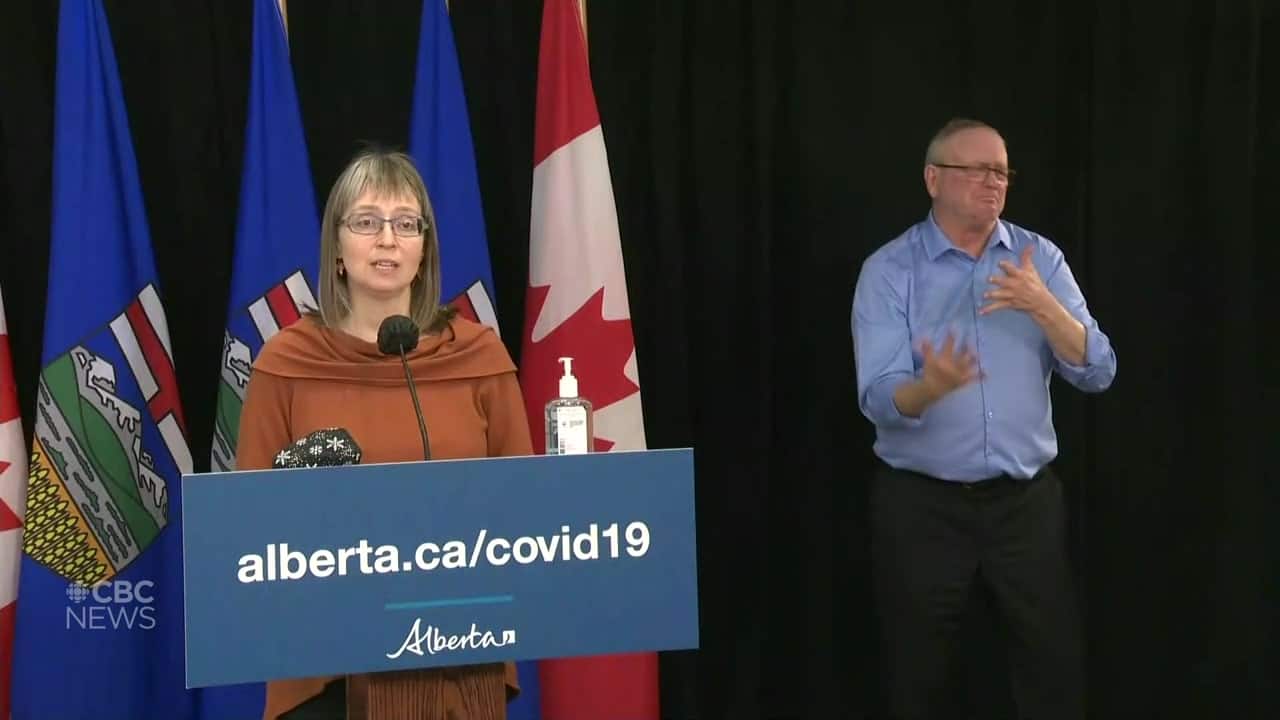 1 month agoVideo
1:27
With uncertainty in the supply of Pfizer’s COVID-19 vaccine, Alberta Health Services is adjusting planning of the rollout and doing everything they can to get second doses to those who have received their first dose, Dr. Deena Hinshaw said Tuesday. 1:27

Vaccine has been reserved to ensure the province can provide second doses to all long-term care and designated supportive living residents, Shandro said.

"At this time, we believe Alberta Health Services will also be able to provide second doses to health-care workers within the established window," he said. "However, some uncertainty exists because it is unknown how much vaccine will be received by Canada in the first two weeks of February."

A new COVID-19 followup clinic — designed to help people struggling with long-term respiratory problems after a diagnosis — is set to open at Calgary's Peter Lougheed Hospital next month.

This is the second clinic of its kind in Calgary and one of just three in Alberta. A similar centre opened in Rockyview General Hospital in September. There is another at the University of Alberta Hospital in Edmonton.

"I know there's going to be a need for these patients," said Dr. Jason Weatherald, a pulmonologist and assistant professor at the University of Calgary who works at the Peter Lougheed Centre in northeast Calgary.

"When I was working on the COVID units in the hospital, I really realized that northeast of Calgary was disproportionately being affected by COVID — in the community but also in terms of the number of hospitalized cases."

Gathering restrictions in Alberta have prompted funeral homes to offer friends and families more options to remember loved ones.

Live streams and video recording of funeral services weren't popular options for grieving families before but some funeral directors say the services may be here to stay.

On Jan. 8, the family of Donna Burkoholder held her funeral service near Tofield, Alta. Due to the COVID-19 restrictions, only 10 people could attend in person.

It made for a tough decision for the family.

"How do you pick which family can come to a family member's funeral? So we didn't have my children or my little brother's children," said Lorne Burkholder, Donna's son. "That's going to be the loneliest moment ever you're going through."

Working with family members, community members, and the funeral home, the family held a service with 10 people beside the casket outside Salem Mennonite Church.

Edmonton International Airport officials are guardedly optimistic about the expansion on Feb. 1 of the COVID-19 international border testing pilot program.

Currently the pilot is only available to eligible international travellers arriving at Calgary International Airport and the Coutts land border crossing.

Those participating in the program entering Canada will have to show proof of a negative test — taken within 72 hours before the flight — before being allowed to board the plane destined for the province.

Once they arrive in Alberta, they will be tested again and must quarantine for 48 hours. If the second test result comes back negative, they can leave quarantine as long as they remain in Alberta for the first 14 days and get a follow-up test a week later.

Currently, both the federal and provincial governments are discouraging unnecessary travel.

The pilot will run until 52,000 people have been tested.

The Calgary International Airport is restricting entry to its terminal building to passengers and people who work there, as part of its efforts to limit the spread of COVID-19.

As of Jan. 18, only passengers with a valid boarding pass and on-duty airport employees will be allowed inside, said Reid Fiest, the airport's manager of media relations.

There are some exceptions, including people who need to travel with a support person, adults accompanying a minor who is travelling alone, hotel guests at the Calgary Airport Marriott and approved accredited media.

A proposed Calgary snow bubble is no longer going forward.

On Wednesday morning, the international governing body for skiing and snowboarding (FIS), in consultation with Freestyle Canada and Canada Snowboard, decided not to continue with plans to host the 2021 world championships proposed for Calgary.

Countless hours had been spent planning and putting forward proposals to host the 2021 freestyle ski, snowboard and freeski world championships, as well as a number of World Cup events, that were going to be held starting Feb. 24 and running until the middle of March.

The events were going to include dozens of athletes from across Canada and around the world — one of the sticking points was having a large number of international athletes coming into the country.

"While we are gutted, the safety and health of our athletes, coaches, volunteers and staff is, and always will be, our top priority. COVID-19 continues to evolve globally, and we believe this decision is in the best interest of our broader sport community at this time," said Peter Judge, chief executive officer of Freestyle Canada.

The announcement comes just a day after two members of Canada's snowboard delegation preparing to compete at an international event in Switzerland tested positive for COVID-19, forcing the entire Canadian men's slopestyle team to miss the event.

Nurses who have to self-isolate due to exposure to COVID-19 will receive special sick leave retroactive to July 6 under an agreement reached with Alberta Health Services this week.

The measure is retroactive to July 6, 2020, the day Alberta Health Services ended the special code nurses could use for COVID-related sick leave. The code allowed them to take time without using up their regular sick days. Under the agreement, nurses forced into quarantine since July 6 can qualify for payments or reinstatement of their regular sick days.

In addition to paid sick leave, AHS is offering one day of paid leave and leave without pay to nurses who need to care for sick family members or children who are at home due to a school or daycare closure.