Everything you need to know about COVID-19 in Alberta on Monday, Dec. 21

Alberta reported 1,240 new cases of COVID-19 on Monday, along with nine additional deaths from the virus, bringing the total number of people in the province who have died of COVID-19 to 860. 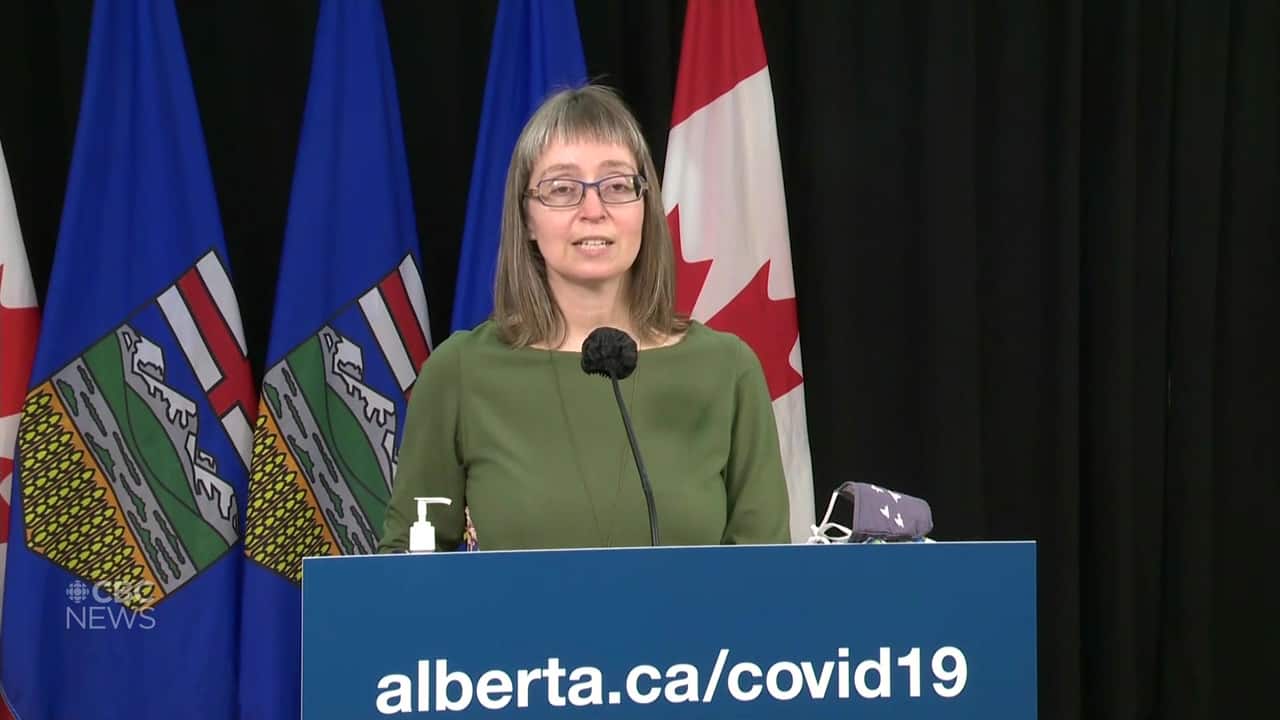 3 months ago
1:54
Alberta's chief medical officer of health Dr. Deena Hinshaw says that the new vaccination against COVID-19 is safe and it works. 1:54

Alberta reported the lowest testing positivity rate it has seen in weeks on Monday, at 6.8 per cent. However, hospitalizations continue to increase with 795 people in hospital, including 151 in intensive care.

The province reported nine more COVID deaths and 1,240 new cases on Monday, bringing the total number of active cases in the province to 19,165.

"This week is another test for our province. This is usually a time for many to relax and celebrate, but we must not relax our guard or gather with friends and family outside our households," she said.

The provincewide R-value, or number of people infected by each person with the virus, was 0.92.

A Calgary judge has rejected an emergency application seeking a stay of Alberta's COVID-19 public health restrictions, including bans on gatherings and mandatory masks.

Lawyers for the group of plaintiffs — including two southern Alberta churches and a Calgary gym owner — had argued the province's COVID-19 restrictions violate their constitutional rights.

In the application, Heights Baptist Church in Medicine Hat and Northside Baptist Church in Calgary, along with three individuals, argued that a number of their constitutional rights have been violated, including limiting peoples' ability to gather for both social and religious reasons, along with travelling and conducting business or expressing themselves.

The Justice Centre accuses the government of "cancelling Christmas" and suggests COVID-19 has not created an emergency beyond the normal scope of illness and death in the province.

Calgary's police chief says there's a time and place to debate the legitimacy of laws and punishments, but not when police are enforcing them.

"I want to be crystal clear. We do not live in a society where a person can pick and choose the laws they follow," Chief Mark Neufeld said Monday.

"Laws become unenforceable if people are free to simply walk away from officers without identifying themselves. There is a time and a place to debate laws and to argue your innocence and that is in the courts. It is not at the roadside. It is not in the park and it is not on the ice."

Neufeld was alluding to an incident caught on video last Thursday that showed officers arresting a 21-year-old man at an outdoor skating rink for allegedly violating a public health order and resisting arrest.

There were also two arrests at an anti-mask, anti-restrictions protest in front of City Hall.

Provincial health orders bar outside gatherings. Those in violation can be hit with tickets that start at $1,000. Calgary's mask bylaw carries fines starting at $100.

Anyone who has been in the United Kingdom in the past 14 days should get tested for COVID-19, whether they're symptomatic or not, the Alberta government said Monday.

The announcement comes after Ottawa joined several European nations by halting flights from the U.K. on Sunday in an effort to prevent a new, potentially more contagious strain of the coronavirus from spreading to this country.

The province also said travellers from the UK who are participating in Alberta's border pilot rapid-test program must immediately quarantine, whether they've had a negative test or not.

Travellers will be contacted directly by Alberta Health Services to book a test.

On Sunday, 1,286 new cases were reported and the province now has 19,20 active cases. There are 760 people in hospital, including 149 in intensive care. The testing positivity rate is 7.2 per cent.

Alberta reported another 10 deaths on Sunday, bringing the total deaths during the pandemic to 851 since March.

In November, the province began to announce whether or not a patient who died of COVID-19 also had any comorbidities, which are pre-existing conditions occurring alongside COVID-19.

Dr. Cynthia Carr, an epidemiologist and founder of EPI Research Inc., says studying comorbidities can contribute to a greater understanding of how conditions impact each other, but that discussing the concept without nuance can lead to a misunderstanding or dismissive attitudes to COVID-19's dangers — something those living with pre-existing conditions say contributes to their fear and anxiety.

"I think it's really important for people to understand in real life what that means when we talk about vulnerable populations by age group and [comorbidity] … it shows how impactful those health conditions are."

Beyond the end of the COVID-19 pandemic, Edmonton Mayor Don Iveson sees a future of vibrant growth and solidarity for the region.

In a year-end interview with CBC News, Iveson said he believes the sense of community and human connection will be stronger after Edmonton pulls through the adverse effects of the pandemic.

"I think that there'll be a resurgence, a bit of a pent-up demand — explosion for community life, for arts, creativity, investment, entrepreneurship, tourism, the food scene."

Iveson said the spirit of overcoming adversity is in Edmonton's DNA.

"There is community, there is hope. We can look to the better angels in our nature and overcome tremendous challenges by pulling together."

In November, the 41-year-old Iveson announced that he won't seek a third term as mayor in the municipal election to be held next October.

Sweeping new restrictions intended to curb the surge of COVID-19 in the province took affect on Dec. 13. They will remain in place at least for four weeks — through Christmas and New Year's. A full list of the tighter measures is available on the province's website.

Here is the regional breakdown of active cases reported on Monday:

All of Ontario will move into a lockdown on Boxing Day in a bid to curb climbing COVID-19 case numbers and spare hospitals and their intensive care units from being inundated in January, Premier Doug Ford said Monday.

The lockdown will begin at 12:01 a.m. on Dec. 26 and remain in place until at least Jan. 23, 2021 in the 27 public health units that comprise southern Ontario. In the seven public health units in Ontario's north, where daily case numbers have been significantly lower, the lockdown is set to expire on Jan. 9, 2021.

"If we fail to take actions now, the consequences will be catastrophic," Ford said.

Meanwhile, Ontario reported another 2,123 cases of COVID-19 this morning as admissions to intensive care topped those seen during the first wave of the pandemic.

Quebec saw 2,108 new cases of COVID-19 on Monday with hospitalizations up to 1,048, including 146 people in intensive care units. Manitoba reported four deaths and 167 new cases, the lowest numbers in more than a month, while Saskatchewan also announced four new COVID-19-related deaths and 206 new cases.

In Atlantic Canada, new measures meant to prevent any possible surge of COVID-19 over the holiday period have started across Nova Scotia, which announced two new cases on Monday. Newfoundland and Labrador reported no new cases and announced that the province's active caseload has dipped to 28.

In Nunavut, three new cases of COVID-19 have been confirmed since Friday, all in Arviat, according to a government news release.

The number of COVID-19 cases linked to the Big White Ski Resort near Kelowna has jumped to 76. 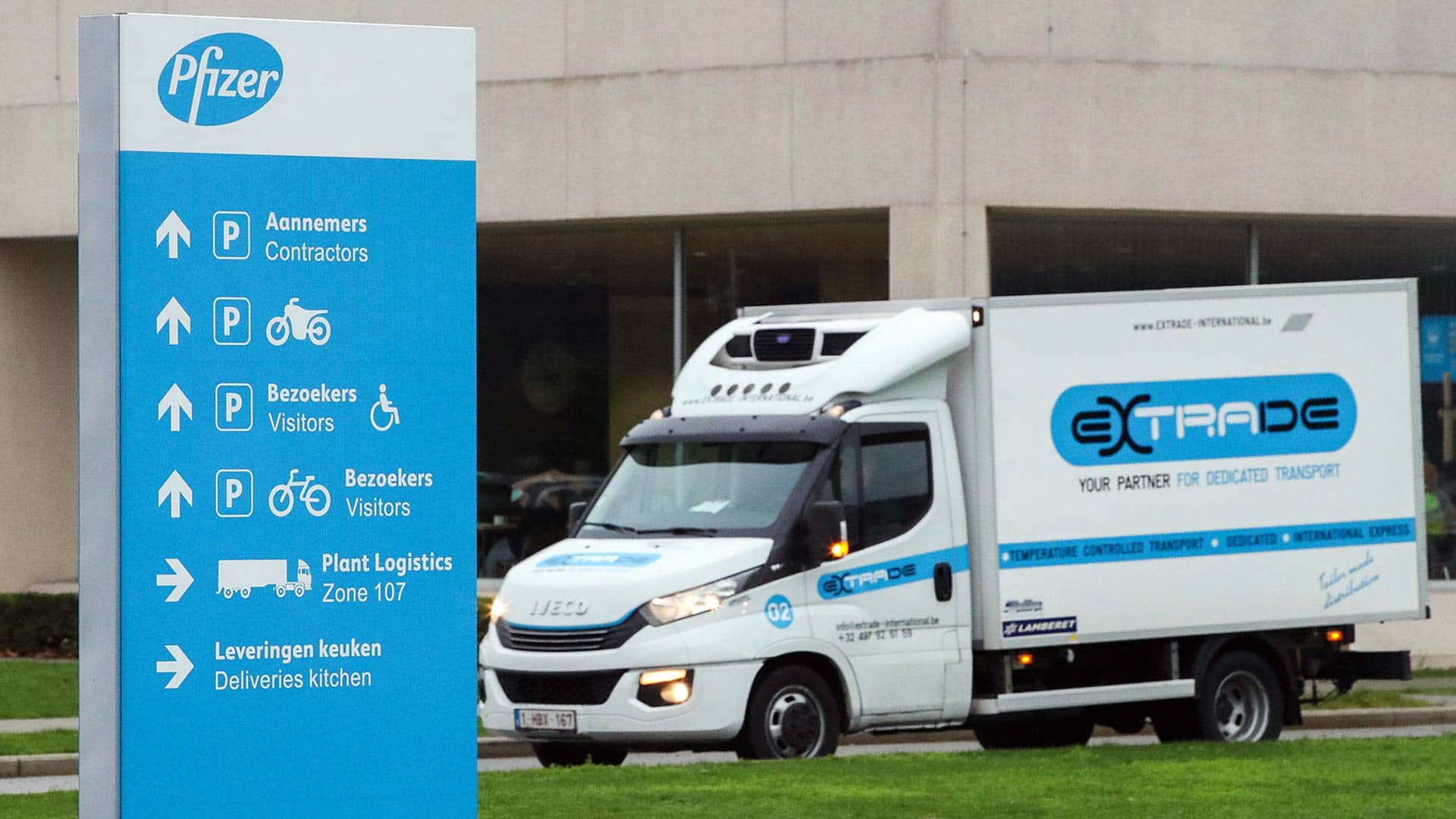 3 months ago
2:00
There are growing concerns that hackers are targeting the COVID-19 vaccine supply chain with the intent of disrupting the rollout once the vaccine arrives in Canada. 2:00

Under the new measures, which are in place until at least Jan. 15, residents can no longer have guests in their homes and outdoor socializing is capped at 10 people.

Starting Saturday, bingo halls and casinos must also close, and personal care services, such as hairdressers, must reduce their capacity to half. Retailers have until Christmas Day before they also need to drop to 50 per cent capacity. Larger stores will be limited to 25 per cent. 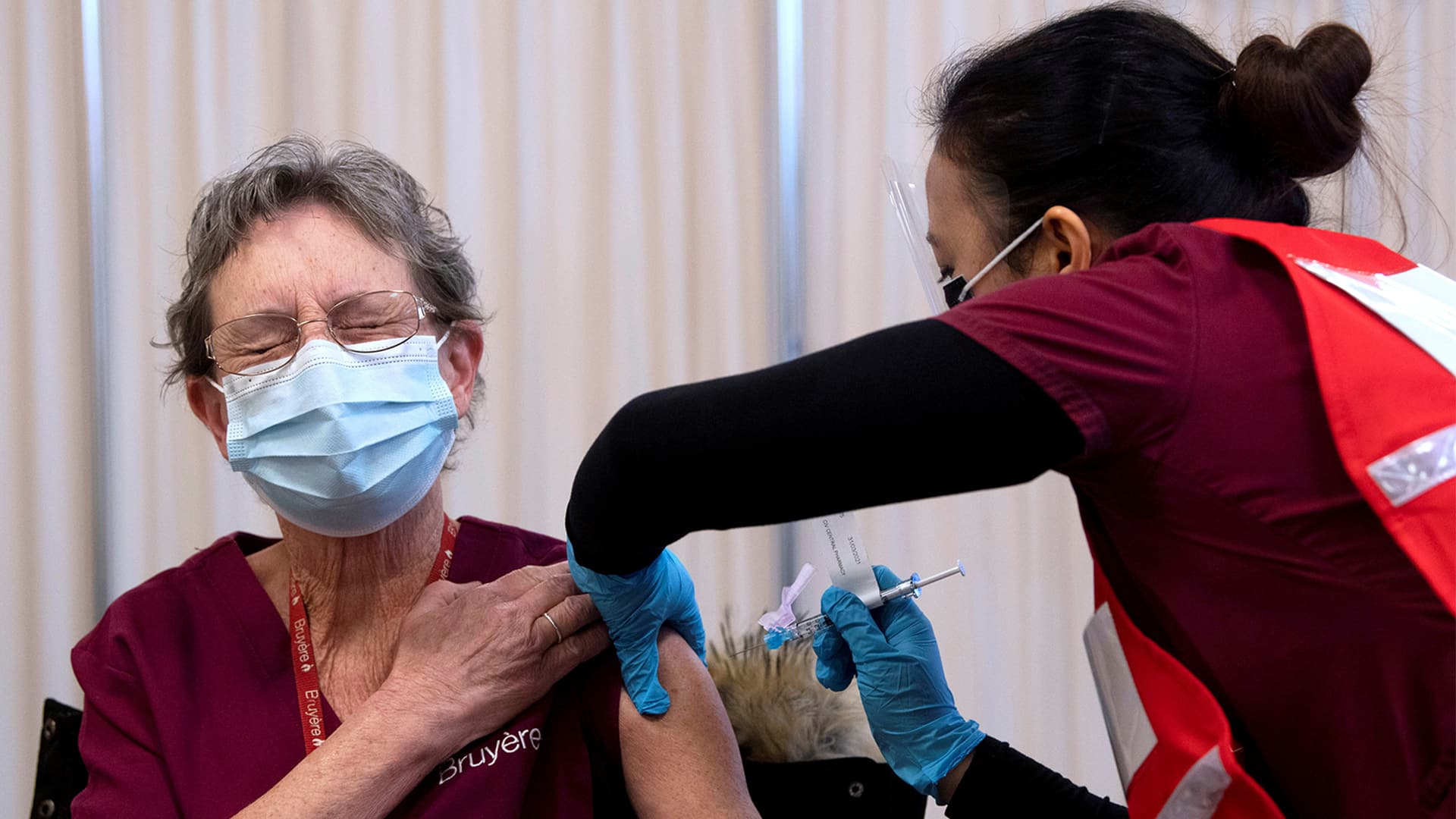 Will COVID-19 vaccine protect against variants?

3 months ago
3:53
An infectious disease specialist answers viewer questions about the COVID-19 vaccine including whether it will protect people against new variants and should seniors outside of long-term care be next to be vaccinated. 3:53