Surgery, tests, nights away from home. Despite the bright colours and large windows that bathe most of the building in light, the Alberta Children's Hospital can be a scary place for its young patients.

Sparkle has worked at the facility for over 12 years, watching children grow up and move on 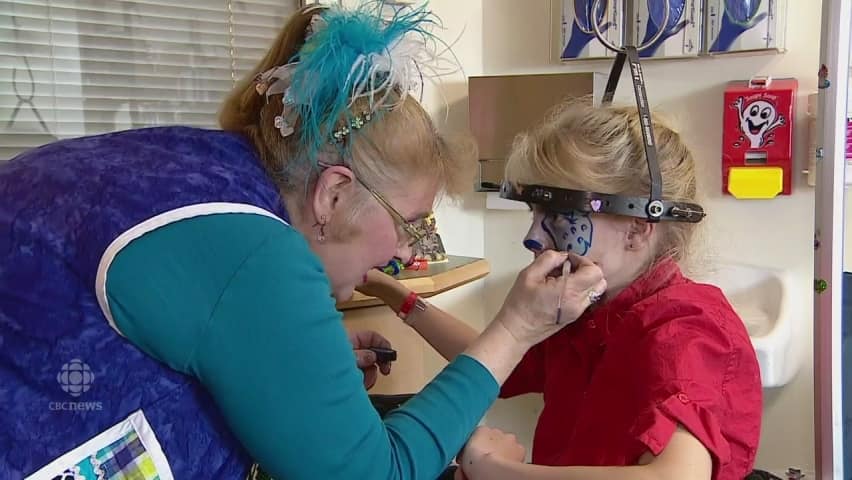 4 years ago
0:49
Sparkle the clown has been bringing light to a sometimes dark place for over 12 years, working with children and families at the Alberta Children's Hospital. 0:49

Surgery, tests, nights away from home. Despite the bright colours and large windows that bathe most of the building in light, the Alberta Children's Hospital can be a scary place for its young patients.

It's why you'll find Sparkle the clown wheeling her cart of paint, tricks and playthings down the scrubbed hallways.

"I help lighten up what might be a scary situation for some children, bring some fun and play in it, distract them away from some of the pain that they may be experiencing and just give them something to look forward to every day," she says.

Sparkle has been working at the hospital as a therapeutic clown for just over 12 years, after a short stint at the Tom Baker Cancer Centre where she also donned her clown attire.

'Sometimes it's sadness and tears'

"It's not always laughter and joy," she said.

Even for Sparkle, that level of emotion can take a toll, but she deals with it as only a clown can.

"I laugh in my car all the way here, especially in crazy traffic," she said.

An unofficial clown since youth

Sparkle didn't just fall into this role, she grew up wanting to be a clown, twisting cherries on her nose as a child to paint it the proper hue. When she was 30 she made it official, heading off to clown school along with her daughter and studying how to work with children and seniors in a hospital setting.

"We're considered non-essential services, but ask the families and the children, we're definitely essential," she said.

She's seen children grow up and move on, but some keep in touch, showing up to have lunch with her, sending emails or calling to check in. Some ask her if she can come with them to the adult hospitals, but she tells them she would disappear if she left the Children's.

"We spent many years together and I watched them grow," she said.

Sparkle isn't about to slow down, and says she looks forward to coming to work, especially if she's been away. It's work that fills her up.