Recent news has rattled recipients and several agreed to talk publicly, in detail, about their lives and their finances, hoping it would give Albertans a clearer picture of life on AISH. 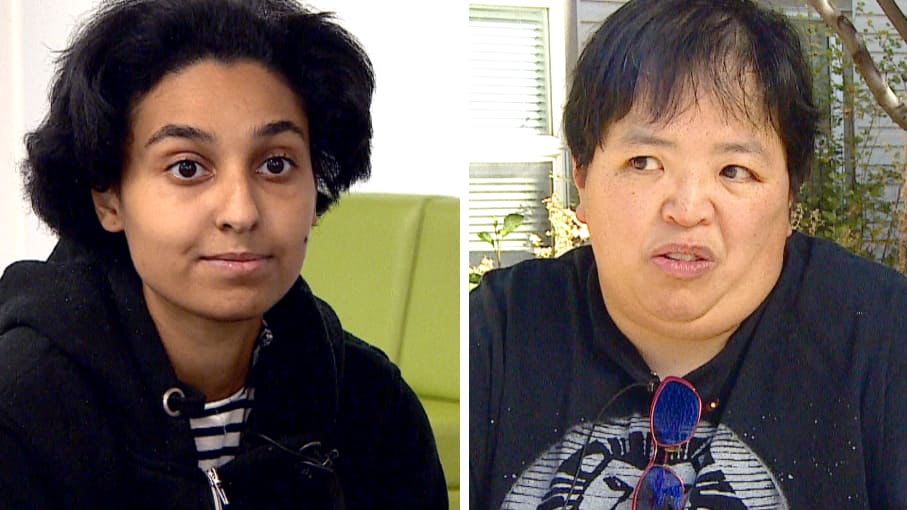 How hard is it to budget on AISH? These Calgarians tell us

3 months agoVideo
2:57
The UCP government wants to revisit the AISH eligibility criteria that roughly 70,000 Albertans rely on. We spoke to these Calgarians struggling to make their budgets work about what that could mean for them. 2:57

Kavin Sheikheldin doesn't love to advertise the fact that she has an intellectual disability; she says it has led some people to exclude her or discriminate against her.

Nevertheless, the 22-year-old Calgary resident decided to speak out on behalf of herself and others who rely on Alberta's Assured Income for the Severely Handicapped (AISH).

She says changes to AISH over the past year have made life even more challenging, and recent talk about further changes being mulled by the provincial government have added to the stress.

"It kind of made me anxious and made my mood change a bit, which isn't good," she said.

Last year, the province spent roughly $1.2 billion on the program.

Individual amounts vary, but the program typically provides people with just shy of $1,700 per month in income support. The benefit used to grow along with inflation, but the UCP government has halted those cost-of-living increases. A subsequent change altered the payment schedules, leading some recipients to miss the due dates for their rent or other bills, incurring late fees many struggled to afford.

Recent news about provincial machinations to make additional changes to AISH has further rattled recipients. In response, several agreed to talk publicly, in detail, about their lives and their finances, hoping it would give Albertans a clearer picture of why they're on AISH and what it's like relying on the program's support.

Matthew Brosseau is 30 years old. He works part-time but relies on AISH for the bulk of his income.

The province encourages people on AISH to work, if they can, to add to their income. Those who earn past a certain threshold begin to have the benefit clawed back, but still end up making more money than if they weren't working at all.

Brosseau used to work two jobs: one at a retail store, the other at the Saddledome. But work at the hockey arena dried up due to the pandemic.

He has Asperger's syndrome, which makes many types of work difficult, if not impossible.

"My motor skills are pretty terrible — just basic things like tying my shoes and tying knots," he said. "I don't drive. I'm not very good at cooking."

The condition also makes navigating social situations challenging, but Brosseau says he's getting better at it.

Now, he lives with his dad. He pays for his share of the rent and splits the bills. Finances are tight, so he was frustrated in the spring when the province changed the payment dates for AISH.

Honestly, it just feels like a kick in the face.​​​- Matthew Brosseau

He used to get his benefits a few days before the end of each month and lined up all his bills so everything would be paid on time. But when the province shifted the payment dates to the first of the month, it threw off the delicate timing.

He said he was especially surprised by the province's move because he had actively campaigned for several United Conservative Party candidates ahead of the 2019 election. At that time, he had heard no talk about plans to change AISH. He even recalls a conversation with Premier Jason Kenney when he broached the topic and left feeling confident a UCP government wouldn't touch the program.

He was further frustrated when he tried to get in touch with the Ministry of Community and Social Services to express his concerns. He described getting the runaround from everyone he tried to reach before eventually being put in touch with a low-level staffer who could offer little more than platitudes.

"Honestly, it just feels like a kick in the face," he said. "It seems like nobody wants to have the dialogue."

Mary Salvani has similar concerns about AISH, but she faces a different problem — she's getting tired of talking about it.

Telling your story over and over

For years, Salvani has been an outspoken advocate for people with disabilities. She has repeatedly put her name, her face and her story out there for public consumption.

It can get wearing.

"I don't think anyone ever wants to admit they have a disability or that they live in poverty," Salvani said.

Still, she agreed to yet another on-camera interview to convey her most recent thoughts on the AISH situation.

The de-indexing of benefits from inflation has eaten into the real purchasing power of her already tight budget. She counts herself lucky to have good, subsidized housing and low-income discounts for things like her transit pass and internet connection. But applying for all those programs takes a toll, too.

"It's not easy to repeat my story, that I'm on AISH, that I'm poor, that I need help and that I have a disability," said Salvani.

Without these kinds of subsidies, though, she's not sure how she would survive.

She devotes almost all of her monthly income to necessary expenses, allocating just $44 per month to "non-essential" items — books and movies.

That leaves her with $42 in wiggle room, which she said is increasingly being eaten up by pandemic-related expenses.

"The cost of things has gone up," she said.

So when the Calgary Herald reported in September, based on an internal government source, that the province was looking at cutting AISH benefits, Salvani's heart sank.

"Fear was my initial reaction to it," she said.

"After my initial reaction, anger, because there's so many people that would be greatly affected by AISH cuts."

In response to the initial news, the government at first didn't deny it was considering cuts.

A few days later, Kenney said his government wouldn't cut the amount people receive, but it was looking at changing the eligibility criteria for the program, itself.

Kenney described the current AISH program as the "most generous" in Canada and said the province is always looking at ways to find savings and deliver programs more efficiently.

"Initially, AISH was a program designed for the severely handicapped, but the population of people has been growing far, far faster than the general population," the premier said on Sept. 15.

The opposition jumped on the premier's comments, with NDP Leader Rachel Notley accusing Kenney of wanting people "thrown off AISH."

In response, the premier's lead issues manager, Matt Wolf, laid out more details of the government's thinking, in a series of social-media posts.

He tweeted that the program is for the "SEVERELY handicapped" and said thousands of people currently receiving AISH benefits were admitted to the program for life based on a "diagnosis for anxiety, ADHD, etc."

AISH = Assured Income for the SEVERELY Handicapped. <br><br>But 1000s of ppl with diagnosis for anxiety, ADHD, etc. on lifetime AISH coverage. <br><br>AISH rolls growing at 3 times rate of population growth. Not unrealistic to look at if AISH is truly focused on "severe handicaps." <a href="https://twitter.com/hashtag/ableg?src=hash&amp;ref_src=twsrc%5Etfw">#ableg</a> <a href="https://t.co/ECH1IX33Vf">https://t.co/ECH1IX33Vf</a>

"There are also conditions that may have been completely debilitating decades ago, but with modern therapy and medications, someone may be able to work part-time today," Wolf added. "AISH as it stands now is lifetime enrolment, with no reconsideration."

Salvani said she was struck by how the government has highlighted mental-health conditions, in particular, and she worried about what that might mean.

"A lot of people that live in places like the one I live in have a mental illness," she said.

'Anxious about getting cut off'

For Sheikheldin, who calculates her monthly budget down to the penny, all the recent political sparring has only added to the kind of uncertainty she tries to avoid.

"When I hear that, it makes my mental health worse, because I'm anxious about getting cut off," she said. "And that's another reason, too, I'm on the program.… Thank god I have a counselling service that helps and supports me."

The premier has since offered more detail on what the provincial government is planning with respect to AISH. He addressed the topic during a question-and-answer session on Facebook. (This happened after Sheikheldin, Salvani and Brosseau spoke with CBC News for this story.)

Kenney reiterated that those receiving the income support would not see their benefit cut, provided they qualify for the program. But he said the province would be taking a hard look at whether everyone who is receiving AISH should be receiving it.

In his four-minute answer, he used the word "severe" or "severely" nine times, repeatedly suggesting that many of the people on the program are not as disabled as they should be in order to qualify under what he described as the original intent of AISH.

"Are we serving people through that program who are not severely disabled? That's a legitimate question for us to examine, I think, and to see whether there are other programs that could better serve people who might have temporary health challenges or less debilitating handicaps than those who were originally the goal of the program," Kenney said.

"We're happy," he added, "to receive input from you or other members of the public."