Three more horses had to be euthanized after going down during the final night of the chuckwagon races at the Calgary Stampede, bringing the total number of horses that died during this year's event to six.

Three more horses had to be euthanized after going down during the final night of the chuckwagon races at the Calgary Stampede, bringing the total number of horses that died during this year's event to six.

Just after 9 p.m. Sunday, a horse from Evan Salmond's wagon went down during a turn in Heat 8 of the Rangeland Derby. A tarp was brought out to cover the area where the incident occurred shortly afterward.

According to a release from the Stampede, the right lead horse of Salmond's wagon fractured its left hind cannon bone while running. Two other horses on the team then also suffered injuries.

All the horses received veterinary care on the track, but the medical team determined they could not be treated, the organizers said.

The three horses were euthanized, said the Stampede. In a statement, the organization called the situation "challenging" and upsetting to both the Calgary Stampede and to the community.

The Stampede also said it is "committed to initiating a thorough review process" around chuckwagon safety, though the organization said it did not yet know what that review would look like.

The first horse to be injured had been "fully cleared to run" by a vet, according to Stampede spokesperson Kristina Barnes.

"There are of course factors we can't control," Barnes said. "We can't anticipate that those things will happen."

Three horses had already died in chuckwagon races in this year's 10-day event.

During Thursday's Heat 7, Salmond's lead horse died after it hit a guard rail and stumbled to the ground.

A review of the incident determined that chuckwagon driver Chad Harden's rig got in the way of another driver, Danny Ringuette, causing the third wagon that belonged to Salmond to hit the rail.

Stampede officials slapped Harden with a $10,000 fine and banned him from competing in this Calgary Stampede and future ones for his part in the incident, citing a zero-tolerance policy for "preventable accidents and injuries."

A disqualification from the remainder of the Calgary Stampede means Harden won't be invited back to compete. He will, however, be permitted to apply for reinstatement as early as Sept. 1.

Mike Whittle, a member of the independent chuckwagon safety commission that reviewed the incident, said it was the first such ban he could remember.

A Stampede spokesperson said officials confirmed via microchips that the horses that died Sunday were not the same horses involved in Thursday's crash.

Earlier in the week, two other horses died.

A horse on Obrey Motowylo's wagon team running in Heat 2 on Wednesday was put down after it suffered a broken leg.

Last Monday, a horse belonging to 2012 Rangeland Derby winner Troy Dorchester died after suffering an internal medical issue that the Stampede says was not related to racing.

The 14-year-old gelding had passed a medical evaluation before the race.

Animal rights activists were quick to renew their calls for an end to the rodeo and chuckwagon races at the Stampede.

Camille Labchuk, the group's executive director, said in a statement that this year's Stampede was the deadliest one for animals in a decade, with a "level of carnage not seen since 2010."

An analysis by the Vancouver Humane Society indicates that 102 animals have died in Stampede events since 1986.

The video below shows the chuckwagon race crash on July 12, which led to one horse having to be put down. Graphic warning: This video may be disturbing to some viewers. 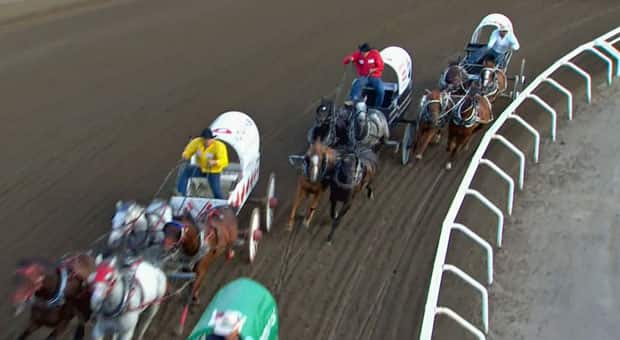 2 years ago
1:36
Warning: This video contains scenes some may find difficult to watch. A driver was fined and disqualified from the rest of the Calgary Stampede after a horse died in a chuckwagon race Thursday. 1:36

No rodeo or chuckwagon participant or event has been prosecuted in Canada since 1950, Labchuk said.

"Alberta law makes it illegal to inflict unreasonable distress on animals, and there are no exemptions for rodeos," said Labchuk.

"Nearly every single year, horses suffer horrific injuries and die in the 'half mile of hell' chuckwagon races. It is entirely foreseeable that these horses will experience distress and death, all for the trivial sake of entertainment."

The group is calling on law enforcement, including the Calgary police, Calgary Humane Society and Alberta SPCA, to bring the concerns before the courts.

"Rodeo events are not above the law and should no longer be given a free pass to kill animals," she said.

The Calgary and Vancouver humane societies have also been critical of chuckwagon races.

Speaking on CBC Calgary's Alberta@Noon on Monday, Vancouver Humane Society spokesperson Peter Fricker said his organization is calling on the Stampede to suspend the races and convene an expert panel to determine whether the sport can be fixed.

"We're willing to give the Stampede a chance to see if it could be made safer," he said.

But Dr. David Chalack, a veterinarian and former Stampede president, told Alberta@Noon that putting the chuckwagon races on hold during a review is not warranted.

"There's no reason to put it on pause," he said.

Chalack said the Stampede has worked hard to incorporate ever more risk-mitigation measures and become more inclusive of outside expertise and points of view.

He said during his tenure, rodeo and chuckwagon officials worked collaboratively with the Calgary Humane Society, something he suspects isn't possible in the case of the Vancouver Humane Society.

This graph tallies animal deaths, by year, at the Stampede. Use the drop-down menu to see the data by animal type:

Here's an overall roundup of animal deaths at the Stampede since 1986:

The Stampede's roots can be traced to 1886, when the Calgary and District Agricultural Society held its first fair.