Four skateboarders have received special recognition after they stepped in when a man was sexually assaulting a teenage girl, scared him off, chased him down, and held him until police arrested him.

4 friends stop a sexual assault, chase down and detain the attacker until police arrived

Four skateboarders received special recognition after they stepped in when a man was sexually assaulting a teenage girl, scared him off, chased him down, and held him until police arrested him.

The young men — and 25 other Calgarians — received an award from Chief Const. Roger Chaffin in recognition for their exceptional bravery at the Chief's Awards Gala Thursday night.

The four friends were in an underground parkade at Chinook Mall when they saw a well-dressed man carrying what appeared to be a seriously drunk and distraught young woman.

"She was screaming and yelling. She just wanted to be out of there. She was all scuffed up and dirty," said Carsyn Wright, one of the longboarders. 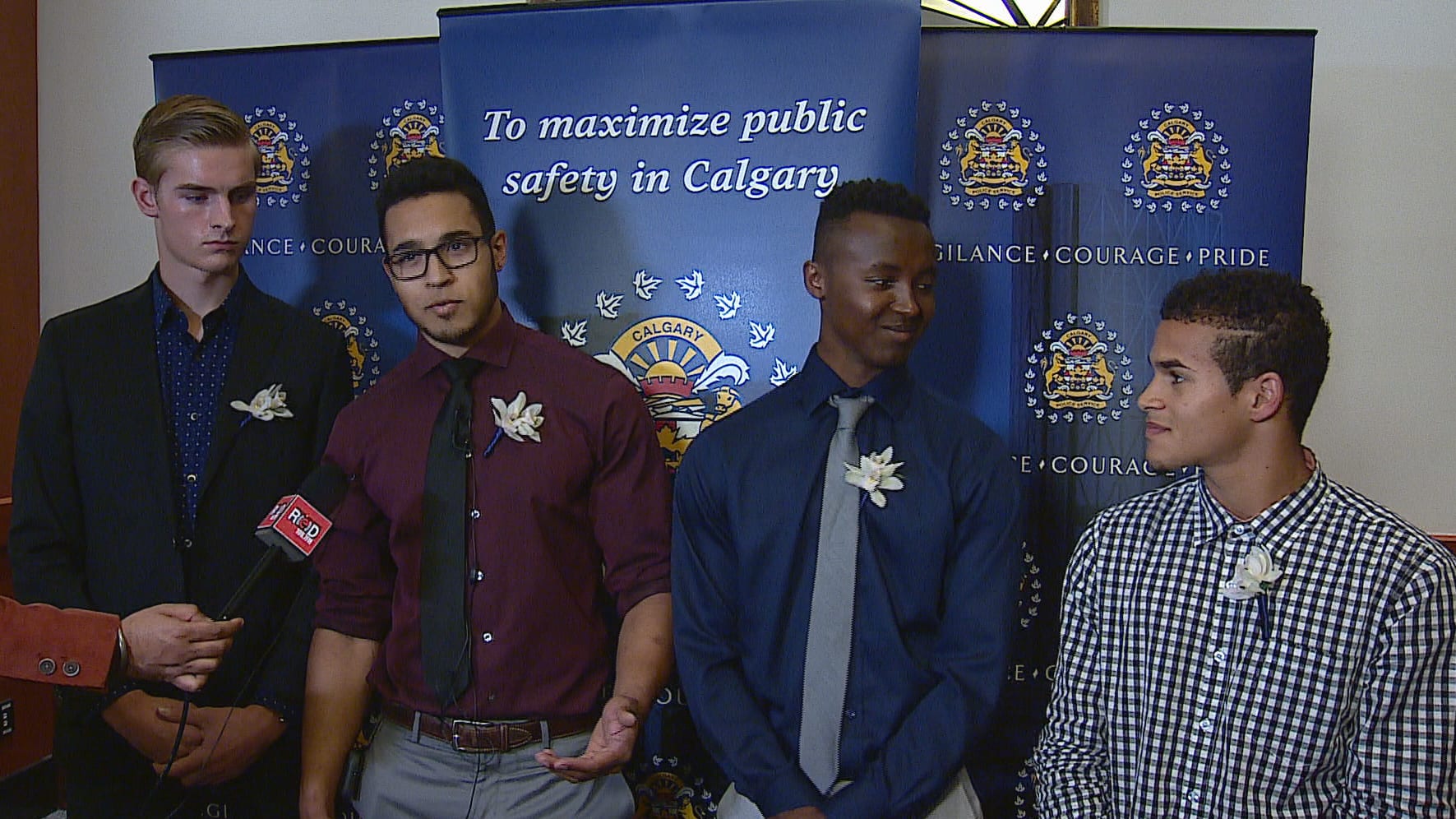 'We needed to be there for her,' says skateboarder Carsyn Wright

5 years ago
0:22
Carsyn Wright and three of his friends stopped a sexual assault and won special recognition for their service. 0:22

They stopped the man and began questioning him to determine whether or not the young woman was safe.

The man answered the group's questions, saying he was trying to phone the girl's father for a ride home.

The group, believing him, let him go and watched the pair enter a nearby stairwell.

"You don't want to really think of the worst in somebody like that. You don't want that situation to be real, so you just brush it off and hope for the best," Wright said.

The four friends rode off with the intention of returning to check on the girl a few minutes later.

When they returned, they saw the man sexually assaulting the young woman.

"He had her in a stairwell, bent over, and just, it was disgusting," Wright said.

Arnaud Nimenya said his initial reaction was one of shock. "You walk in, and you see something like that, and you freeze. You don't know what to do."

When they realized what was happening, they immediately moved to stop the attack.

"He was trying to walk out and walk away from us," said Nimenya. "He pushed me aggressively out of the way, kinda like just gives me the smile, like, 'I can do this. You can't do anything about it.'"

Instead of letting him get away, three of the skateboarders chased him down, while one remained behind to stay with the victim.

Following the foot chase, there was a physical confrontation in which the man picked up a longboard and began to attack his three pursuers.

Police arrived moments later, arrested the man and charged him with sexual assault.

Later, when police tried to contact the four friends to recognize them for their bravery and service, Nimenya said he was caught off guard.

"We always thought we were going to be in trouble, because we fought with him. When they called us, we didn't wanna answer."

In total, 25 citizens were honoured for bravery at the Chief Awards Gala. Read about some of the other recipients and their acts of courage below:

O'Connor saved the lives of two injured men, one of whom sustained a slash wound to his stomach that left his intestines visible.

O'Connor jumped out of a cab to scare away the attackers outside a convenience store, and then applied pressure to the wound and kept the seriously injured man talking until help arrived.

Eddy watched as the car in front of him failed to move, after the red light switched to green. As other cars honked and swerved around them, he watched it slowly creep into the intersection, drive onto the curb, across a sidewalk and crash into a sign.

Noticing that something was very wrong, he ran over to the car, peered inside and realized the driver needed help.

He smashed the window open with a rock to get the driver out, and then provided CPR and mouth-to-mouth resuscitation.

EMS staff said the driver of that car had suffered a massive heart attack and would have died, if not for Eddy.

Dolph and Simpson stepped in when they saw a man strike his ex-wife across the face, after yelling at her in a parking lot in northeast Calgary.

They saw the man grab his ex-wife by the throat and pin her down inside her car while her children screamed from the back seat.

Dolph and Simpson ran over to stop the man, called the police and waited with the woman until help arrived.