#WorldCupVan: A tale of two Metro Vancouverites headed to Brazil

With only a week to go until the 2014 FIFA World Cup, we profile two Metro Vancouverites as they get set to travel to Brazil to cheer their home countries of Ghana and Iran. 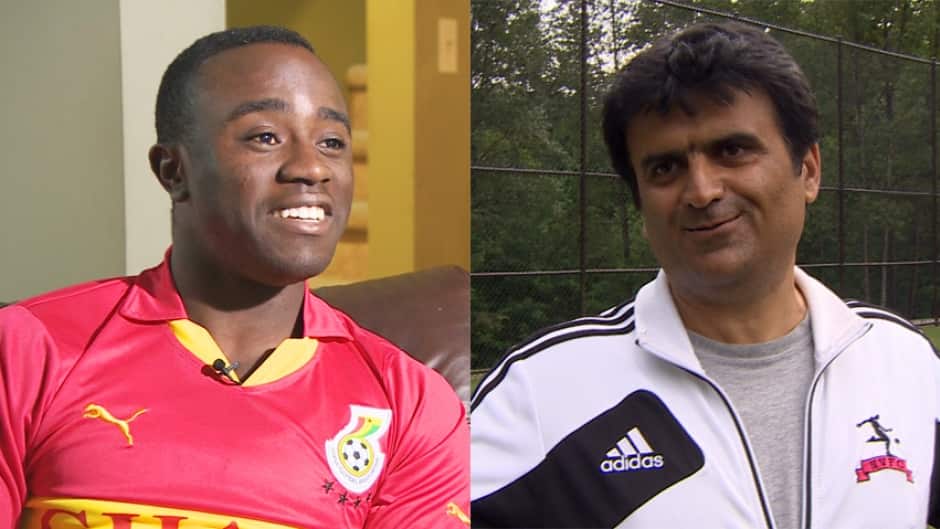 It's easy to find fans from the traditional soccer superpowers, like England, Germany, Italy and Brazil.

But two Metro Vancouverites have different teams to cheer for as they get set to travel to the 2014 FIFA World Cup in Rio de Janeiro.

George Amoaka grew up in Ghana and always rooted for the Ghana Black Stars, the country's much-loved national soccer team.

Now living in Metro Vancouver, Amoaka applied online to volunteer at this year's World Cup and in​ two weeks he'll be in Brazil, driving around the stars from his favourite teams.

"I'm looking forward to the atmosphere, to people celebrating and I get to be a part of this," said Amoaka.

"Not just to go there and watch the games, but to participate, to be a part of the games, I just thought it was awesome."

Ghana may be the 82nd biggest country in the world, but when it comes to the passion of it's soccer fans, it's hard to compare.

"We are true competitors in my opinion and with the experience they have gained, they should be watching out for us," said Amoaka.

Friend Prince Opoku, who plays on a local team with Amoaka, says he's a little bit jealous of his friend's good fortune but has agreed to lend him some jerseys so he can dress the part in Brazil.

"We are trying to make it so he has a different Ghana jersey each day, so I am still there, even though I am not there. I will be watching every game," said Opoku.

Amoaka says his friend may be jealous, but he's sure he is happy for him.

"To see a whole bunch of world cup fans, soccer fans, Ghanaian fans, with their drums and their colours and to see the Black Stars on the field with the national anthem words...I cannot express that feeling."

In North Vancouver, Iranian-born Shahram Hariri is getting ready for a trip to Brazil as well. The former Iranian national player now lives in Canada and coaches youth soccer.

And although he cheers for his birth country, he is hoping the kids he's raised on the soccer field can one day play on the national team for theirs.

"These kids are the future of Canada, I am sure one day Canada will be in a World Cup."

Hariri and Amoaka likely won't cross paths once they head south, but their stories are very similar.

"There is saying in my country," said Amoaka. "It means, 'Something is coming'. Well, it's the Black Stars that are coming, so you better watch out!"

And once he gets to Brazil, he says, it's going to be hard to miss him too.