A Vancouver woman says she is going to have to pay thousands of dollars for her leased car that was burnt in the Stanley Cup riot. 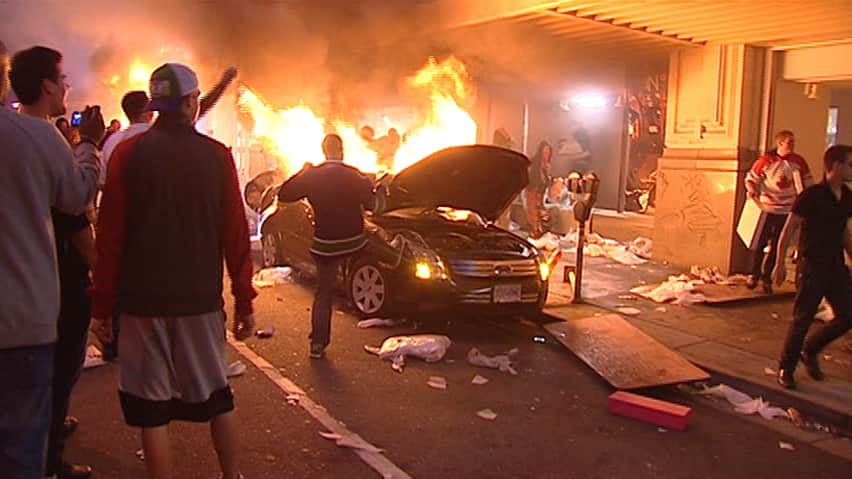 9 years agoVideo
2:20
A Vancouver woman says she must pay thousands of dollars for her leased car that was burned during the riot, the CBC's Leah Hendry reports 2:20

A Vancouver woman says she is going to have to pay thousands of dollars for her leased car that was burnt in the Stanley Cup riot.

Jazmin Perez says she parked her BMW outside the Bay store in downtown Vancouver on the evening of the Stanley Cup riot. By the time she finished shopping large crowds had gathered on the street.

Perez went to get some help to have her car removed from the area, but by the time she got back it had been destroyed by the rioters.

"My car was just burnt to silver metal," she told CBC News.

Perez had insurance on the leased car, but it covered only the market value and not the replacement cost. As a result she still owes thousands more on the lease than she got in insurance, she says.

Perez says the leasing company and ICBC can't do anything and she is now left to cover the loss.

"They say it's not their fault either.  They feel for me, but at the same time, someone needs to pay for this and I signed the papers," she says.

Perez says she's taken a month off to deal with the stress of the situation.

"It's very frustrating, also very stressful, and overwhelming.  I had to take time off work, to sort of take care of myself because of this incurred loss.  I've been on this every day, I'm trying to seek some sort of help, whether through my MLA or through lawyers."

The riot erupted after the Vancouver Canucks lost the final game of the Stanley Cup playoffs to the Boston Bruins.