Woman alleged to have unlawfully injected botox for years under investigation

The B.C. College of Physicians and Surgeons is seeking an injunction against a Surrey woman — Rajdeep Kaur Khakh — who it says may have unlawfully injected clients with botox and other substances while posing as a doctor at salons, "botox parties" and in clients' homes according to court documents.

The B.C. College of Physicians and Surgeons is seeking an injunction against a woman who they say posed as a doctor and unlawfully injected scores of people with botox and other filler substances.

The injunction would stop her from practising medicine.

Rajdeep Kaur Khakh is alleged to have injected botox into clients at salons in various municipalities, at "botox parties" and in their homes and cars.

Only physicians, dentists, and nurses or licensed practical nurses under the direct supervision of a doctor are allowed to do such injections in B.C.

"Unregulated individuals and estheticians are not qualified or authorized to inject botox," the college told her in a letter dated April 2, 2015 that was filed in support of the application.

Khakh is not a registrant with any health profession college, and the College of Physicians and Surgeons says she is violating the Heatlh Professions Act.

In a phone interview, Khakh told the CBC she is remorseful and stopped providing botox and filler injections after being served with the injunction on Oct.  5, the same day it was filed in B.C.Supreme Court.

However, her advertisements were still showing up on Instagram a full week later.

The court documents show the college has been trying to get Khakh to stop for over two years but indicate she allegedly kept doing it even after finally signing an undertaking in August 2016 to "refrain from providing the service of medicine" and "cease using titles which are reserved ... for registrants of the college"

She called herself Dr. Rajji and her handle was "drlipjob" on Instagram, according to statements filed as part of the injunction application. She offered specials and contests as part of her advertising campaign.

College tried to get her to stop

Khakh came to the college's attention in March 2015, after it received an anonymous tip about a woman who was going to be performing "injectables" at a spa in Tsawwassen.

The college determined it never had a Dr. Raj Khakh registered in B.C. and asked the spa to "cease and desist" from offering the services.

That same month, Khakh contacted the college and told its investigator, Etienne van Eck, that she had attended medical school in India and had taken botox training at Vancouver Laser, according to court documents.

While she told van Eck she got the botox from India, she recently told CBC she only injected Canadian botox.

According to van Eck's affadavit,  she also told him she only gave injections to herself and her family members. That same month, the college sent her the first copy of the undertaking to stop practising medicine.

According to documents filed in support of the injunction, in May, a library employee in Abbotsford contacted the college about a forged medical licence found in a photocopier with "Dr. Rajdeep Kaur Khakh" taped over the name of the original registrant.

Four companies which make products contacted the college individually, checking credentials for a Dr. Raj Khakh who used the same fake licence number in her dealings with them, according to the court documents.

One of them, a Swiss company named Galderma had already sent her about $164,000 worth of products by then, though she used a residential address and a hotmail account for the business.

A company employee told the college she had personally witnessed Khakh injecting someone at a clinic in Surrey, according to notes filed in court.

In his affidavit, van Eck says he communicated for months with Khakh, asking her to sign and get a witness on the undertaking. He says she kept stalling, even though she reportedly admitted to him she had forged a licence.

In July 2016, van Eck swore he personally went to a spa and "hand-delivered a letter to a woman who identified herself as Ms. Khakh."

In June, van Eck's affidavit says the college got a tip Khakh was doing botox and juvederm injections at a hair salon in Surrey and marketing herself on social media as "Dr.Lipjob".

That's when the college decided to hire Paladin Security to gather evidence to help with the investigation.

It searched the garbage left outside the home and found packaging and syringes, including Restylane injectable gel with lidocaine and Galderma Restylane fine lines-L, evidence they could match to invoices from the pharmaceutical company, say the allegations contained in the college's application for the injunction.

It also conducted an undercover operation with an agent posing as a potential client who backed out just before getting a lip injection from Khakh. 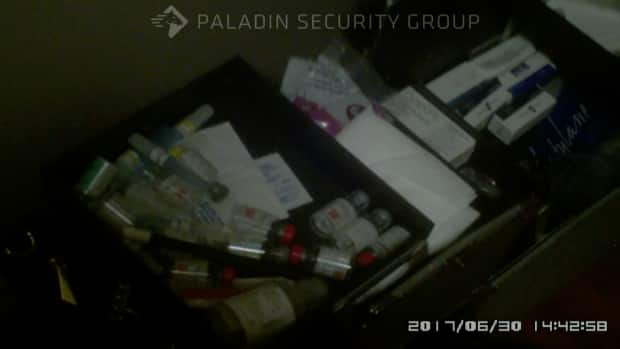 3 years agoVideo
0:30
Rajdeep Kaur Khakh prepares to inject half a syringe of lip filler when the subject backed out 0:30

Khakh told CBC she had a medical degree from University of Punjab in Patiala but said she failed the licensing exam.

When asked why she did all this, she told CBC: "I got caught up in the whole doctor thing. I didn't make it in life."

The college says it cannot comment on the case while it waits for the injunction to be granted.  However, in a July 2016 letter to a Surrey salon where Khakh had allegedly provided treatment, van Eck said: "This unlawful practice of medicine places the public at risk."

None of the allegations against Khakh have been proven in court.

In a general statement to CBC, college spokesperson Susan Prins says that non-registered and unlicensed practitioners have no insurance and may be "subjecting their clients to an increased risk of infection and blood-borne diseases; procedures may result in the destruction of skin tissue ... and (they may) use drugs or other substances without understanding all their properties and contraindications, or use drugs or other substances for improper purposes or in inappropriate quantities, all of which expose clients to the risk of serious harm or death."

It recommends that members of the public contact the regulating body if they have any doubts about a practitioner's licensing.

With files from Anita Bathe and Natalie Clancy