Parks Canada is warning the public about wolves near Ucluelet, B.C., in Pacific Rim National Park, after three encounters showing the animals are too comfortable around people.

'I was stuck between the ocean and the forest, and they were corralling us'

Brent Woodland was almost finished his normal run with his dogs at dusk on Wickaninnish Beach, near Ucluelet, B.C. last week, when he saw something moving on the sand dunes.

It was a large wolf, bigger than his 40-kilogram dogs, standing just two metres away.

"It was stalking us. I don't know how long it had been watching us," said the 36-year-old Ucluelet resident.

And it didn't back down, until a 911 call brought RCMP sirens blaring.

After Woodland's wolf encounter, and two others that day in the Long Beach area of Pacific Rim National Park Reserve, Parks Canada has issued a wolf advisory and warning for the area, including advice on how to react to the aggressive, habituated wolves that seem a little too comfortable around people.

When Woodland saw the wolf, he turned to face it, and made himself as big and loud as possible — just as wildlife officials advise.

"I was making eye contact with it. I was throwing rocks and sticks at it ... screaming and yelling as loud as I could ... trying to get this thing to go away," he said.

"The wolf ... held its ground, and it turned into a stare-down at that point."

He thinks the wolf was hunting his dogs, goading them to chase it toward the tree-line, but the dogs were leashed and stayed at Woodland's side.

Woodland said each time the wolf backed off a little, he and the dogs made a few steps progress to the park visitor's centre — his plan for a safe escape.

Then, he saw more shapes in darkening distance, more wolves moving along the tree line.

"It wasn't acting alone," he said.

"I was stuck between the ocean and the forest, and they were corralling us.

"I was surrounded by these guys basically." 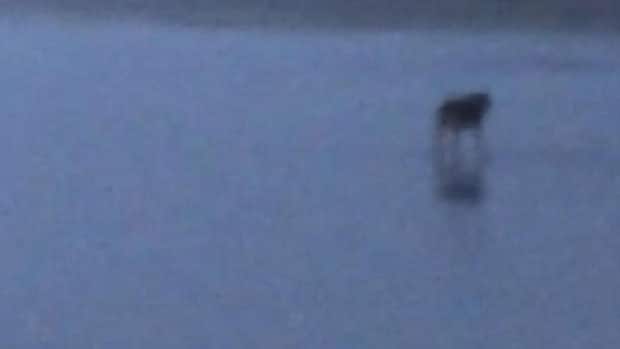 Cellphone video of encounter with wolf

4 years ago
0:21
Brent Woodland shot this video on Wickaninnish Beach, near Ucluelet 0:21

After what he estimates was about 30 minutes of screaming at the wolf on the beach, Woodland finally made it the 400 metres to the closed visitor's centre.

From the balcony, he called 911, and RCMP sirens finally scared the pack off.

The wolf that approached Woodland appears to be habituated to humans and was likely hunting the dogs for food, says Parks Canada.

"This wolf likely has had many interactions with people over the months and years leading up to this, and that's what made it comfortable coming that close," said Todd Windle, a human-wildlife conflict specialist at the Pacific Rim National Park Reserve.

Now, park staff are trying to bring back the wolves' natural wariness of people, "hazing" them by yelling, using air horns and even loud cracker pistols if necessary.

"We're doing extra patrols, with the attempt to reinstill some of that wariness, what we call 'hazing' ... to try and have them be a little bit more timid around people," said Windle.

'We're in their zone'

Parks Canada also wants to educate the public that Woodland's encounter wouldn't have ended so well if he hadn't had leashed dogs and known the right way to act with a wolf.

Earlier that day, one of the other wolf encounters began with a man trying to get too close — for a good picture on his phone.

"It's quite understandable that that's quite exciting for people, but what we don't want them to do is to try and get close enough to get a good shot on their phone."

As for Woodland, he may go back to his normal beach run but hasn't yet.

"I don't want to get the wolves in trouble. We're in their zone," he said.

"It was an awesome encounter for sure. It was pretty freaky."