Smoked in: A look back at B.C.'s haziest wildfire seasons over the past 20 years

British Columbians have got used to smoky skies in recent years, with wildfires and the resulting haze becoming part of a normal summer in a province where the warming climate is marked by longer, more intense fire seasons. These photos are a look back at some of the lengthiest, most memorable wildfire smoke events B.C. has seen since the turn of the century.

From 2003 to 2020, wildfire smoke in B.C. has often led to dangerously unhealthy air quality

Trying to find the sun through the haze. Walking outside to the sharp smell of campfire and the dry taste of ash. Sitting stuck inside with a feeling of unease, the grey having brought on the blues.

British Columbians have got used to smoky skies in recent years, with wildfires and the resulting haze becoming part of a normal summer in a province where the warming climate is marked by longer, more intense fire seasons.

The smoke has caused air quality to rise to dangerously unhealthy levels dozens of times over the past two decades, especially in B.C.'s Interior.

These photos are a look back at some of the lengthiest, most memorable wildfire smoke events B.C. has seen since the turn of the century. 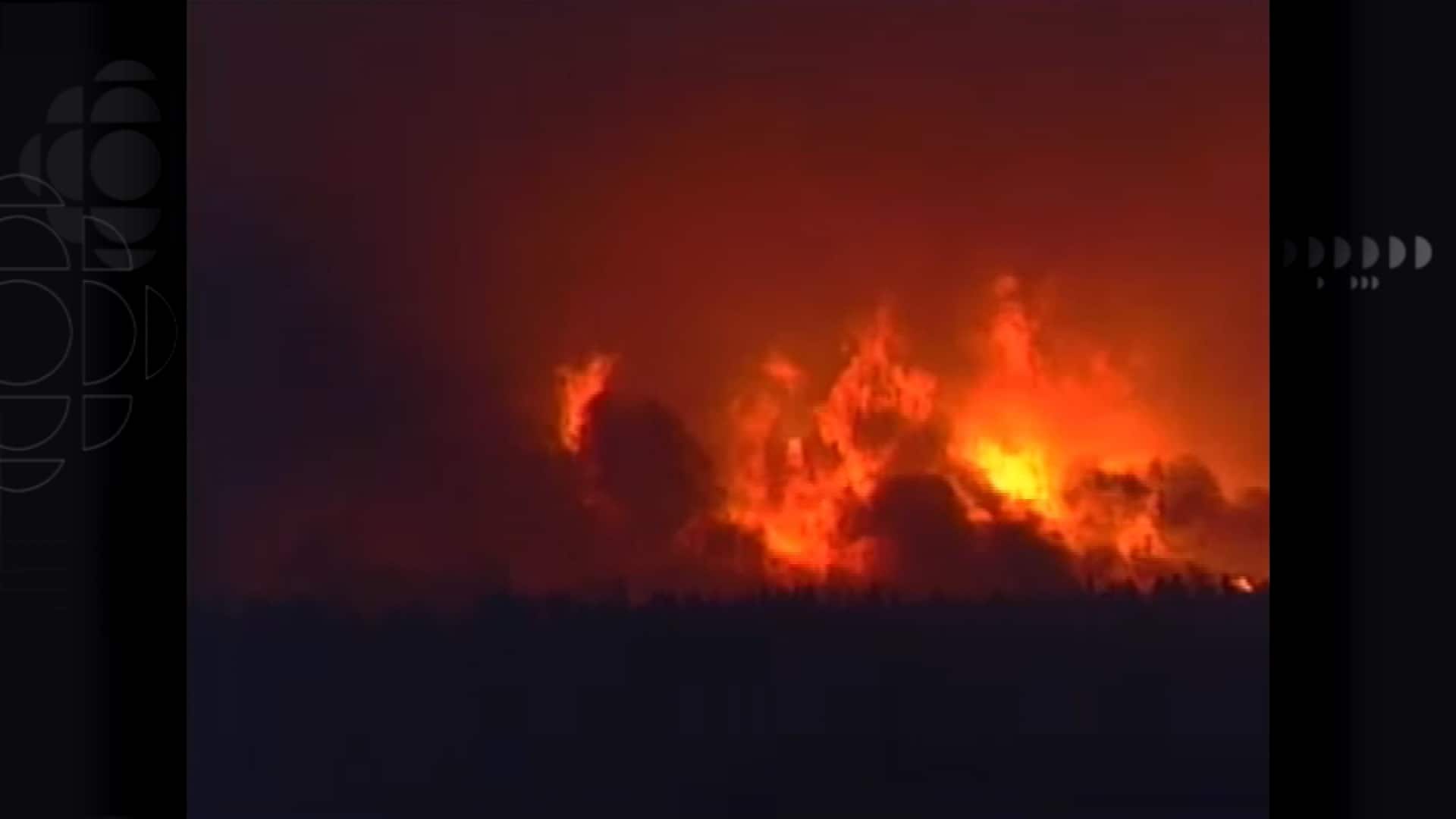 From the Archives: Smoke from wildfires in 2003 blankets B.C.'s Okanagan

The summer of 2003 is easily recognized as one of the worst wildfire seasons the province has ever seen, in terms of both the fires themselves and also the harm to people and property. The Okanagan Mountain Park forest fire, alone, destroyed more than 230 homes in the Kelowna area and caused $200 million in damage.

The fires spewed thick smoke into the air over the southern Interior for days. The skies glowed orange at night as light from the flames reflected off the plumes.

Kamloops and Cranbrook had the most days with reduced visibility that year, according to Environment Canada, with about four each. Little of the haze reached the Lower Mainland.

The following year was also a terrible one for communities in B.C.'s far north and into Yukon. The Yukon communities of Whitehorse, Old Crow and Mayo saw up to 16 days of smoke in 2004 from wildfires burning in B.C. 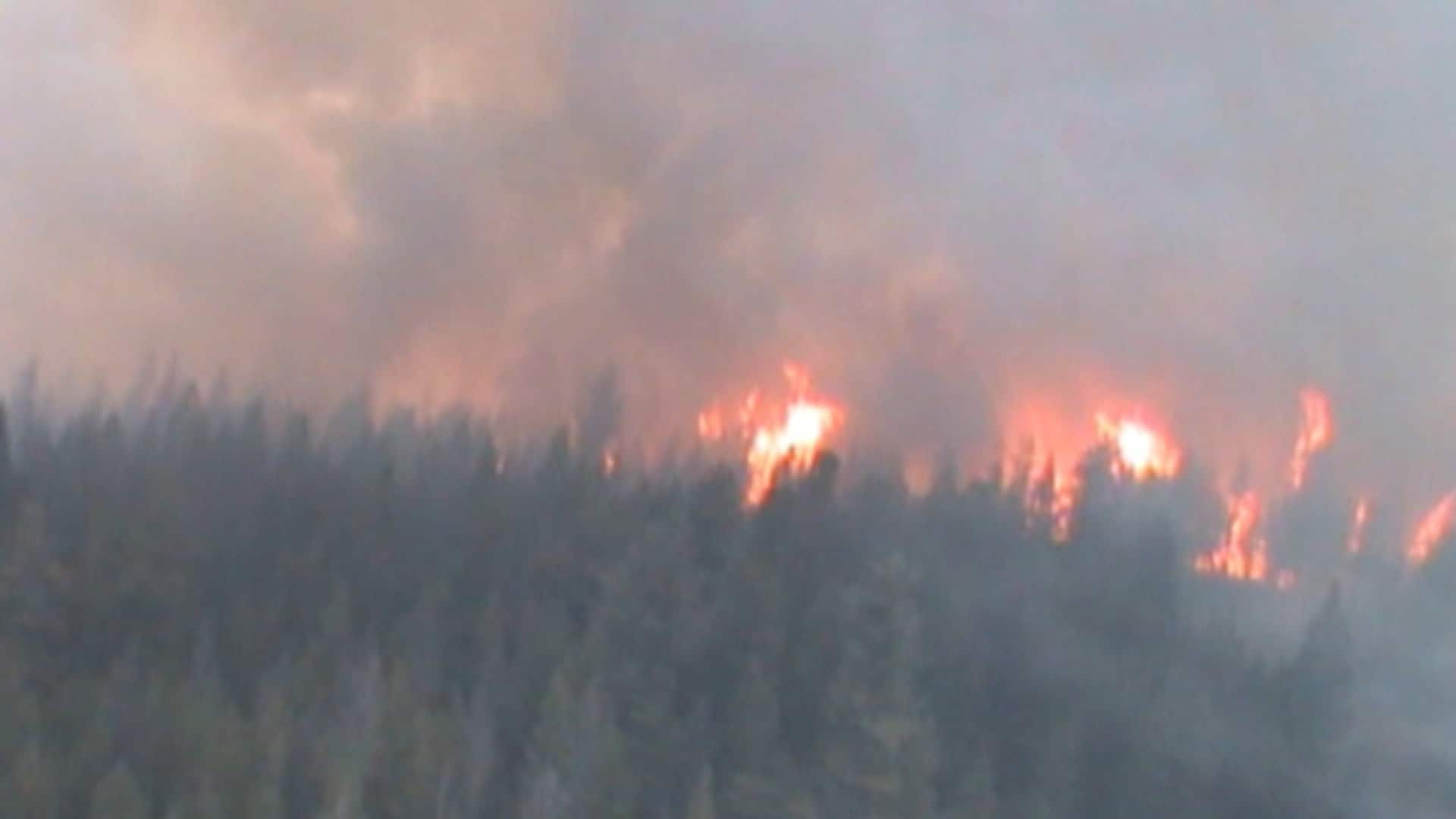 From the Archives: Smoke chokes B.C. communities for weeks in 2010 wildfire season

2 months agoVideo
2:04
Conditions in Williams Lake, B.C., and the surrounding areas were dangerously bad in 2010 as a result of the Binta Lake Wildfire. Around 130 people from the Tl'etinqox-t'in First Nation left their community to escape the haze. 2:04

Conditions in Williams Lake, Prince George, Quesnel and surrounding areas were dangerously bad in 2010 as a result of the Binta Lake Wildfire. The blaze, southeast of Burns Lake, burned 400 square kilometres and resulted in evacuation orders and alerts in several communities.

Air pollutant levels are measured in B.C. in micrograms per cubic metre (µg/m3). The acceptable limit is around 25 µg/m3 for a 24-hour period.

Environment Canada said visibility was reduced for more than 10 days. There were a few days of reprieve between smoke episodes that summer, though, which hasn't been the case in more recent years. 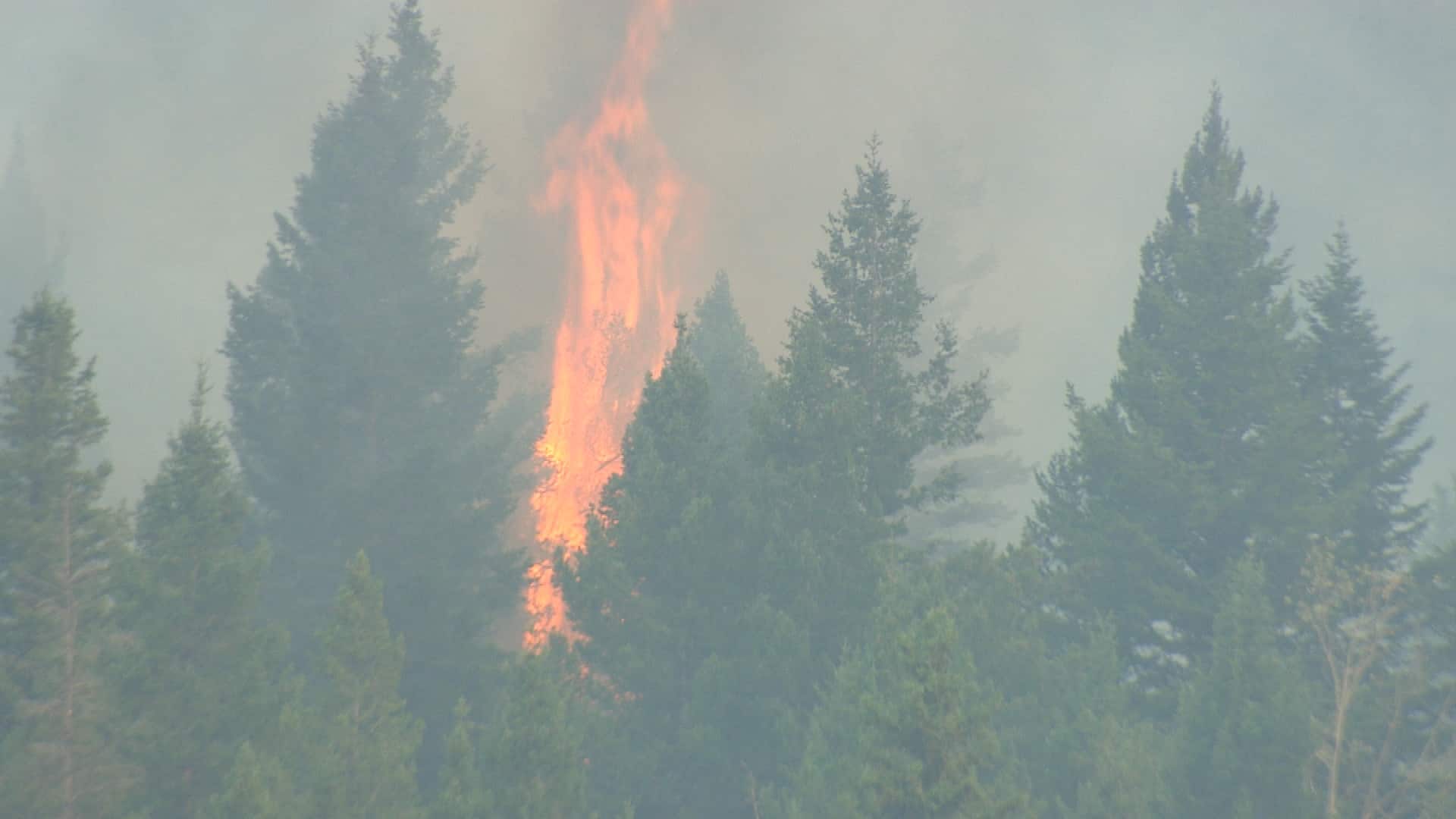 From the Archives: Wildfire smoke sets record for hazy days in Kamloops, B.C.

2 months agoVideo
0:57
The wildfire season of 2017 was, at the time, the worst in provincial history. Kamloops set a new record for the most hours spent with low visibility that summer, according to Environment Canada, with 18 smoky days. 0:57

The wildfire season of 2017 was, at the time, the worst in provincial history.

A haze fell over the Lower Mainland as winds carried smoke from the wildfires in the B.C. Interior to the coast. Environment Canada issued a number of special air quality and weather advisories for Metro Vancouver, the Fraser Valley, the Sunshine Coast and eastern Vancouver Island as the smoke and a heat wave created serious health risks.

Kamloops set a new record for the most hours spent with low visibility in 2017, the agency said, with 18 smoky days. The air quality reached an extreme 18 out of 10 rating on the Air Quality Health Index.

Williams Lake and Penticton weren't far behind with 14 days, while Abbotsford had 10 days.

An enormous plume of smoke visible from space in 2017 also formed the largest cloud of its kind ever observed, according to a 2019 study. Researchers found the cloud, called a pyrocumulonimbus, was big enough to circle the northern hemisphere. 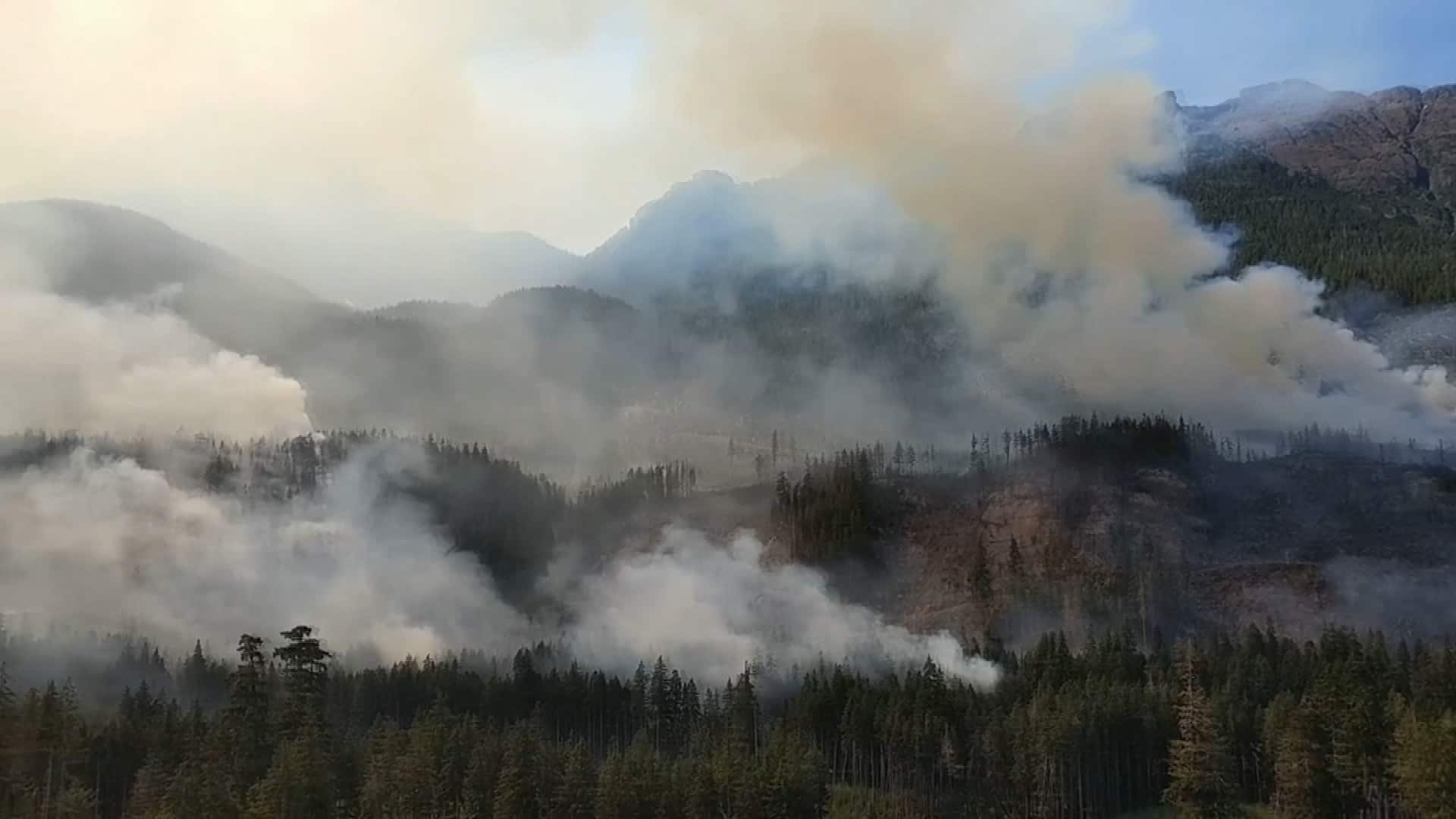 From the Archives: Smoke fouls air quality in B.C. for weeks on end

2 months agoVideo
0:52
Smoke choked B.C. in the summer of 2018, compounded by additional plumes drifting north from similar fires in Washington state. The Lower Mainland was stuck under health advisories for 22 days in a row, and cities from Vancouver Island to the Kootenays had poor air quality. 0:52

The B.C. wildfire season in 2018 eclipsed the previous year's as the worst recorded in provincial history. Smoke choked the province again that summer, compounded by additional plumes drifting north from similar fires in Washington state.

The Lower Mainland was stuck under health advisories for 22 days in a row. Flights at several airports in the Interior and West Kootenay regions were cancelled because pilots couldn't see. As was largely the case in 2017, only B.C.'s north and part of the western coast were spared.

Penticton, Williams Lake, Cranbrook, Victoria, Fort Nelson, Fort St. John and Abbotsford had the most days with poor visibility, ranging from 15 days for Penticton to six for Abbotsford.

The thick smoke also created air-quality problems for much of Alberta, Saskatchewan and southwestern Manitoba, as winds drove the haze eastward. The smoke even reached Atlantic Canada and as far as Ireland, The Canadian Press reported. 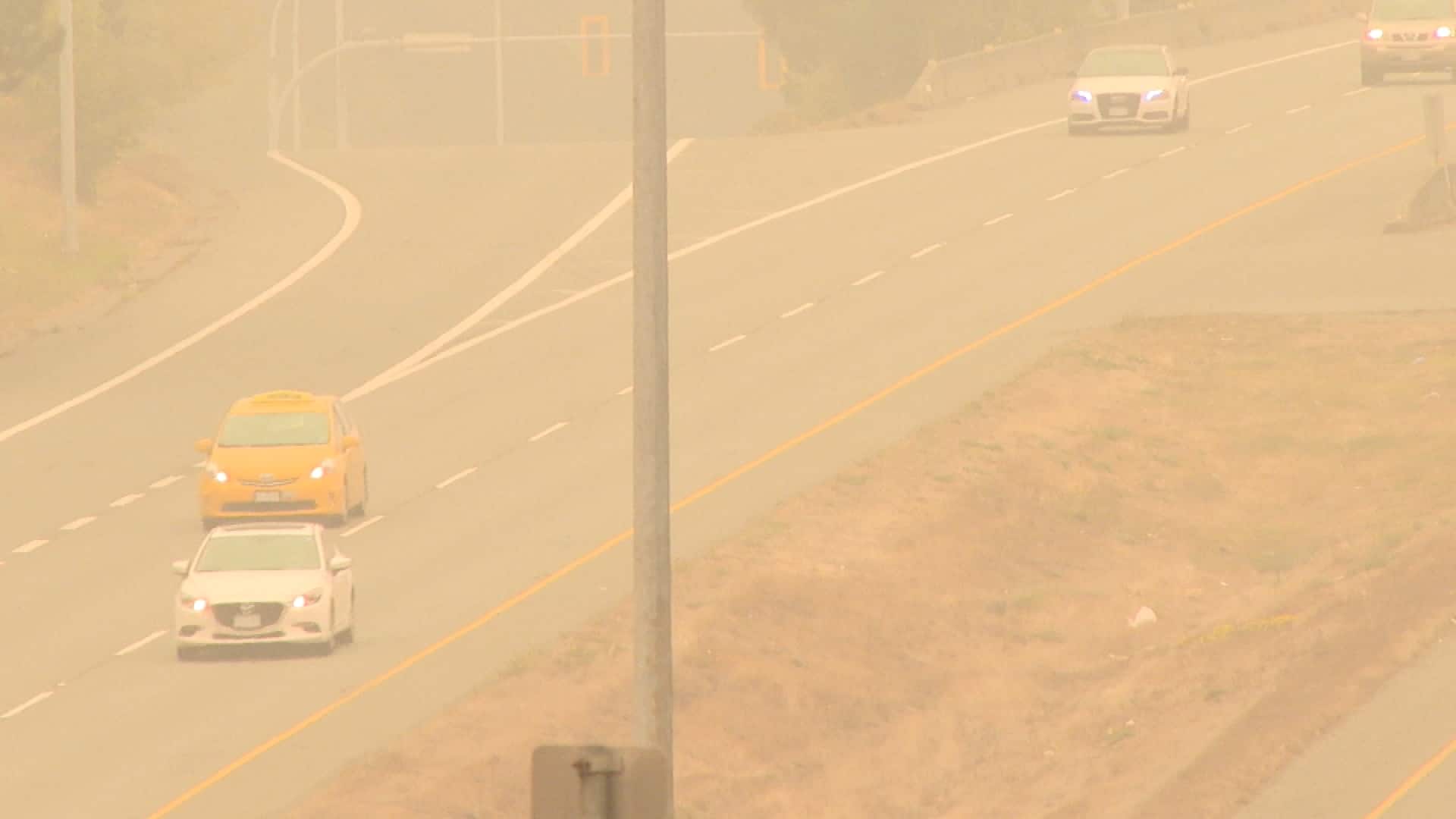 2 months agoVideo
0:49
Smoke from wildfires raging in a number of United States drifted north to B.C. in September 2020, blanketing the Canadian province in a grey haze. 0:49

The data for the smoke event in 2020 is, of course, incomplete as wildfires in the west coast states of the U.S. continue to rage. So far, preliminary data shows Victoria has been most affected since smoke from Washington state and Oregon drifted north. Visibility has been affected for six days, as of Tuesday.

Meteorologists said B.C.'s most recent bout with the smoke is different than previous years for two reasons: first, the smoke has arrived later than usual. Smoke usually stops in B.C. over the month of September as fall weather patterns roll in, bringing cooler temperatures and rainy Pacific storms.

Second, the smoke in B.C. is not from its own fires.

"This has been primarily a U.S.-dominated wildfire season," said Armel Castellan, a warning preparedness meteorologist with Environment Canada. "That's the big difference."

Note: The "days of smoke" figures included in this story are from Environment Canada measurements of the number of hours in a summer day with low visibility — meaning hours during which it was difficult to see more than 9.7 kilometres in the distance. Days where it was smoky, but still easier to see, might not be included in the data.