At least three properties burned down Wednesday night as residents and firefighters near Takysie Lake battled aggressive flames, according to area residents who have defied evacuation orders.

At least three properties burned down Wednesday night as residents and firefighters near Takysie Lake battled aggressive flames, according to area residents who have defied evacuation orders.

The Verdun Mountain fire pushed southeast toward Takysie Lake as crews used heavy equipment to establish a fire guard. Firefighters pulled out of the area due to safety concerns, according to the B.C. Wildfire Service.

Takysie Lake Resort co-owner Rise Johansen, who has defied an evacuation order in an effort to fight off flames, said she fled the area with her husband as the fire moved in. The couple found a clearing just a few kilometres away where they waited it out for several hours. 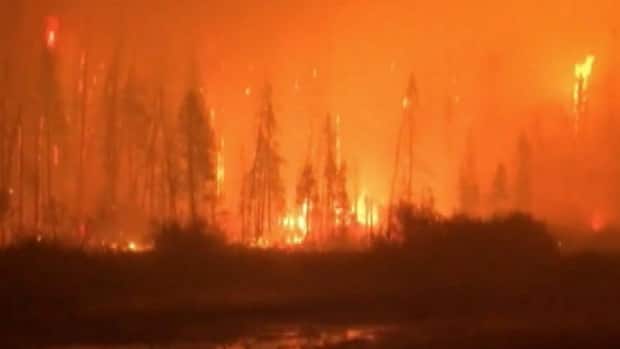 3 years ago
0:22
Despite the efforts of residents that have stayed to help fight the blaze, winds caused the flames to jump over fire guards. 0:22

"We were listening for a big boom, because we have 20,000 litres of fuel on our property," she said.

"We cautiously drove back ... and the first thing we noticed, two of the neighbours homes across the road were totally gone," said Johansen, adding that the homes were just a few hundred metres from her resort.

Residents of the two homes had left after an evacuation order was issued. A third uninhabited house also burned down, according, to Johansen and other residents near the fire.

Shortly after returning to her house, Johansen says the fire began approaching her home. Firefighters returned with a water bomber and began dousing the flames.

"We were happy they were all here," she added. "I'm privileged to have known and met these people because they really work hard to save our stuff."

Johansen says she has reached out to one of the affected homeowners.

Jared Johnson, an archive administrator for the Cheslatta Carrier Nation who also witnessed the fire, said all property owners have been informed.

"It's devastating ... I don't know what [they're] going to do," said Johnson, speaking of one of the families who lost their home. "They were insured, so they might be able to rebuild, but it's going to be a long time before they get back on their feet."

Neither the B.C. Wildfire Service, nor the Bulkley Nechako Regional District have commented on whether any properties have burned down. Wildfire officials say smoke is too thick around the area to determine the full extent of the damage.

The Verdun Mountain fire grew overnight on its eastern flank, and is now over 17,000 hectares. Over 100 firefighters are assigned, as well as 14 helicopters.