But where are you really from? A seemingly simple question, with a complicated answer

'Where are you from?' It's a simple question that's often asked as a way to get to know one another better, or so we assume. But the question can stir up a multitude of emotions from people of colour in Canada.

'The question seems to demand that you account for yourself. It places you outside the nation somehow'

"Where are you from?"

It's a simple question that's often asked as a way to get to know one another better, or so we assume.

But the question can stir up a multitude of emotions from people of colour in Canada.

Ayesha Khan says it's a lot to unpack. She's a fifth-generation Canadian from Langley, B.C., whose family has been in the country since the early 1900s.

"A few times I've responded with, 'I'm Canadian' and they give me this look because the answer is not what they are looking for. And it's defeating cause you feel like you're not enough."

'We're stuck in this periphery'

That feeling of defeat is shared by many who hear the question on a regular basis. For Khan, there are added layers given her family's history: it means she is neither here nor there in terms of her nationality.

"We're stuck in this periphery because we're not white, it's isolating," says Khan.

While the question may seem innocent, there is an underlying power dynamic at the root of it.

University of British Columbia education professor Handel Wright with the Centre for Culture, Identity and Education says the question may not be intended to alienate a person, but it can make people feel like they don't belong.

"The question seems to demand that you account for yourself. It places you outside the nation somehow, and that places the questioner within the nation, and that's why the question is really problematic," said Wright.

Watch Ayesha Khan, Handel Wright and Christie Lee Charles unpack what the question means to them: 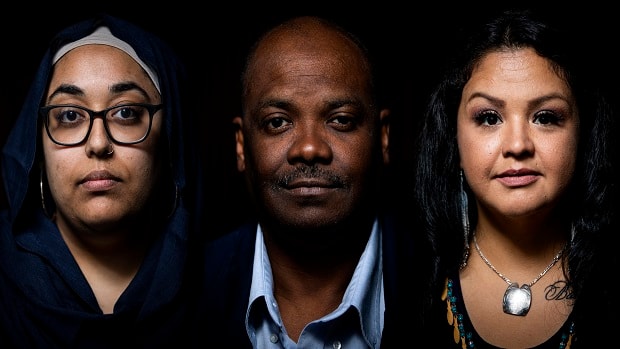 But where are you really from?

2 years agoVideo
2:38
It's a simple question that's often asked as a way to get to know one another better, or so we assume. But the question can stir up a multitude of emotions from people of colour in Canada. 2:38

This doesn't suggest that the person asking the question is racist. But what leads to the question is "deeper than unconscious bias because it's based on the notion of whiteness being normal," said Naila Keleta-Mae, a race relations professor at the University of Waterloo.

"When we talk about history, we talk about two founding fathers, both are white people, English and French. In that we add a third founding peoples, the Indigenous, but as history continues Indigenous fall to the wayside, " said Wright.

"It's ironic for Canada to be so very open about bringing other people into land that is in fact other people's land."

For Christie Lee Charles, Vancouver's poet laureate and an Indigenous woman belonging to Musqueam, it's frustrating to have to repeat herself.

"I'll explain I'm Musqueam and they are surprised. This was our home for thousands of years, I'm really from Vancouver," she said.

Wright said in a country as diverse as Canada, the notion of whiteness challenges how we promote the country as a "cultural mosaic."

The question is received differently depending on how and when it is asked.

"It's OK  to ask what your ethnic background is as long as you're willing to answer it for yourself," said Khan. She suggests building a rapport with someone before posing a question that can be deeply personal and triggering.

Wright says before we get into how to ask the question, we should consider why it is being asked.

"Can we start from a position of 'We all belong here?' We have to get to the point where the question becomes unnecessary."

Nadia Jannif is a producer for CBC Vancouver. You can connect with her on Twitter @njannif.