What the heck is that slimy goop in Stanley Park's Lost Lagoon?

Did you know that Vancouver has its very own blob monster? That's the less-than-scientific name for the slimy and surprisingly firm jelly creatures at the Lost Lagoon. 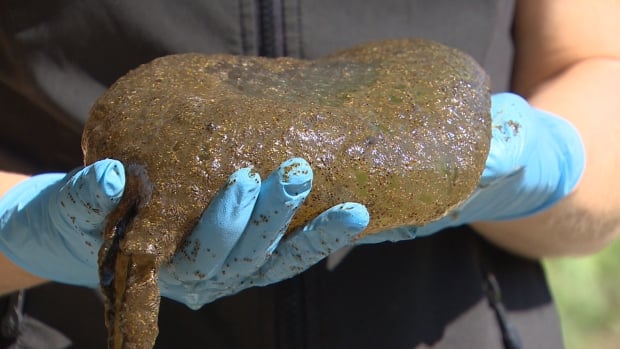 3 years ago
1:22
That's the less-than-scientific name for the slimy and surprisingly firm jelly creatures at the Lost Lagoon 1:22

Did you know that Vancouver has its very own blob monster?

That's the less-than-scientific name for the slimy and surprisingly firm jelly creatures at Lost Lagoon in Stanley Park.

"It's sort of like a week-old Jell-O," said Celina Starnes with the Stanley Park Ecology Society. "And it's kind of gross."

"Go ahead, poke it," Starnes says to the crowds that come to look at the slime.

But before you think this is some strange alien creature invading the park, Starnes​ explains that Pectinatella magnifica or bryozoan has been around for ages.

The blobs are hard to spot because they are camouflaged, and it's quite likely that most people are only seeing them just now because Lost Lagoon has low water levels, which make the gelatinous mass more visible.

Each colony is made up of tiny animals that are genetic clones of each other, and secrete a goo that binds them together, sometimes around a branch or rock.

There's a certain amount of evolutionary sense to that: A single organism on its own is prey for larger animals, but if they stick together they're less likely to be eaten.

Meanwhile, the tiny dots are the next generation of baby bryozoan, and when fish or birds eat them, they spread it to other fresh water ponds.

"If had a microscope, you'd see these tiny fingers that come out and grab food ... mostly algae," Starnes said.

While these animals have been around for ages — probably not all that different from the first animals in history that started off as microscopic blobs — Starnes said they haven't changed all that much.

"They just plop down in one place and that's pretty much it."