Rally began at B.C. Supreme Court where a port protest injunction was filed

About 200 people first gathered Wednesday morning at B.C. Supreme Court on Smithe Street, where lawyers were filing a challenge to an injunction that ordered dozens of protesters to stop blockading port entrances.

The protesters, some of whom were arrested at port blockades earlier in the week, held signs, drummed, chanted and made speeches.

Protester Herb Varley said they didn't think they were going to win the challenge to the injunction but were fighting for the right to peacefully assemble.

"What we're doing here today is we're showing we're not intimidated," he said.

"To have assembly, to demonstrate like this, this is the only way positive change has ever been made."

At 11 a.m PT, the group moved off the sidewalk and into the streets, marching to the corporate headquarters of Coastal GasLink at 609 Granville St. before moving to block the Granville Bridge in both directions.

Traffic was blocked for at least two hours. Protesters left the bridge just before 3 p.m. PT.

Organizers said more protests could be expected, with another one planned as early as Thursday morning in Kitsilano. 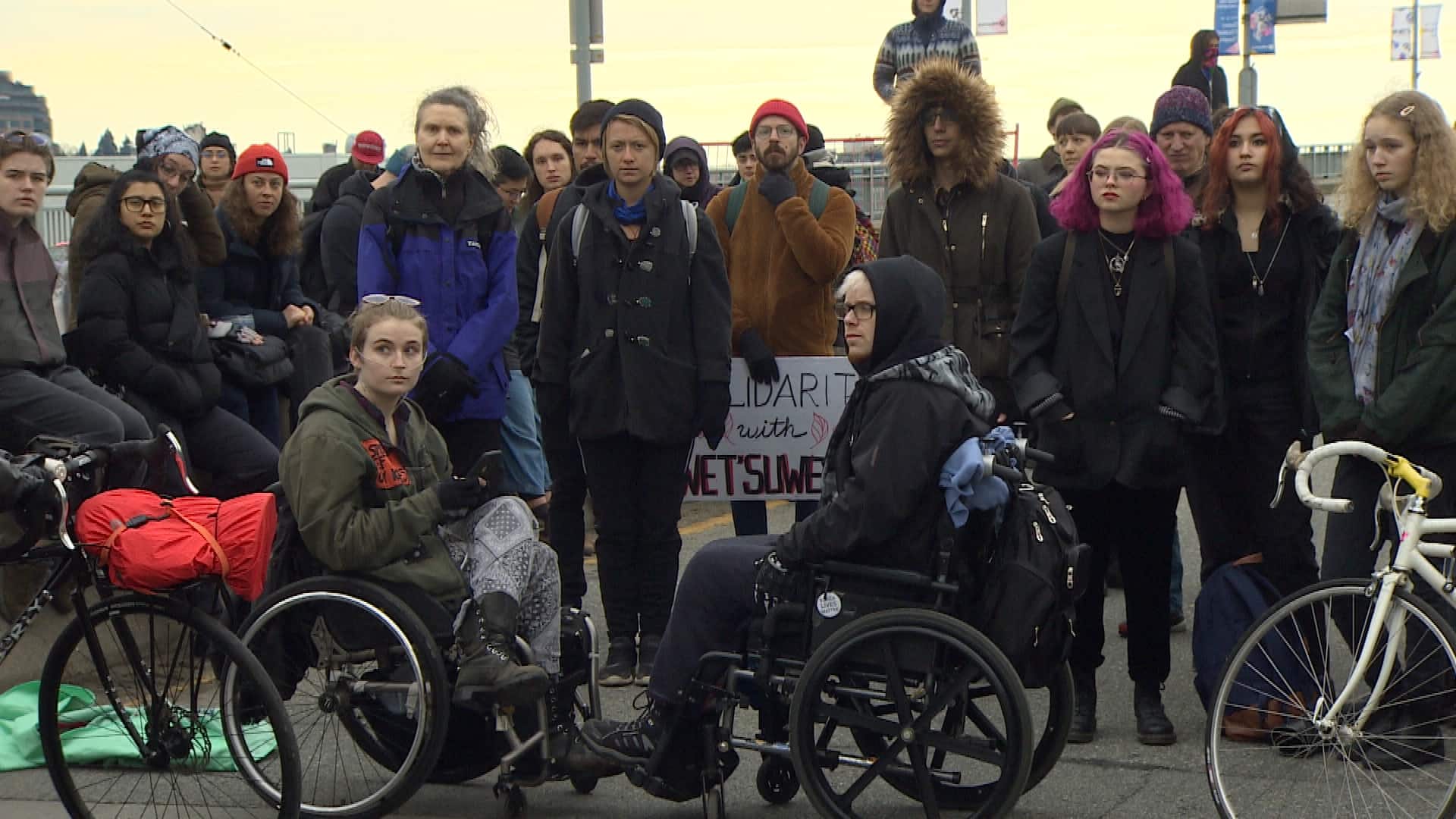 Some protesters, like Catherine Louis, said they'll continue to participate until their voices are heard.

"So I think this case and what we're doing here now sets the precedent for what's going on and how far the First Nations in Canada are willing to go for our lands and for our livelihood."

Watch as protesters take over the streets after leaving the Smithe Street courthouse: 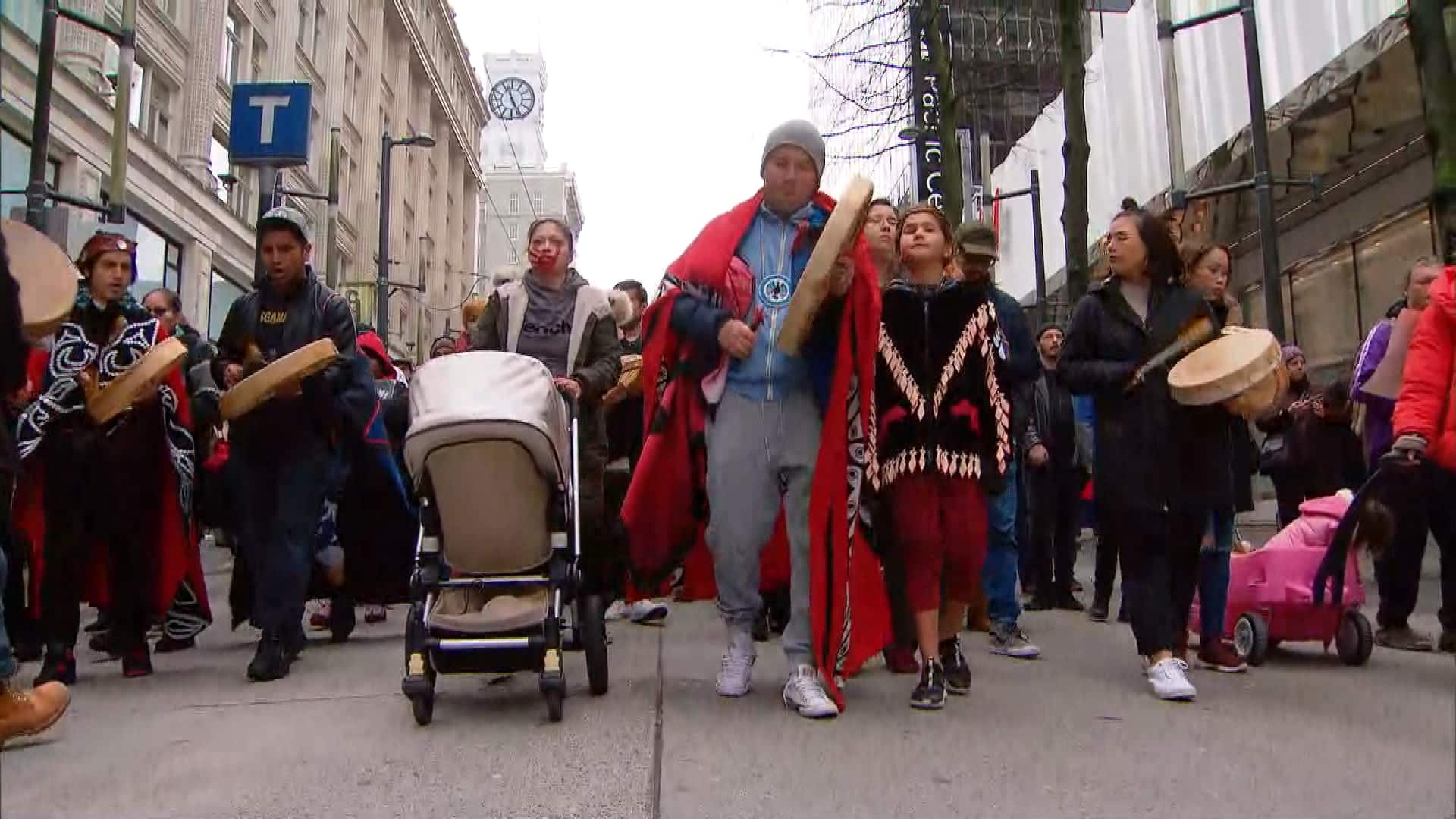 Wet'suwet'en supporters block traffic as they march through downtown Vancouver

1 year ago
0:34
About 200 people held signs, drummed, and chanted, including some who had been arrested at the port blockades earlier in the week. 0:34

Wet'suwet'en hereditary leaders are fighting CGL's construction of a natural gas pipeline through their traditional territory in northern B.C.

The $6.6 billion dollar project runs 670 kilometres from Dawson Creek to the LNG Canada liquefaction plant that is under construction near Kitimat on B.C.'s northern coast.

Over the weekend, protesters blocked three port entrances in Vancouver and one in Delta, B.C., in solidarity with the chiefs.

Police arrested 43 demonstrators at the Port of Vancouver on Monday morning as they enforced an injunction granted to the Vancouver Fraser Port Authority. Fourteen protesters were arrested at the Delta port.

Wet'suwet'en supporters say they're working with lawyers to challenge the B.C. Supreme Court injunction, which ordered them to leave the port authority's lands and stop blockading the port's access points.

Supporters say they didn't know the port authority was seeking an injunction and they did not have the chance to be heard in court.

Danielle Jang, a spokesperson for the port authority, said Sunday the disruption to port operations had a "significant impact on Canadians across the country."

"While we respect the right to a peaceful protest ... we have been forced to take steps through a court order to restore port operations," Jang said in a written statement.

Earlier Wednesday, demonstrators moved out of a major Vancouver intersection following a protest that began the preceding afternoon and ran overnight.

The final demonstrators left the intersection of Cambie and Broadway by 6:30 a.m. PT and police re-opened the road before rush hour.

Several people at the overnight rally said they would attend the court announcement.