A 24-hour period of freezing rain across the South Coast of B.C. has led to the closure of every highway heading into the Lower Mainland, stranding hundreds of drivers.

Cars stuck on Coquihalla after freezing rain, which also caused outages to thousands of BC Hydro customers 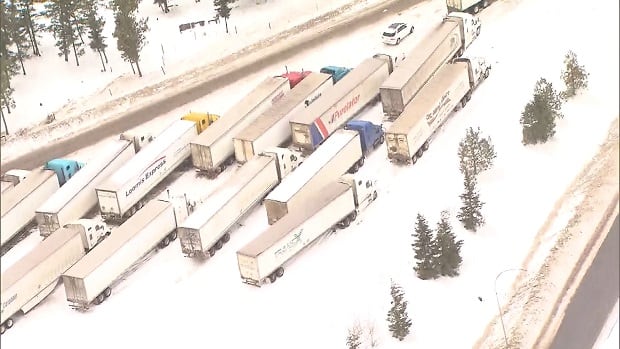 A bird's-eye view of Highway 5 on Friday morning

4 years agoVideo
0:43
The Coquihalla was closed Thursday afternoon due to hazardous icy conditions 0:43

A 24-hour period of freezing rain across the south coast of B.C. led to the closure of every highway heading into the Lower Mainland — stranding hundreds of drivers — as well as blackouts across the region.

The rain began Wednesday night and carried into Thursday morning, blanketing the area with slick sheets of ice. 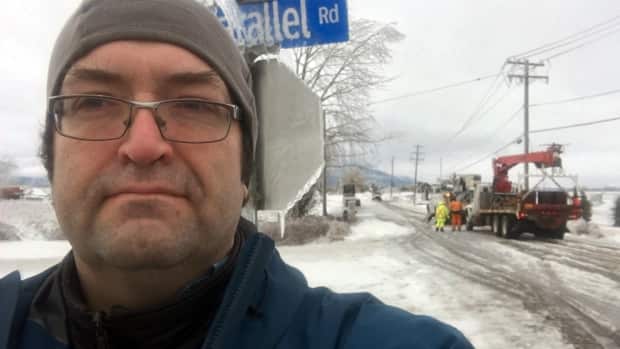 By Thursday afternoon, Highways 1, 3, 5 and 99 had all shut down due to the dangerous conditions. Many parts of those highways remained closed on Friday morning.

North Vancouver's Joanna Hirner and her family had been stuck on Highway 5 — known as the Coquihalla — since 8 p.m. PT on Thursday. They were trying to get to Big White Ski Resort, near Kelowna.

"We did get some sleep last night. Just trying to make the best of it," she told CBC News. "We're lucky that we were going skiing, so we've got lots of warm clothes and we're OK."

She said she's been impressed by the attitudes of her daughters, aged seven and nine.

"They've been really patient. They've got books and toys … we'll just tough it out."

Marcus Kessler, a delivery driver, was heading to Kamloops via Highway 1 Thursday night, but turned back at Hope.

"The roads, they're treacherous … We have to be safe. If we're not safe, we're going to get stuck," he said.

As for anyone who was trapped on the road, Kessler said he felt "really sorry for them."

The Coquihalla was closed just before noon Thursday due to multiple crashes.

It was reopened to drivers around 4 p.m. that day, but closed once again at 6 p.m., leaving many people stranded. They spent the night in their vehicles.

"The road is literally a sheet of ice. To get out of the car and walk is super treacherous," said Jesse Wheeler, who was stuck on Highway 5, about 25 kilometres south of Merritt.

Heather Beaty, who was also stuck near Merritt with three friends, was making her monthly trip to Kamloops Thursday to play with the city orchestra.

She wondered why the highway was closed and reopened, only to be closed again.

"We are quite frustrated they would open the highway and tell us we could go, and then close it within an hour after doing that, letting thousands of people in," Beaty said. 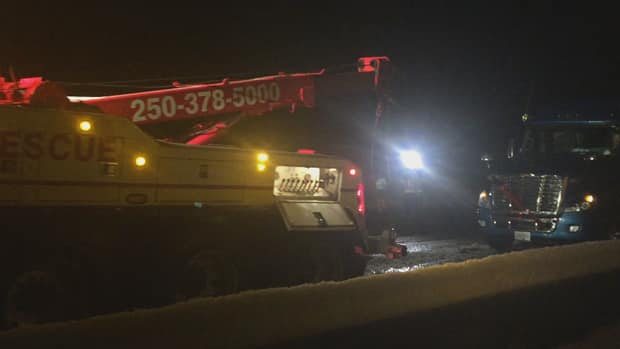 4 years agoVideo
1:33
All highways linking the Lower Mainland to the rest of B.C. are closed 1:33

Mike Lorimer, the transportation ministry's regional director for the southern Interior, said the decision was made because the forecast only called for a bit of seasonal snow and rain.

"We felt comfortable getting that road open," he explained on Friday.

Lorimer said the ministry would've made a different decision had it known about the freezing rain that was coming.

"[The forecast] didn't have those treacherous conditions when we made the decision to open … If it had, we wouldn't have made that [choice]."

Sean Buker also was trapped on the highway overnight Thursday. He told CBC that conditions were "pathetic" and cold.

Weather warnings for the area have ended, but ​Environment Canada said 10 more centimetres of snow are expected for the pass on Friday.

The Coquihalla reopened Friday around 2 p.m. PT. Drivers were asked to lower speeds to 80 km/h as traffic resumed.

The weather also caused power outages that affected thousands of BC Hydro customers.

As of Friday afternoon, just over 10,000 people concentrated in the Lower Mainland and Vancouver Island are without power.

BC Hydro said all available resources are out in force repairing the widespread damage caused by the "multi-day weather event" and said some customers could experience "lengthy and/or multiple outages."

With files from Gian-Paolo Mendoza