The urban park, founded on unceded territory, was created 30 years ago amid protest from the Musqueam.

The park, founded on unceded territory, was created 30 years ago amid protest from the Musqueam 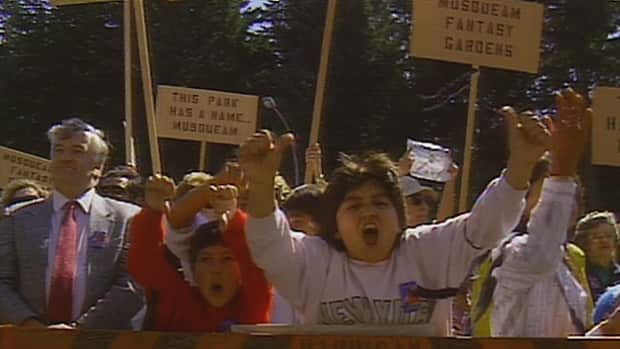 2 years ago
2:28
In this story from April 23, 1989, CBC reporter Bill Amos covers the protest of the creation of Pacific Spirit Regional Park. 2:28

At the time, celebrations were organized for what was dubbed one of the largest urban parks in Canada. Premier Bill Vander Zalm and other dignitaries were present for the official handover.

But for the Musqueam nation, on whose ancestral territories the university had taken up residence and who had competing claims for the park, it was a bitter day.

In fact, three years earlier, the band had submitted a land claim describing their historic use of the area.

In the 1984 document, members describe how it was becoming difficult for the Musqueam to conduct spiritual ceremonies amid joggers and other park users.

'Where are your papers?'

Gail Sparrow, 67, says it was one of the first protests she had ever taken part in.

"We really didn't know what was going on up there," Sparrow recalled.

"[The elders] got the trucks and the cars and the people rounded up and they put the chairs out there. They brought the drums and they were in the traditional wear and they got the speakers and then they just went at it with Mr. Vander Zalm."

Calling the event the Vander "Slam," Sparrow said the speakers brought attention to the fact the land was unceded Musqueam territory.

Park supporters responded to the Musqueam protesters by asking, "Where are your papers?"

"And one lady asked, 'Where are your papers?' [back at them]," Sparrow recalled.

"Open up the earth. Dig down. You'll find village remnants. Our people's bones are in there. That's who owned the land."

Sparrow, who later became a Musqueam chief, said the protest inspired her to take a closer look at the history of the land.

"Traditionally we don't think of it as Pacific Spirit Park. It's Musqueam land. It's a Musqueam village site. We occupy it. We live there. We never moved from there. We were relocated to reserve allotments from all these areas and pushed into the 400 acres that we have."

Since the creation of the park, Sparrow says there have been positive changes to the relationship between the Musqueam and the province.

In 2006, the Musqueam signed a memorandum of understanding with the University of British Columbia.

Properties — like the university golf course and 20 hectares of land in Pacific Spirit Park — were returned to the Musqueam under a 2008 land settlement with the province.

"That is a result of those people coming and protesting and speaking out and reclaiming the ownership of the land," she said.

"[The elders] were strong and they stood and claimed … We're still here. We never left."