A century ago, a British war bride sailed to Canada. Now her granddaughter shares her story

The granddaughter of a First World War bride is urging families to share the stories of the women who followed soldiers back to Canada 100 years ago.

"The ship was making excellent speed...in the distance we saw a huge iceberg. It looked like some great building with a tower to it. We passed not very far from it. A gentleman standing there nearby gave us his eyeglasses or rather spyglass."

When Annette Fulford read these words from her grandmother, she was instantly captivated.

Grace Clark was a war bride.

She wrote a 68-page letter on the Melita as she journeyed from England with her new husband to Canada in September 1919.

Clark was one of thousands of young European women who met and married Canadian servicemen during the First World War, which ended on Nov. 11, 1918.

Canada's military past is honoured annually on Remembrance Day, as a way of keeping alive the sacrifices and valour of soldiers who fought overseas. But the experiences of war brides who uprooted their lives to move to Canada are much less understood, and Fulford wants to change that — lest we forget.

"There are still so many stories out there that need to be told," she said.

Her grandparents had a whirlwind romance. Hugh Clark, a Saskatchewan farmer, was conscripted in 1918 and went to England. Grace Gibson was a music teacher in England when they met in January 1919. They were married three months later.

They sailed to Canada nearly a year after the war and settled in Hugh's hometown of Storthoaks, Sask. They raised four children and were married for 48 years.

But in 1919, when Grace was writing the letter, she was a 21-year-old who was leaving her home in England for the first time.

Grace died when Fulford was five, and Fulford was fascinated by the letter because it offers a unique window into the journey of a war bride.

"We had a sad burial at sea. A blind officer on board lost his three-month-old baby. It died the day before. The minister on board conducted the burial and many hearts were touched. The mother and father were there, and greatly upset. It was all the more sad, seeing the man was blind."

Listen to an excerpt of Clark's letter. 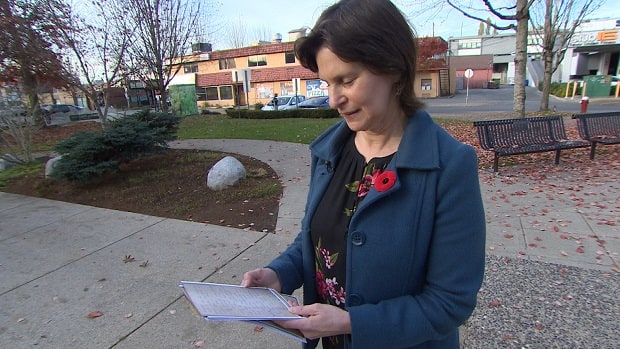 12 months ago
0:30
Annette Fulford reads an excerpt of a letter written by her grandmother, Grace Clark, as she sailed from Britain to her new home in Canada. 0:30

A recent survey by Leger Marketing for Ancestry.ca found 57 per cent of Canadians are unfamiliar with war brides or what the term means, despite the women's important role in shaping Canadian identity.

"They sort of firmed up those ties between Britain and Canada ... and there are a lot of people in Canada who can claim a grandmother or great-grandmother as a war bride," said Glenn Wright, a retired military archivist with Library and Archives Canada.

"Their lives were pretty tough," says Ancestry family historian Lesley Anderson. "They were in a new country at a time of devastating loss and they had only their husbands to rely on."

Tens of thousands of women

Since then, the self-taught genealogist from Maple Ridge, B.C., has become a keen researcher of First World War brides and regularly gives talks on the subject. Fulford says the majority of those war brides immigrated to Canada in 1919.

Veterans Affairs says approximately 54,000 relatives accompanied returning troops to Canada after the First World War, but it's unclear how many of those were women, children or other relatives.

"There are heaps of young children and babies, and the poor mothers are having a trying time of it trying to nurse when they should be lying down. However from what I see the Canadian soldiers are very attentive to their sick wives and do their share of nursing."

She believes the lack of in-depth research on First World War brides is partially because the term wasn't in use until the Second World War.

Wright concurs. He said there were more marriages in the Second World War because Canadians were stationed in Britain longer before being deployed to continental Europe.

He added that the Canadian government was far more organized after the Second World War in bringing back the war brides and supporting them once they arrived in Canada — lessons learned from the earlier immigration.

"There was a lot of culture shock for these women, because it was a completely new way of life for a lot of them. These were city girls from London who had never been on farms," Fulford said.

"It was hard for my grandmother to come to Canada because she was from a middle-class family. She was used to, you know, certain luxuries that were not available on the farm," she said.

"And of course the isolation. ... The farms are quite large in Canada, so the nearest neighbour might be 10 miles away."

But if Grace showed any apprehension about moving to Canada, she didn't express it as they approached land.

"This is the best part of the journey. There is no wind at all and everything is so calm. His majesty the sun is shining to 'beat the band.' You see I'm Canadian already now that we're at God's land.… We can see a train now. Hugh nearly jumped overboard in his glee."

Fulford had to piece together large chunks of her grandmother's life by poring through family records and photos.

"She was a soft-spoken, elderly woman. I can't even remember if she had a British accent."

But the letter offered a window into her life and personality.

"She seemed very enthusiastic and youthful, but also reserved because she didn't write about herself really. She mostly wrote about the world around her."

Hugh was a boxer and fought in a few exhibition matches on the ship.

Grace wasn't keen on the fighting, but she made an exception for the prize money in one case.

"Hugh said he was going to spend £1 on souvenirs. For me. This is the conditions on which I let him box. He bought me a souvenir spoon to the ship and also a large picture of the Melita which we shall get framed when we get home."

The souvenir spoon is now a cherished family heirloom.

But there are still many gaps in Fulford's knowledge.

"I'd like to know exactly how she met my grandfather and what she was doing during the war, whether she volunteered for anything or whether it was just teaching music to the children."

Fulford is concerned the war brides' stories will soon be lost, so she encourages others to write them down.

"Write down your family histories and tell the stories of their war brides, so that people have access to these stories and we can learn more about the war brides of the First World War."

Tamara Baluja is a producer for CBC Vancouver.