A man in his 70s left his care facility unnoticed and wandered onto the tracks west of the White Rock Beach pier Saturday night. 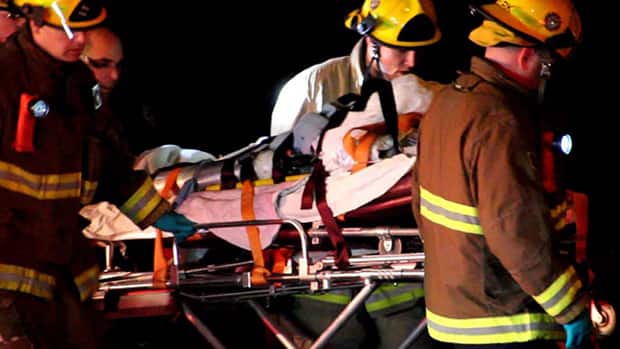 7 years ago
2:15
A man with dementia was injured after wandering from his care home and onto the tracks near the beach Saturday night 2:15

An elderly man with dementia was hit and seriously injured by a train after wandering away from his care facility in Metro Vancouver Saturday night.

The man was struck by a northbound Burlington Northern Santa Fe freight train west of the pier at White Rock Beach at around 8 p.m. PT.

Police said the train engineer sounded the warning horn, but the man continued to walk toward the train.

An air ambulance helicopter was brought in to fly the man to hospital, where he remains Sunday with undetermined head injuries.

Police closed the 14500 block of Marine Drive between High Street and Bay Street Saturday night to investigate and document the scene, which is approximately one kilometre away from the man's residence.

Police said the man was not reported missing from his care home until around 9 p.m. PT, roughly an hour after he was struck.

Stephen Bennett, executive director of Evergreen Baptist Care Home, confirmed the man had been living at the facility.

"This individual had been living in one of our care units, and wandered away from our facility earlier that evening," Bennett said in a written statement sent to CBC News.

"Our primary concern is for the well-being of this individual, and their family. Our understanding is that the resident is currently recovering well in hospital, and we are hopeful for a speedy recovery."