As a breast cancer researcher, Dr. Samuel Aparicio never thought he would owe a 'thank you' to the gaming industry.

But it is indeed 'gamers' that have lent a hand to a breakthrough in the type of research he's been conducting for decades.

Dr. Aparicio, as part of a team of 10 research groups from around the world, has developed virtual reality 3D imaging of real breast cancer tumours. 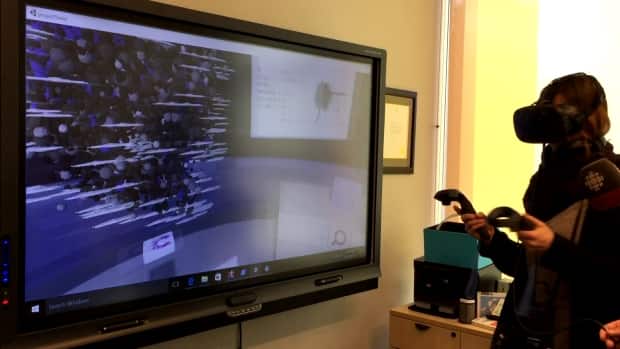 What a cancer tumour looks like in virtual reality

It starts with virtual reality googles, the same used in the gaming industry.

"We've adapted it, so that we can take representations of tumours that we're studying and look at every single cell," said Dr. Aparicio.

The microscopic but deadly mass is blown up to be millions of times larger, complete with the ability to walk not only on the surface, but inside individual cells.

"Throughout my career, I've witnessed things happening technologically ... that I never thought I would witness in my professional life."

The 3D scan is not a model of a breast cancer tumour. It's an actual tumour, converted to a virtual reality representation from MRI and CAT scan imaging.

All cells are shown in black and white, until the researchers want to look at a specific set of cells. They then have the ability to colour-code everything from macrophages to blood cells.

Dr. Aparicio says having new and more detailed ways to look at the tumour will allow scientists to develop new ways to diagnose and treat the disease.

Dr. Aparicio says he constantly gets asked how this technology will advance cancer research.

"We have some fundamental goals," he said, "to predict the way that cancers will behave in individuals, and also combine different treatments in order to prevent cancers from changing over time."

While he is inside the cell, any number of the other researchers can enter the same cell and look at the same up-close 3D data.

"We all think in different ways," he explained.

It also just allows us to collaborate. If someone says, 'I'm talking about this,' it's much easier to actually jump in there and see exactly what they mean."

It's because of Dr. Aparicio's own history that the team is focusing on breast cancer in particular.

His hope to target therapy-resistant cells.

Similar to a superbug, some cancers become resistant to treatments. He believes this technology can help.

"We're trying to use these different forms of technology to address that question: how do we stop tumours becoming resistant to drugs?"

The award is worth $33 million from Cancer Research U.K. It's one of the largest science-research awards in the world.

Dr. Aparicio and an international team of 10 investigator groups will use the funding to continue developing the VR scans and its practical application in the areas of diagnosis and treatment.

The team was meant to only conceptualize the idea, before submitting it to the award process. Instead, they began working on it right away.

"When we first made the proposal, we all got so excited about the work we just started working on it anyway, before the grant really started," he said. "It was that good."