One of Port Moody's two mayoral candidates is in hot water after a 2014 video of him asking a homeless man to shotgun a beer with him in exchange for a sandwich surfaced weeks before the election.

'It’s something that doesn’t paint me in a good light,' says Rob Vagramov

One of Port Moody's two mayoral candidates is in hot water after a 2014 video of him asking a homeless man to shotgun a beer in exchange for a sandwich surfaced weeks before the election.

"I wouldn't have made it today, that's for sure," said Rob Vagramov, 26, who currently holds a seat on Port Moody city council.

In the video, shot in downtown Vancouver, Vagramov tells the camera he's partaking in a "random act of kindness challenge," which he says was a social media trend at the time.

He said at the time there was also a popular "beer chugging" challenge, in which people challenged their friends to drink a beer on video, and he decided to combine the two.

"I was pretty excited to get f--ked up, to be honest with you, until I realized it was a random act of kindness nomination," he says into the camera. "So let's see if we can't do both and make somebody's day."

The video shows him approaching a homeless man and asking him if he's hungry. Vagramov then asks the man if he's OK with being filmed.

"On one condition though," he tells the man. "Do you know how to shotgun a beer?"

The two men both drink a beer, then Vagramov hands him a sandwich. 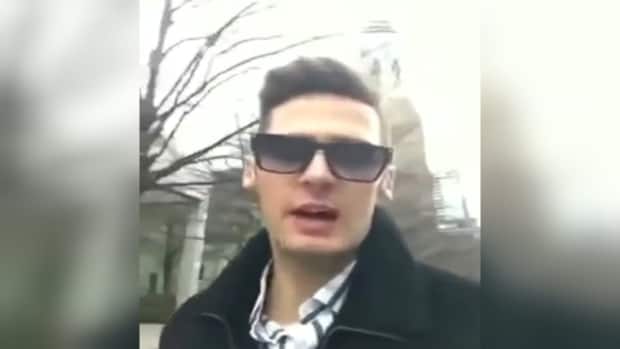 2 years ago
1:20
A Port Moody mayoral candidate is in hot water after a 2014 video of him asking a homeless man to shotgun a beer in exchange for a sandwich surfaced just weeks before the election. 1:20

'An attempt at a smear campaign'

"I watch it and it's always cringey to watch yourself a while in the past," said Vagramov. "It's something that doesn't paint me in a good light, five years ago almost."

He said the video was online when he ran for city council later in 2014, but it was not raised as an issue then.

"We had a bit of a tip that this was going to be thrown out there as sort of an attempt at a smear campaign. It's obviously political in its timing."

Vagramov also offered an apology to the man in the video.

"I'm sorry that this is being reposted everywhere. This was supposed to just be for my friends," he said.

Vagramov said as a council member he sat on a city task force to tackle homelessness in the Tri-Cities, which changed his perspective on homelessness.

With files from Matt Humphrey