Federal fishery officials are investigating after a video was posted to Facebook featuring a man throwing a small explosive toward a group of sea lions in the Strait of Georgia.

Federal fishery officials are investigating after a video was posted to Facebook featuring a man throwing a small explosive toward a group of sea lions in the Strait of Georgia.

The clip displays commercial fisherman, Allan Marsden lighting the fuse of a 'bear banger' — a small explosive device used to scare bears or other animals — before tossing it into the water.

It was posted on Tuesday evening to the Pacific Balance Pinniped Society Facebook page, which describes itself as a group of British Columbians who advocate for monitoring and population management of seals and sea lions.

Watch commercial fisherman Allan Marsden throw a 'bear banger' off his vessel and into a crowd of sea lions, and the reaction of the animals to the small explosive device. 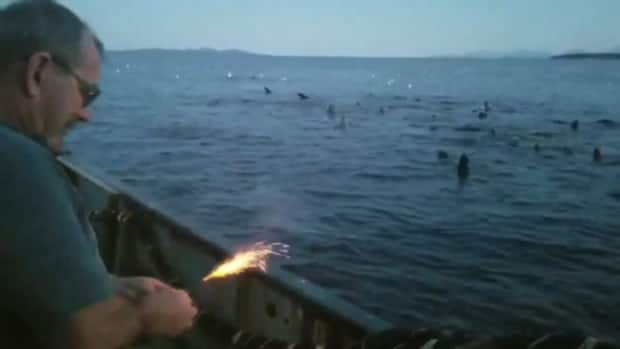 2 years ago
0:37
Commercial fisherman Allan Marsden is pictured throwing a ‘bear banger’ into a group of sea lions in the Strait of Georgia. 0:37

A danger to the fishing industry?

Marsden says he used the bear banger to disperse the sea lions — not to kill them.

"They are here, we're trying to make a living, and we're just trying to figure out a way to deal with both issues."

Marsden said he took part in the video to educate the public that sea lions pose a threat to the fishing industry.

The fisherman said he was in the area, on the water looking for herring samples to check the percentage of roe in the fish, but the sea lions were driving the herring away from the surface.

Marsden said the explosive was needed to ensure the safety of fishermen, adding he was once injured by a sea lion that approached his boat.

"I'm lucky that I'm not in a wheelchair or worse, dragged overboard and drowned by the sea lion," Marsden said.

The video drew mixed reaction on Facebook. Some showed support for Marsden's action, saying it sheds light on how sea lions can interfere with fishing activities.

Charges may be laid

In a statement, the Department of Fisheries and Oceans said it is reviewing the incident, noting it's against federal regulations to disturb, harm or kill marine mammals.

"Charges may be laid," the statement said. The DFO statement noted it is illegal to disturb or harm marine mammals by any means, including the use of acoustic deterrents.

Andrew Trites, a marine mammal researcher at the University of British Columbia, said he was shocked by the cruelty of the incident.

He said the bear bangers are meant to be used at some distance from the animals, just to scare them off, but not to harm them.

"I know I've heard them say 'well it doesn't hurt the animal.' Well if that's the case I would challenge them to hold that stick in their hand, light it and let's film it," said Trites.

With files from Chek News and Joel Ballard