A Canadian veteran, who survived a vicious axe attack in Afghanistan nine years ago, has taken his first public steps using an exoskeleton customized by SFU researchers. 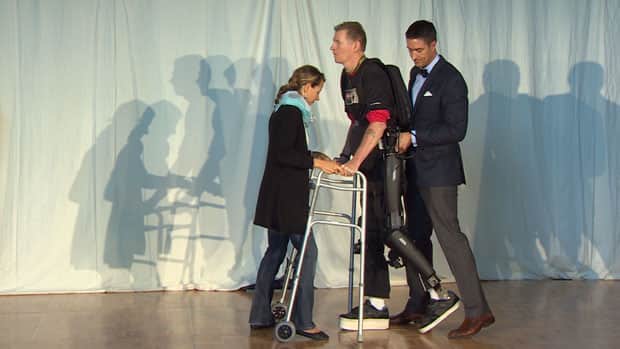 A former Canadian soldier, who survived a vicious axe attack in Afghanistan nine years ago, has taken his first public steps using an exoskeleton customized by Simon Fraser University researchers.

Capt. Trevor Greene was attacked by an axe-wielding teenager while meeting with elders in an Afghan village in 2006. The blow split his skull open and left the six foot four soldier unable to walk or talk.

But with the help of brain scientists from SFU, he's made remarkable progress. On Thursday, he used his exoskeleton to walk across the stage at their Surrey campus and appeal for a new state of the art facility for veterans.

"It's amazing, I call it the Iron Man Suit," said Greene. "You watch movies like Iron Man and it's just Hollywood, but this is real."

"My hope is that it'll spark my muscle memory from the millions of footsteps that I took up till now."

Although exoskeletons have been used for patients with spinal injuries, Greene's doctors say he's the first brain-injured person to walk using the device.

"It's like when you move a doll's arms and legs...That's what it feels like on my legs," said Greene. "To be doing that independent movement, even under power, is fabulous, because it's been nine years since I walked properly."

Dr. Carolyn Sparrey, a professor in SFU's School of Mechatronic Systems Engineering, says Greene is the best possible subject she could have.

"He is going to push himself and work as hard as he possibly can," said Sparrey. "What we're hoping is that it does start to drive some of the connections back from his legs, back to his brain and back again.

"So we get that neuroplasticity, that change in the brain structure, that helps him recover the function."

Greene's ambition is to recover enough function to make it to Everest Base Camp. He even has a tattoo of the Himalayas on his arm.

Bringing veterans and scientists together

In turn, his remarkable rehabilitation has inspired the RCL in Surrey to start a recovery of its own; they're hoping to transform their aging branch into a new, state-of-the-art facility.

Marc Tremblay, B.C. President, says he hopes the local politicians and business leaders who witnessed Greene walk will contribute to the new complex, which would bring veterans, doctors and scientists together.

"We do have veterans right across the country that need access to the care that they deserve for their service," said Tremblay.

Greene sees himself as lucky, despite his devastating injury.

"The right people have shown up at the right time and I think that other guys haven't been as fortunate."

That's why he's happy to help.