The devastation in Japan from Thursday's earthquake is raising questions about the damage Vancouver might sustain in a similar event. 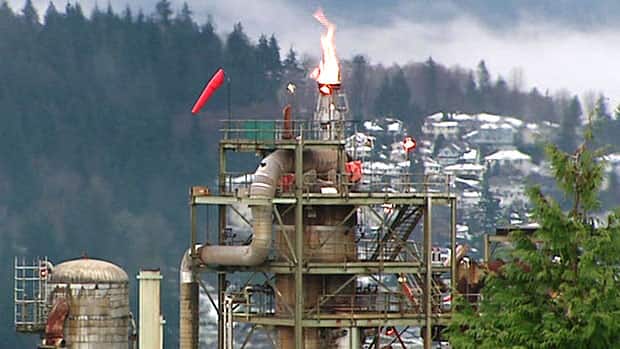 10 years ago
2:09
The CBC's Eric Rankin reports on which of B.C.'s industrial sites are the most vulnerable to earthquakes and tsunamis like those in Japan 2:09

The devastation in Japan from Thursday's earthquake is raising questions about the damage Vancouver might sustain in a similar event.

B.C. has no nuclear reactors, but there are vulnerable industrial sites, especially along Burrard Inlet, where a chlorine plant in North Vancouver and the Chevron refinery and storage tanks in Burnaby pose real hazards after an earthquake or large tsunami.   Earlier this month, a leak at the chlorine plant owned by Canexus Chemical Canada LP sent four workers to hospital.

The plant has been red-flagged as a potential earthquake hazard, because any leak of chlorine gas could cut off North Vancouver evacuation routes.

The biggest danger comes not from a massive offshore subduction quake such as Japan's and the resulting tsunami, but from more common smaller quakes, according to Simon Fraser University geologist John Clague.

Clague said a major subduction earthquake off the coast of Vancouver Island would not likely produce a large tsunami in the Strait of Georgia to threaten Vancouver.

"The more extreme scenario is when you get … a magnitude seven earthquake that has an epicentre close to Vancouver," said Clague. "That would be my worst-case nightmare."

A local quake could cause a landslide that pushes a high wave of water through local fjords like Indian Arm, destroying structures well above the high-tide line.

The shaking damage that such an earthquake could produce is a more likely threat, not only to homes, but also to communications and transportation, he said.

"We're vulnerable in Vancouver we're at high risk because we've got these critical links in our transportation system — the bridges, the Deas Island tunnel. We cannot afford to have those go in the event of an earthquake."

Clague is also concerned about the domino effect of an earthquake that is now evident in Japan — homes destroyed, along with communication and transportation links, power outages, food and water shortages, and toxic environmental threats.

The combination can be overwhelming for an urban population.

Clague said some planning has been done, but there has never been comprehensive study of the effects of a major earthquake in the Lower Mainland.

He said the varying geology of the region means some areas would respond very differently from others to a severe shaking and studies could help predict the outcome in advance at a fraction of the cost of cleaning up after a major tremor.

"I'm really mortified that governments won't spend those resources to do it," Clague said.