Staff at The Vancouver Sun and The Province newspapers have been told to expect another round of layoffs because the current business is unsustainable. 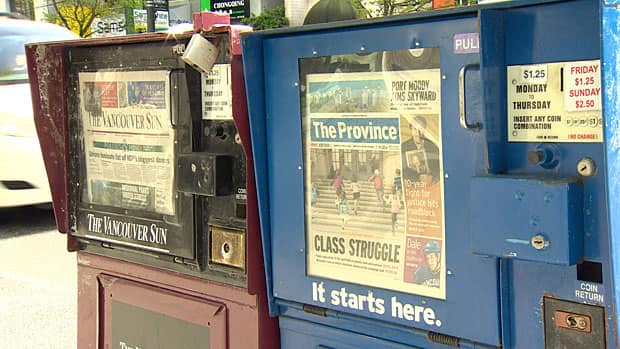 7 years ago
2:21
Management is saying their business model is unsustainable 2:21

Staff at The Vancouver Sun and The Province newspapers have been told to expect another round of layoffs because the current business is unsustainable.

In a message to staff issued on Wednesday, Pacific Newspaper Group president and publisher Gordon Fisher said the papers are facing alarming declines in revenue from print advertising and if the trend continues the businesses are unsustainable.

"I would be less than honest if I failed to point out that, as an example, our productions costs are dramatically higher than those of our peers. As one small but enlightening example, we are not in the insert business because it is impossible to profitably compete due to our costs," said Fisher.

Fisher said a voluntary staff reduction program will be followed by the layoff an unspecified number of employees .

"These are not easy decisions and we do recognize that such programs mean we will lose senior employees with valuable experience as well as more junior staff with future potential."

Fisher, a former managing editor for the Vancouver Sun, was appointed president of Pacific Newspaper Group in January. PNG is owned by Postmedia Network.

Fournier worked as a reporter at the Province for 37 years before taking a voluntary buyout one year ago.

Her advice to her former colleagues isn't optimistic: "If the time is right, make the jump," she said. "And if you don't make the jump, you're going to be pushed."

Click below to see a replay of our live chat on this story.
CBC's Journalistic Standards and Practices|About CBC News