Seattle Seahawks fans throughout B.C. are gearing up for the Super Bowl this weekend by raising flags and showing off their 12th Man pride.

People in B.C. are raising Seahawks flags and donning team colours in anticipation of the big game 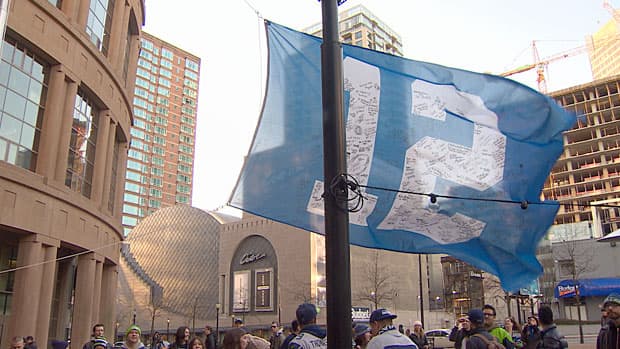 7 years ago
2:05
Flags were hoisted for the Seattle Seahawks in the Super Bowl 2:05

Seattle Seahawks fans throughout B.C. are gearing up for the Super Bowl this weekend by raising flags and showing off their 12th Man pride.

Thousands of Vancouverites have adopted the NFL team as their own, and will be donning Seahawks colours — blue, bright green and silver — when the team faces off against the Denver Broncos in New Jersey on Sunday.

"We're all about celebrating the relationship with the team and the fans, and the 12th Man knows no borders," said Seahawks marketing director Omar Mawjee at a 12th Man flag raising ceremony in Victoria on Friday.

Every NFL team has 11 members, but Seahawks fans are so devoted they have earned the nickname the 12th Man. As it turns out, the 12th Man is at least 10 per cent Canadian.

Click the video above to watch CBC's Deborah Goble's report on the cross-border love affair and what it means to be the 12th Canadian Man.