Vancouver’s food scraps program off to a rocky start

CBC News has obtained over 4,000 complaints filed within the first three months of Vancouver’s Green Bin program launched May 1st. 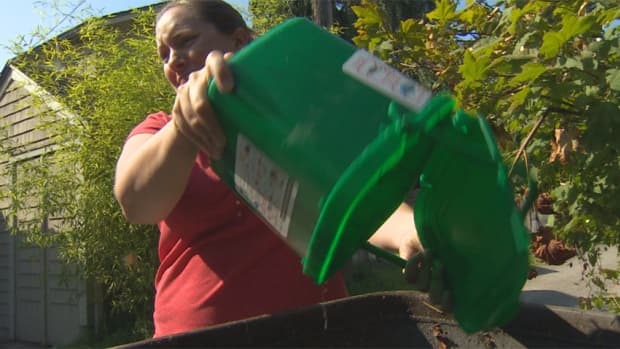 7 years ago
2:42
Critics say stinky garbage may have turned off some residents 2:42

If you were upset about having to dump your food scraps into the green bin this summer, you weren’t alone.

CBC News has obtained over 4,000 complaints filed within the first three months of Vancouver’s green bin program launched May 1.

One hundred thousand households were asked to separate out their food scraps and dump them, without a plastic bag, in their green bin with the yard trimmings for weekly pickup.

Maggots,flies, smell and hours of cleaning and scrubbing!!! I’m sick of these mandates.- Vancouver resident

The vast majority of the complaints were about missed pickups.

According city statistics, the total number of 311 calls about missed pickups spiked in those summer months from a total of 1,006 calls in February to 2,438 calls in August.

There were 7,012 missed pickups from May to July of 2013 — almost double the number of calls in the previous year in that same time period.

Many of the 4,000 complaints obtained by CBC News were about the stench of rotting garbage, flies, maggots and other pesky vermin that appeared from garbage being left out in the summer heat.

One complainant in the 800 block of West 14th Avenue wrote: “The stench of putrid rotting garbage wafts in my lane through my windows as the garbage pickup was plain and simply missed!... Why is this happening?... who is accountable from the City?”

One Vancouver household reported that their green bin had been missed six times in eight weeks in June, days before the city experienced the hottest and driest July on record.

“The lunacy is repugnant!” wrote another resident. “Maggots,flies, smell and hours of cleaning and scrubbing!!! I’m sick of these mandates. And the little green bin dropped at my home is inadequate."

Hal Kalman contacted the city about unwrapped food scraps attracting pests. He says he saw a rise in rats in his Kitsilano neighbourhood.

“Since the beginning of the food scraps program, there is evidence of more rats. We have seen them, which we never saw during the daytime. We’ve seen their droppings around the place,” says Kalman.

Kalman says he believes the idea was right, but the execution was faulty.

“It was rushed, it wasn't thought through, there wasn't enough consultation with experts. It was perhaps too politically driven and not technically driven.”

Residents turned off by the “yuck factor”

Colin Bell of VIP Bin Cleaning saw a 300 per cent growth of his business since May. He cleans bins in Metro Vancouver for a living. He said many residents got turned off by the “yuck factor".

“Once you kind of get that gross out factor people just say... I don’t ever want to open the lid again and see maggots crawling everywhere, so they get turned off completely," Bell said.

"I think that’s one of the risks of starting in a hot summer and also having some of the hiccups in the beginning. You might get a certain percentage of people who may never come back.”

CBC News recently did a spot check of bins before green bin pickup in one Vancouver neighbourhood and found half of them were empty.

The City of Vancouver estimates the rate of participation in the food scraps program is at 58 per cent.

“We’re happy with where we’re at now, but we appreciate that we still have a good chunk of people that we need to get participating,” said City Councillor Andrea Reimer, who is also part of Metro Vancouver’s Zero Waste Committee.

Reimer says the city expected a spike in garbage complaints with the launch of the program, and had an extra 20 people on staff to deal with the high volume of calls.

“We do a million pickups every month," said Reimer. “If we’re down to 4,000 as a number, that’s a doable number we can work with as a city.”

Metro Vancouver has a ban on food waste in the landfill coming into effect in 2015. Reimer says she is hoping for full compliance from all Vancouver residents within a year to 18 months.