Almost five months after an investigation began into the Stanley Cup riot, the first 163 charges have been recommended by police against 60 alleged looters and vandals, Vancouver police say. 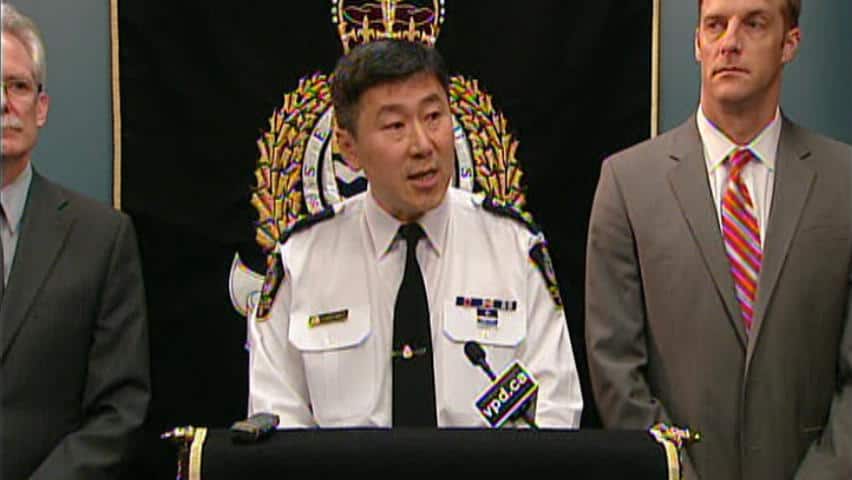 9 years ago
3:27
Almost 5 months after an investigation began into the Stanley Cup riot, the first 163 charges have been recommended by police against 60 alleged looters and vandals, CBC's Chris Brown reports 3:27

Almost five months after an investigation began into the Stanley Cup riot, the first 163 charges have been recommended by police against 60 alleged looters and vandals, Vancouver police say.

The charges still need to be assessed by Crown prosecutors before they are actually laid, Neil Mackenzie, the spokesman for the Crown prosecutor's office, said during the announcement Monday morning at Vancouver police headquarters.

Chief Jim Chu said the charges were recommended after new image analysis technology was used to create a searchable database of 30,000 YouTube videos and Facebook images to enable police to find matching evidence of suspects and crimes.

The special image analysis, which was done at a special facility in Indianapolis, cost about $300,000, he said. Chu outlined three specific cases in which the police were able to use the special technology to link suspects to video evidence.

Analysis by the numbers

In one case, a 21-year-old man came forward to admit to one crime, but was linked to several others including the damaging of six cars and three break-and-entries.

In a second case, another 21-year-old man was linked by DNA evidence to some offences, but video analysis linked him to an additional assault on a victim on Robson Street and the looting of some shops.

In a third case, a man wearing a white belt who was photographed smashing a shop window was quickly linked to evidence of possession of stolen goods and arson enabling charges to be recommended.

"We still expect hundreds of charges to be laid. Stay tuned because in the next few weeks we'll will be posting more images," Chu said.

Chu said the investigation was the largest in the city's history and he expects the massive investigation involving thousands of cellphone and video camera images will result in the most charges of any Canadian investigation.

Investigators have identified more than 15,000 criminal acts on the videos and between 500 and 700 people may be charged by the time the investigations are concluded, Chu said.

Charges by the numbers

Already the images of 125 suspects have been posted by police online in an effort to have the public help identify suspects. But police expect it could take up to two more years until a complete list of charges is laid.

The Vancouver police have been heavily criticized for the slow pace of the investigation, but have said it is necessary to ensure the maximum number of charges will be laid.

"Over the past few months there have been those who told us that our decision to be thorough was wrong. They urged us to rush cases to court," said Chu.

"But we believe the public expects more from the police. We believe the community supports the independence of the police and our professional judgment to conduct thorough investigations, not cut corners in order to satisfy the vocal criticisms of a few," he said.

As a result of the investigation, the department now has the ability to continue combing through the thousands of images, linking partial images of people with other images of crimes in progress, he said.

"We now have the ability to identify rioters who masked up, simply by tagging the group they were with and examining these videos from other locations," he said.

George Moen is the president of Blenz Coffee, whose West Georgia Street store was trashed by looters and rioters.

Moen said his civil lawsuits will depend on information unearthed in the police investigation and he's happy to see police take their time.

"There is a real risk in a rush to justice that a few innocent people can get caught up. There are enough people involved in this thing. Let's get the people involved, take care of it, and then move on," he said.

Police have not released an estimate of the final total cost of the investigation, but said the department is in talks with the province for more funding.

The riot broke out after the Vancouver Canucks' Game 7 loss in the Stanley Cup final on June 15. Rioters spent hours torching cars, smashing windows and looting stores in the city's downtown core, causing millions of dollars worth of damage.