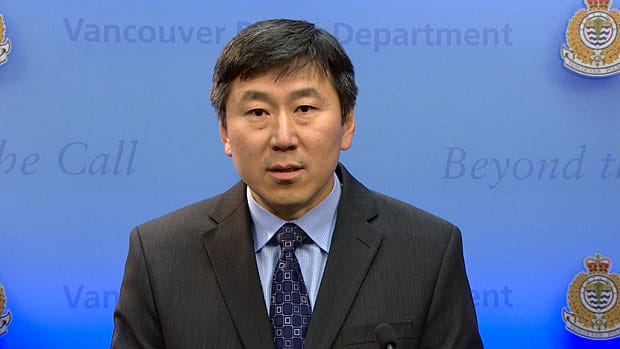 8 years agoVideo
0:28
Jim Chu says they could have and should have caught serial killer Robert Pickton sooner 0:28

"On behalf of the Vancouver Police Department, I would like to say we are sorry again to the family and friends of the murdered and missing women. We could have and should have caught Pickton sooner," Chu said.

He noted that procedures have since changed and any missing person cases in the Downtown Eastside are now treated as high priority.

But Chu was non-committal to recommendations that Metro Vancouver's fragmented mix of municipal police forces and RCMP detachments should be replaced with a Greater Vancouver police force, saying there is already a high degree of integration between the forces.

The apology follows the release of the final report of the missing women inquiry by commissioner Wally Oppal on Monday that blamed "blatant failures" by police for allowing the serial killer to operate undetected for years on Vancouver's Downtown Eastside.

Oppal said those causes included discrimination, a lack of leadership, outdated policing approaches and a fragmented police structure in the Greater Vancouver region.

After the report was released, Chu issued a statement that said, "We know that nothing can ever truly heal the wounds of grief and loss but if we can, we want to assure the families that the Vancouver Police Department deeply regrets anything we did that may have delayed the eventual solving of these murders."

Pickton was arrested in February 2002. He was convicted on six counts of second-degree murder and sentenced to life in prison in 2007.

The remains or DNA of 33 women were found on his pig farm. He once told an undercover police officer that he killed 49 women.

Chu was not chief of police at the time of the Pickton investigation.