Investors interested in the fledgling legal marijuana industry are gathering in Vancouver to discuss ways of capitalizing on the so-called "green rush" in the wake of new federal rules banning home-grown medical marijuana.

Conference brings investors together in Vancouver to discuss financial opportunities 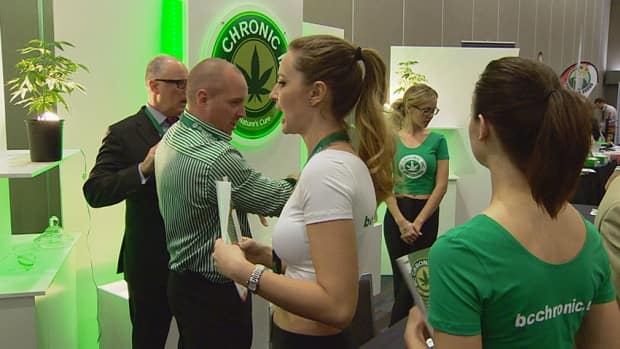 7 years agoVideo
2:47
Delegates at Vancouver conference want to get in on 'green rush' 2:47

Investors interested in the fledgling legal marijuana industry gathered in Vancouver Wednesday to discuss ways of capitalizing on the so-called "green rush" in the wake of new federal rules banning home-grown medical marijuana.

The conference is being organized by Vancouver-based Next Gen Metals which is expanding its investments from mining to marijuana according to its president Harry Barr.

Barr says Next Gen intends on becoming a major player in the new, legal industry and claims metals and marijuana are a natural fit.

"It is a brand-new industry. It's just about as exciting as a number of discoveries made over the years," said Barr.

The Green Rush Financial Conference brought together investors to discuss the financial opportunities in what Barr sees as a multi-billion dollar opportunity in medical marijuana.

He says his company plans to provide venture capital to the legal marijuana industry.

In fact, his company is already seeing profits. Its shares went from five cents to more than 70 cents a share after the company sent out numerous news releases about its plans over the last few months.

However, the B.C. Securities Commission is warning investors, in general, to be careful whenever a new venture prompts any kind of a rush. It says investors need to know that many of them will fail.